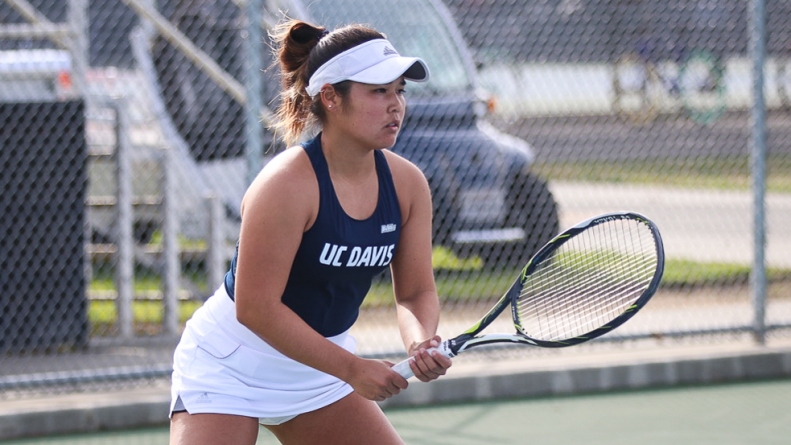 Third-year design major Sara Tsukamoto is a force on the UC Davis women’s tennis team in both doubles and singles. The Kailua, Hawai‘i native began playing tennis at the age of three, following in the footsteps of her mother and her siblings. But it wasn’t until the age of nine that Tsukamoto began getting serious about playing.

A four-star recruit, Tsukamoto was ranked No. 113 in the nation and No. 3 in the state of Hawai‘i when she was recruited out of high school. As a freshman at UC Davis, she ended her first season with an undefeated 4-0 record at the number three doubles spot with her partner, senior Nikita Pradeep and a 11-0 record as the number five singles player. By her sophomore year, she posted a 13-11 overall singles record, playing mostly at the number two spot and was awarded a Big West Conference Honorable Mention for Singles.

The California Aggie sat down with Tsukamoto to discuss her start in tennis, how she manages her time at UC Davis and her collegiate career so far.

The California Aggie: Was tennis a family sport for you?

Sara Tsukamoto: Yeah — my mom played. My dad likes to say he played, and I don’t think he did that much. And then my sister actually played all throughout her years up until high school. She was really good in high school, but she just didn’t play in college. And then my brother also played. So yeah, it was definitely a family sport.

TCA: What made you decide to continue playing tennis in college?

ST: I just love playing tennis every day. And I definitely wanted to keep playing once I graduated high school. So I wanted to choose a school that was good at tennis and academically, and UC Davis was just like the perfect fit for both.

TCA: How do you manage your busy schedule as both a tennis player and a design major?

ST: For me, what works is I just like to use my planner and just schedule things out. So for example, I don’t have class on Monday. So I’m like, “Okay, Monday morning I’ll practice [individually] all morning and then also do practice with the team. And then after practice, I’ll go home and just study.” So I just make plans like that to find a balance between both.

TCA: Can you talk about your experiences as a design major and how you’ve liked the program?

ST: I’ve recently just switched into the design major. It’s been difficult at times because design has a lot of studio time, which is like a three-hour class period. So it’s either from 1-4 p.m. or 9-11:50 a.m. So that sometimes interferes with practice. But other than that, it’s been a lot of fun. Right now I’m taking classes towards textile design. So we do screen printing and a lot of stuff on Adobe, which is really fun. It’s fun to see what you can make.

TCA: How did you get into design?

ST: Funny thing, my dad was actually a product design major, I think, so he was telling me about it, and I just liked creating stuff and the creative side of design. So I took Design 1 in the fall my sophomore year, and I really liked it. I just started taking more design classes, and I just got really into it. So I was like, “Might as well just be a design major.”

TCA: Looking forward, what do you hope to do after graduating college?

ST: What I hope to do is work for an athletic company to work on textiles and stuff like that. Kind of related to fashion, but also, including textile design and patterns. Like [working for] Lululemon or Nike — that would be really cool.

TCA: You’ve been playing pretty well recently. Overall, how have you been feeling this season?

ST: I’d say I’m definitely doing a lot better than my previous years. I know I’ve been starting off rocky — definitely my freshman year and my sophomore year. But I think playing number one this year, I have to be solid in order to win. So I think I’m just focusing on staying relaxed and playing my best because you are playing the best players from each school, so you can’t really expect to win every match. But as long as you just try your best you’ll get good results.

TCA: How do you think you’ve changed athletically over your three seasons with the team?

ST: I would just say I think I just realized, “Okay, I need to buckle down during the season.” Instead of focusing on so many other things, I just need to focus on school and tennis and some extracurricular activities in order to do well in both school and tennis.

TCA: What are you looking forward to for the rest of the season? What are your goals both individually and for the team for this season?

ST: I think our team goal is definitely to win all of our conference matches and hopefully win conference. I know some of the girls are injured or we have girls sitting out, so definitely when everyone can get back on the court, I know that we’ll definitely do a lot better and we’ll be a really good team. I think [Lauren Ko] and I — my doubles partner — we’re a really good team. So I’m hoping that we could definitely get ranked this year. So that’s one of my goals for doubles. And then for singles, hopefully get ranked or just have an overall good winning record after season.

Tsukamoto and the rest of the UC Davis women’s tennis team will be back in action at home this weekend when they take on CSUN on Saturday at 11 a.m. and UC Irvine on Sunday at 10 a.m.