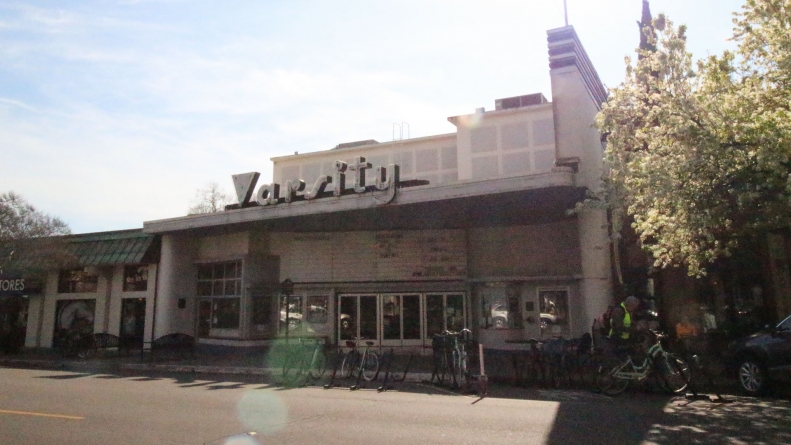 Students, employee reflect on the value of the venue as landmark, film house, gelateria

Driving down Second St., a celebrated and historic piece of Davis still stands in the form of the Varsity Theatre. The structure is known for its unique exterior, as it is one of two streamline moderne buildings that still stand in Davis. A part of the Art Deco movement, the building features aerodynamic lines and nautical elements.

Designed by architect William B. David, the cinema is one of 13 constructed in the Northern California region. David was also responsible for the construction of the Arcata Theatre Lounge, as well as multiple theaters in Sacramento. David also contributed to the creation of Hollywood sets in the 1930s, representing the form of the motion picture in multiple ways.

The Varsity Theatre has resided in Davis since 1921. Originally built on top of an old blacksmith shop, the theater moved to different locations downtown before settling at the spot it currently resides at. As newer cinemas were built, the Varsity was used as a performing arts center until 2005, when it became a single-screen art house cinema.

Whitney Martinez has worked at the Varsity Theatre for 14 years, ever since the theater reopened its doors in 2006.

“Originally, when Varsity first opened in the ’50s, it was the first movie theater in Davis,” Martinez said.  “[Now,] we bring in very unique films, films that you would never hear of, and it’s really cool to be exposed to that different genre.”

The theater is not only a historic landmark, it is also an integral part of the community given that it is owned by the city of Davis.

“The city does own the building, so we have a lot of city events,” Martinez said. “We have the MLK celebration every year, as well as the UCD film fest. It’s cool that we have this venue to offer.”

The multitude of ways that the Varsity has served the community allows it to be a dynamic feature of Downtown Davis, providing a space for people to gather. Indigo Kelly, a second-year cognitive science major, talked about her experience.

“I went there a while ago and I loved it,” Kelly said. “It was very old-timey, and I loved that there was a little gelato place connected to it. I feel like people don’t go to movies enough, and they have super cool old independent films.”

As moviegoers compete with the ever present comfort of Netflix, students voiced a sadness regarding the change in the times. Alison Newens, a second year, agreed with Kelly’s sentiment.

“It is such a good way to go out with friends, instead of just lying in bed,” Newens said. “It’s a whole experience, from the popcorn to the place, whereas staying at home just isn’t like that.”

The well-known theater continues to be a force in the Davis community: It brings together cinema and people to form the venue that it is today. With its unique showings and exuberant decor, the Varsity remains a staple for the most enthusiastic moviegoers.