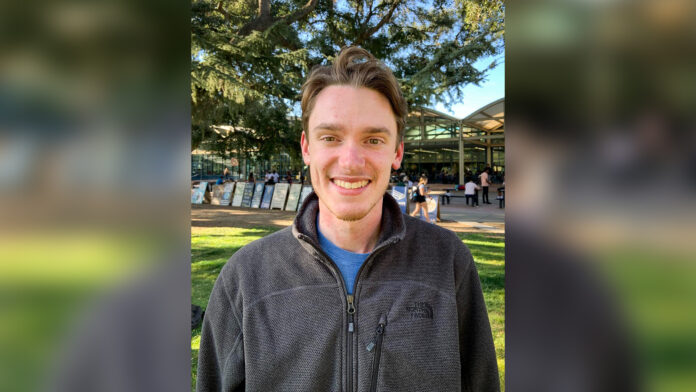 Kyle Krueger, UC Davis’ new ASUCD president-elect, ran on a platform that supported environmental justice through the establishment of affordable housing that is close to campus, hoping to reduce student commute time. As an evolution, ecology and biodiversity major, Krueger connected his policies with his own personal values. The California Aggie sat down with Krueger to learn more about him, beyond his involvement in the political campaign, to get a deeper look at the new student body president.

Growing up in Cleveland, Ohio, Krueger had moved to Orange County before beginning at UC Davis in Fall, 2018. That was a major transition, as he found drastic differences between the Midwest and the West Coast.

He reminisced on his experiences in high school, saying they portrayed the contrast between the two states. This difference, he said, stemmed from an acceptance of a variety of hobbies and passions, something that he thought California embraced.

“I remember cross country,” he said. “In Ohio, it was like, ‘Football or bust.’ When I came here, everyone was like, ‘Oh, cross country, that’s so cool.’ Even that is a small example of the cultural difference between the two.”

Krueger also mentioned his passion for birdwatching. In his free time, he enjoys going to Putah Creek and immersing himself in the natural world. He first began birdwatching in fifth grade, and it has since become one of his favorite hobbies.

“It’s very calming,” he said. “When you are focused on looking for a bird, or trying to find a cool species, it’s your entire focus. It’s also nice to be in nature as well.”

One of his favorite moments birdwatching was when he was in Oklahoma looking for a bird of the painted bunting species.

“I was there visiting family, and every morning I would wake up at 5:30 a.m. with my uncle to look for the painted bunting,” Krueger said. “We would spend hours looking for it. On the last day, it kind of fluttered down. It’s this really brilliant bird. It’s got red, blue, green — that’s why it’s called the painted bunting. Just in terms of cool moments, that bird sticks with me.”

The conversation then transitioned to the topic of  books — his favorite being “Superforecasting” by Philip Tetlock.

“It’s about how this scientist demonstrates how people who take in lots of different ideas and theories and put them together tend to be the best at predicting the future, rather than looking at the world from a specific angle,” Krueger said. “Those sorts of books definitely challenge me to think in different ways, and I enjoy that.”