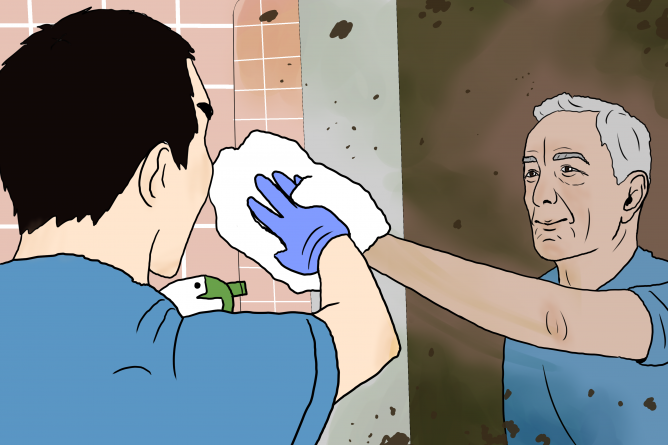 6:00 a.m. Monday morning. The temporary, futile, nugatory joys of the weekend now seem like a long-lost dream, much like the one that was just violently pierced, shattered and hopelessly obliterated by the blaring perturbation of your trusty alarm clock — the only honest, reliable thing in this chaotic world that you can believe in anymore. And what does that shrill shriek mean? It means it’s time to get ready for work. Where do you work? Everywhere. When do you work? All the time. What do you do? You clean up other people’s messes. Literal messes. Metaphorical messes. At the end of the day, they’re all the same, whether you’re a high school janitor, the Mayor of New York City or the head of a large media company.

And how do you prepare for this day of cleaning? By cleaning, of course. First, by wiping the smears off the lenses of your glasses — the glasses that your insurer won’t update for another six months — so you can marginally-less carelessly careen out of bed and mindlessly meander into the bathroom, where you find yourself face-to-face with a cadaverous, haggard, hollow-eyed, pasty-faced creature. It’s you. A sense of dread overwhelms you as you begin to recognize this distorted version of yourself. A few discernible features are there, yes — like your graying hair, intensifying wrinkles and eternal frown, all manifestations of your internal scars from the 2016 election — but this figure isn’t really you, is it? In the mirror, you see a resentful, disgruntled American who’s mad as hell and isn’t gonna take it anymore. Someone who wants systemic changes that can transform America into a more liberal and progressive place where people like you don’t have to live paycheck to paycheck and worry about breathing polluted air and drinking contaminated water. Someone who wants to disinfect the corrupted White House and remove the dirty stain on American politics that is Donald Trump.

But that’s not you. You aren’t that hopeful and idealistic. You’re a simple person, and the only things you care about are simple pleasures, like a nice, hot morning shower to cleanse your body and soul and to clear your head of all those unhealthily optimistic thoughts before a miserable day of cleaning up messes. You’re still just barely awake, and the relaxing steam from the shower makes your mind wander. Scant details of your recently-interrupted dream begin coming back to you. You’re in front of a crowd, a crowd paid to cheer for you as you speak into a Mike. It’s only March, but the flowers are already in Bloom, and the iceBergs are melting.

An ice-cold blast of water shocks you back into consciousness as the hot water heater runs dry. After drying-off, you again look in the mirror, but despite emerging from the shower clean and refreshed, you are still unable to recognize your own reflection. It is at this exact moment that you finally comprend the meaning of your enigmatic dream. And now, you know what to do. You kneel down, reach in the cupboard and pull out a cleaning rag and a bottle of the best disinfecting agent on the market: Clorox.

You begin spraying Clorox all over the mirror, that dirty, disgusting, besmirched, smudged, smeared, stained, speckled, splotched, splodged mirror. You take the rag and begin scrubbing it, disinfecting it, polishing it. You stop to dry it, pat it down and frisk it, if you will. The mirror is now squeaky-clean, and in it you finally see a crystal-clear reflection of the person you know and love, the person you really are: a milquetoast, charisma-impaired, change-averse, quite possibly racist but confusingly still anti-Trump, quasi-center-right Democrat.

Just like me, Mike Bloomberg (not a socialist). Clorox, just like socialism, isn’t free. $4.99 per bottle. Splurged by Mike Bloomberg.