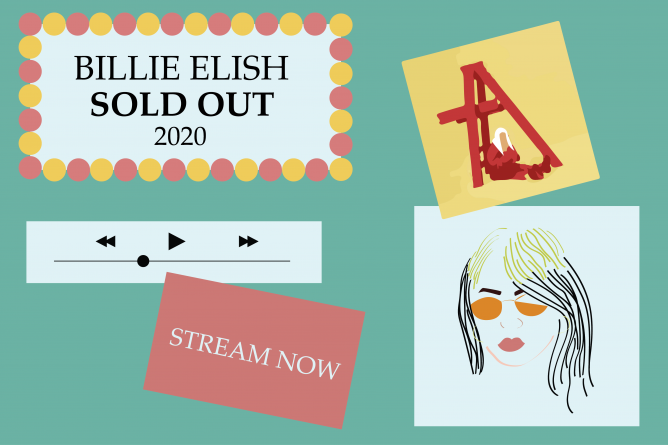 Billie Eilish — the creepy-crawly, mega pop star — has become a household name, seemingly jumping into a premier level of stardom instantaneously. Now, with four major category Grammy Awards and a top-charting debut album, “When We All Fall Asleep Where Do We Go?,” Eilish has established herself as a force to be reckoned with in the music industry. She also just turned 18.

Her fame is not only encompassed by her accolades. Eilish herself — her fashion, her personality and her endearing shock factor — have become part of her charm to her fanbase. A question, however, still remains: Is Billie Eilish cool?

Of course, cool is subjective, and the term can hold a variety of connotations. Yet, I am referencing the instinctual, gut feeling. The moral compass that determines right from wrong, cool from not cool. You know the feeling. As much as I could point to quantitative evidence to warrant an interpretation of coolness, my gut compass couldn’t do the same. I decided to turn to the student body to help determine the answer.

Emma Ryan, a fourth-year political science major, has been hooked on Eilish since she saw her “when the party’s over” music video. Eilish’s sound, hypnotic and complex, piqued Ryan’s interest.

“I really have not heard an album like that before,” Ryan said. “I thought it was so cool, just the sound effects and every song is so different, too. They have weird sounds making up the bass lines. It’s not all typical instruments. Sometimes it’s even a person clicking their tongue.”

While intrigued by her “steezy vocals,” Ryan’s interest was maintained by the concept of the music video itself. With the simplicity of black liquid streaming from the young artist’s eyes, a grotesque depiction of tears, Ryan instantly found the young artist unique.

“I felt like she was more,” Ryan said. “It was really well thought out and delivered on her part, versus just like some angsty bands that decide to paint black on their face. I saw that [the black paint] was real and it didn’t have any effects. I saw her dedication to that — apparently it burned. She said how much it hurt in an Instagram caption. And also the song is just beautiful.”

Ryan pointed to other examples of Eilish’s dedication and care taken into her music: Her “Hostage” music video was choreographed by her and the voice distortion in “xanny” is supposed to make the listener feel as if they are walking through smoke. Attention to detail and tangible effort in the production of her own music convince Ryan of Eilish’s coolness.

“I think everything that she’s doing has a lot of thought behind it,” Ryan said. “I can tell that she cares about it, and it’s not just about making money, getting famous. It’s about just sharing her experiences and putting into the world and validating others. She’s a phenomenal storyteller.”

The successful dichotomy of Eilish might rest in the fact that she is considered just as complex as she is relatable. Second-year communications major Ryan Cohen admires the artist primarily for this reason.

“She seems genuine,” Cohen said. “She seems like a real human. I see videos of her dancing around on stage, and she looks like a kid like having fun, which I totally love. I just see someone who is pretty stoked to be performing and really genuinely happy to be killing it. She could be my friend, easily.”

This relatability is what makes her music approachable and digestible without having to directly correlate to the listener’s own experiences. She pushes her listeners to consider her ideas and toy with new concepts. For example, “bury a friend” from the album “When We All Fall Asleep, Where Do We Go?” is about her experience with night terrors. And even more directly, in interviews, Eilish has commented on her own struggle with her mental health. One of her most recent singles, “everything i wanted,” was inspired by a dream she had in which she committed suicide and “nobody cared,” she told BBC Radio 1.

“It is cool because she can comment on how bad her mental health was with her music,” Ryan said. “She would say, ‘I was in a horrible state, but I’m so much better now.’ And that’s how I would react to my own issues, and that makes me feel like it isn’t like a product. She can even laugh at herself. I do think she comes off a little cold and standoffish, but I think that’s just her not forcing herself to be polite.”

Her genuine persona, however, can easily be a product made by the music industry. Yes, she might be open about personal experiences, and those do not have to be questioned for their validity. But ultimately, the music industry functions as a business, and might serve as the motivation to share these experiences.

Tapping into these boundary-pushing sentiments would be acceptable for her target fan base: tweens who are increasingly exposed to more progressive ideals. Talking about more deptful or serious issues might be what her target population desires. Afterall, Eilish has a team of 16 people who have helped develop and brand the individual since her breakout, DIY Soundcloud single “Ocean Eyes.” In no way — especially in the context of the modern music industry and her impressive level of stardom — can her success be contributed to her alone. She cannot be considered a solo artist in the purest form.

More specifically, Eilish’s professional relationship with her brother is often an area of contention to support such a notion. She has not been quiet about the high activity her brother has had on her music making process, especially as a lyric writer. Indeed, in her first Grammy acceptance, Finneas accepted the award with her on stage.

“I don’t have anything against Billie Eilish, I just think that her rise to fame is mostly credited toward her brother who writes all of her lyrics and produces all of her songs,” said Leah Rossi, a first-year genetics and genomics major. “I think that it is easier for Billie to be the face of their music because with vocal lessons she is able to harness her sounds, however, without her brother the only thing she would have is the ability to sing, which doesn’t cut it in industry if you want to be self-written.”

Eilish’s fans have nonetheless defended her relationship with her brother as collaborative rather than exploitive.

“I like seeing her interact with her older brother who’s kind of the person that made her famous [in] a lot of ways,” Cohen said. “And that’s how I acted [with] my siblings. I think sibling dynamics are pretty raw.”

“[everything i wanted] began with a screen grab that said something like ‘I love my brother,’” Ryan said. “It’s a line of defense almost against people that have been criticizing their relationship. She talks about how much she loves Finneus as her brother and her working partner, and how she would not be where she is without him. She knows that and recognizes that. I think that’s why he’s out there on stage performing with her. He goes on tour with her. When they sing ‘i love you,’ it’s just the two of them on stage. I think that is special.”

Another criticism of Eilish, which might diminish her cool potential in a serious way, is also what she has been praised for: her fashion. Her baggy, brightly colored fashion, which she claims is to purposefully limit the gaze of her body from the public eye, imitates 90s Black female rapper style. More significantly, she has not credited this historically oppressed group as her inspiration, or acknowledged this correlation. There are real and serious socially questionable aspects of Eilish’s image that cannot only limit her coolness but demonstrate her inability to recognize the larger responsibility that accompanies world-wide fame.

Ultimately, Eilish is 18-years-old — her character is not solidified, and she is going to make mistakes in her young career. Although that’s no excuse for potential social injustices, it does not mean her potential for growth had stagnated.

“It’s hard to be like, ‘That doesn’t feel like Billie, because who is Billie?” Ryan said. “She’s changed so much from her two albums. But […] what makes it Billie Eilish: It’s refreshing, it’s changing and it’s engaging. I think [her music] has always been more than just her singing songs. It’s just like her contribution to the world, and it is genuine, new and refreshing. I think she does it without being afraid of what other people are going to say because she wants to express herself, and I think that’s cool.”