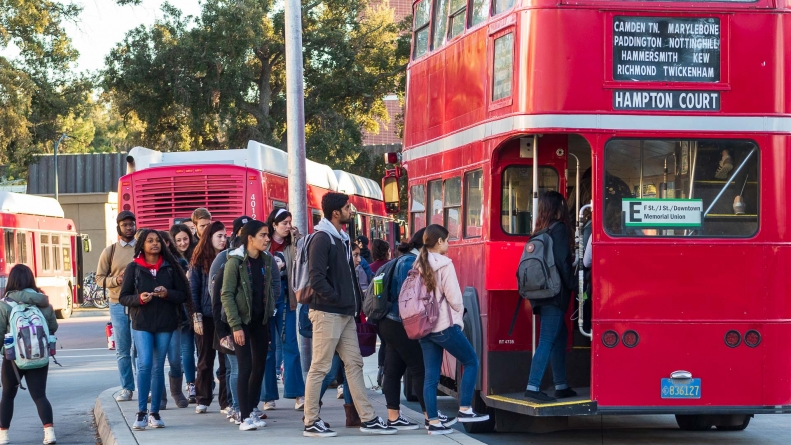 The bill prohibits California Community Colleges, CSU and UC administrations from charging students mandatory tuition or fees that would go toward any transit service required to allow students the free transit passes.

The central idea of the bill, according to Holden, is to combat the greenhouse gas emissions made by the state’s largest source of global warming pollution — the transportation sector. It would also combat the high cost of attending college and the cost of commuting to and from campus each day.

Under this bill, if transit agencies fail to provide free transit passes to students, the agencies would become ineligible for state funding provided under the Mills-Alquist-Deddeh Act, the State Transit Assistance Program or the Low Carbon Transit Operations Program. According to Jeff Flynn, the Unitrans general manager, the transit system receives $1 million in funding from the state per year. As of now, there are no alternative sources of funding provided in the bill.

“I see two different pathways for us,” Flynn said. “One is that we give up the $1 million; we continue to levy the student fee that was voted on and approved by the undergraduates in lieu of the million dollar annual funding. [The other is that], we stop levying the fee on undergraduates and keep [the] million dollars [in state funding].”

If Unitrans were to stop accepting undergraduate fees in order to cover the operation costs of the bus system “that would essentially make us have to cut service by 60%,” Flynn said.

The bill is young, and the true consequences on UC bus systems and student fees has yet to be seen.

“If this bill were to be enacted, I’m not quite sure how we would change these fees as a result,” said UC Student Association President Varsha Sarveshwar via email. “But I’m not worrying about that just yet.”

Despite the uncertainty, many organizations including the UCSA, MoveLA, Transform and Environment California have come out in support of this bill.

“This bill would significantly impact students, who are increasingly spending more and more of their money — money they need for rent, food, books, etc. — on transit,” Sarveshwar said.

The first policy committee for this bill is expected at some point between March and April, but as Holden stressed, this issue is time sensitive.

“Young people have the most at stake, as the impacts of climate change will only worsen over time without bold action,” Holden said. “As a father of five, there is nothing more I think about than the future my generation is leaving for the next. That is why I am committed to making sure we do everything we can to stop the worst effects of climate change before it is too late.”