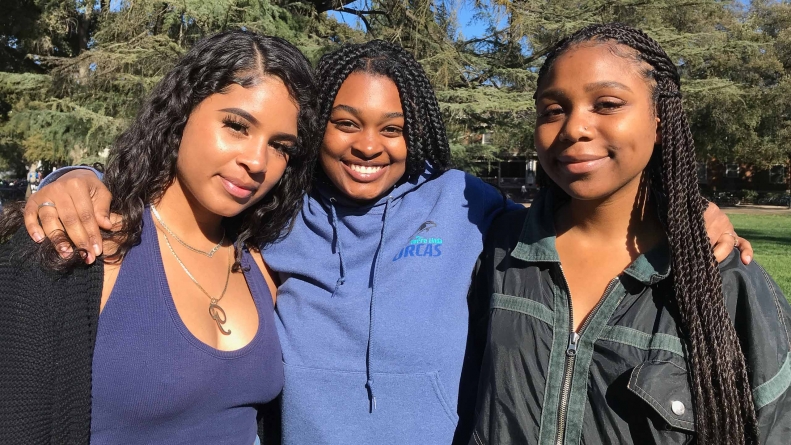 Thick, textured hair is a blessing, one that reflects beauty of a culture, community

Tiana Williams, a fourth-year cinema and digital media and African American Studies major, likes to wear her hair in a high puff, where her natural, coily curl pattern shines. Williams styles her hair daily and makes sure that it receives exactly the kind of attention Black hair was meant to receive.

Although she embraces her curls today, Williams said she didn’t always have a positive relationship with her hair.

Growing up, Williams said getting her hair done was an intensive process. “Hair time” was comprised of her mother pulling and combing through the kinks and tight curls of her hair. Experiences like these made Williams unaware of her own natural curl pattern and more excited for relaxers at a young age.

“It was always a traumatic experience getting your hair done,” Williams said. “I was always looking forward to that relaxer.”

Relaxers are chemical hair straightening treatments, akin to blowouts, used by many people to keep hair sleek and straightened for months at a time. These treatments, however, can create damaged and brittle hair.

Williams said her mother encouraged her to use relaxers to have long, straight hair. Williams feels a generational gap is responsible for her mother’s preferences toward straight hair and staying away from the scissors.

“It depends on the generation,” Williams said. “In her generation, I mean, they went from the Black Power Movement with afros to the eighties, with jheri curls to the nineties, with weaves being in. I’m not sure how this was secured in her mentality that straight hair was better, like, ‘Long, straight hair is good.’ And so she was like, ‘You’re usually not allowed to cut your hair,’ that was not a thing. You just don’t cut your hair, ‘cause it’s so important to us and it’s so hard to get it to grow sometimes and to really learn your hair. I think my mom and I have very different experiences with our hair.”

Angelina Uzzle, a second-year Spanish major, said her mother, who was born in Georgia, also straightened her own hair when she was young.

“My mom’s mixed, and she used to get a lot of perms when she was younger,” Uzzle said. “The curl in her hair is really damaged. So now she can’t wear it natural, ever. Now, she gets it straightened every two weeks.”

Like Williams, Chara Andrews, a fourth-year cinema and digital media major, said she felt frustrations about her hair growing up.

Andrews described a similar experience of a painful combing routine. Growing up in a predominantly white community, Andrews straightened her hair to blend in with her white peers.

Her personal and ongoing relationship with her hair inspired her to produce a film which she is currently working on. The film will explore the perception of Black and mixed people’s hair with regards to American beauty standards.

“I want to examine how we’re treated in society when it comes to our hair and the definition of beauty,” Andrews said. “I really wanted to look at this inception of this whole perception of curly hair, nappy hair, kinky hair is not beautiful. I want to challenge that.”

For about 10 years, Andrews wore her hair in long dreadlocks. Today, her hair is styled into a short, curly afro. Andrews said her short style saves her time and gives her more hair autonomy.

Although some styles require less time and easier self-manipulation, for some Black students, styling their hair means buying a plane ticket home.

“Usually at home I wear my natural hair,” Muhammad said. “But I got a weave because I knew that nobody out here would be able to do my hair. I did get [my braids] done in L.A. because I couldn’t find anybody here.”

For many students like Muhammad, especially those rocking protective styles like box braids or twists, finding a capable hair stylist in city as small as Davis seems nearly impossible.

“Nobody can do your hair out here, so I have to wait until I go back to San Diego to do anything to my hair,” said Carla Castro, a second-year neurobiology, physiology and behavior major. “If I did want to change it up, I’d have to wait ‘till I go home, and this year, because I’m a second-year now and my classes are harder and more time-consuming and they’re expecting a lot more from me, I feel like I don’t have the privilege to go home as much as I want to.”

Davis is home to almost 70,000 people, and according to the 2010 Census, fewer than 3% of those people identify as African American. This low percentage is reflected in the limited Black and African American institutions, such as hair-care and beauty supply stores in the city.

As Williams put it, Black hair requires a lot of “T.L.C.” Daily moisturization and infrequent manipulation or protective styling require lots of products that can be costly and add up quickly. Individuals must pay stylists if they seek a more professional or complicated style they can’t do on their own. In addition, the frequent upkeep requires a lot of time, which can be burdensome for students.

“I got braids recently because I just wanted to give my hair a break,” Muhammad said. “I was running out of time having to do my hair all the time before class and things like that. This is low maintenance.”

Eman Earlene Moore, a fifth-year theater and dance major, said styling her own hair and maintaining it would often interfere with her academics.

“The difficulty for me was finding the time,” Moore said. “Sometimes it takes a long time to do certain hairstyles, especially if you want them to last a long time. Sometimes it’ll bleed into my study time, and I’ll kinda fall behind.”

Moore had a lot more time on her hands to focus on her well-being and her academics once she decided to do a “big chop” and cut her hair very short.

“My second year here at Davis, I cut my hair,” Moore said. “I knew I could do it. I wanted to, so I did. It was another thing just to see another dimension of myself and another side of myself that I hadn’t seen before. It was very liberating. My hair was cut and I was able to focus on myself and my studies at the same time. It was a very nice experience.”

Before high school, Moore said she used texturizers and chemicals to straighten her hair. But she said the chemicals left her hair damaged and brittle. With her mother working a lot, these products were meant to make her hair more “tamable” and easier to manage.

Since then, Moore has been doing her own hair, and she’s always changing up her styles, whether long or short, without chemicals or heat.

With the wide catalogue of styles, Castro said she wishes there were more resources for Black students to learn and share tips on hair care and styling.

“I feel like there also should be maybe a club on campus, or even just like an organization that teaches you how to do your hair,” Castro said. “I don’t know how to braid. There should be a little tutorial for girls that never got taught how to braid. I wish I could braid my hair, that would save me so much.”

For now, Castro said she relies on YouTube tutorials and videos for guidance on styling her natural hair and keeping it healthy.

A common concern for Black students is keeping their natural hair healthy. While costly, Black female students understand the risks when chemicals are involved, which is why many Black students choose to rock natural and/or protective styles, despite time and monetary sacrifice.

What’s probably more prevalent and controversial than the natural hair debate is what defines “good hair” and what defines “bad hair.”

In the Black community, “bad hair” has been described as hair that is “kinky,” “nappy” or “frizzy.” Meanwhile, “good hair” either flows down into long, shiny waves or is thick, full and very long. Today, however, more young Black people are changing this narrative and arguing that all hair is good hair.

“Any hair is good hair,” Williams said. “If you are able to grow hair, that’s good.”

Andrews also said she embraces all hair textures and styles, and that it is one’s confidence in their look that matters most.

“However you feel about yourself and see yourself, people are gonna recognize that, [whether] your hair is in an afro or straight or whatever,” Andrews said.

Black students like Williams and Muhammad said their hairstyles are at the root of their identities.

“I feel like how we choose to wear our hair is a large representation of where we are,” Williams said. “People may not realize this, [but] even how we choose to not take care of our hair in the morning because we’re running late indicates something about where we are as Afro women. We’re not going to be able to assimilate in the way that other races can into the European beauty standards.”

Muhammad agreed and, like other students, commented on how her hair has affected her perception of herself.

“I think all my confidence is stored in my hair,” she said. “If my hair’s not the way I want it, then it’s not right.”

For the Black UC Davis community, despite childhood experiences, misconceptions by their peers or times of hair-related frustration, their thick, textured hair is a blessing, one that reflects the beauty of their culture and their community. Students reiterated that Black hair is deserving of respect and care, and it is not a burden, but rather a source of character and pride.

UC Davis’ Black students continue to embrace their healthy hair in any and every style, both on- and off-campus. Black Aggies said the community they feel among each other continues to fuel more self-love and positivity toward their hair.

“If you can see other people doing something that you want to do yourself, you’ll be inspired to do the same,” Moore said. “Seeing other Black women embrace their hair, embrace their curls, it’s an amazing thing. It’s a form of resistance. I really like the fact that a lot of Black women are embracing who they are, their existence, their hair follicles, […] things that people don’t find attractive. We say, ‘Hey this is me, I love me at the end of the day, at the end of every day.’”