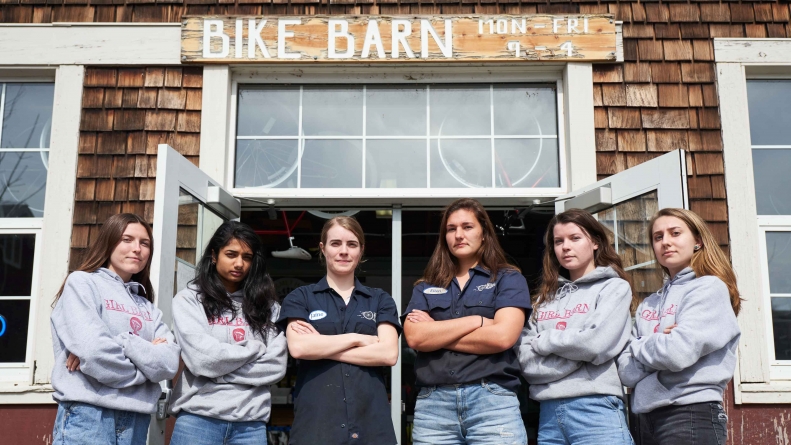 According to a UC Davis transit survey, 47% of the university’s student body bikes to campus daily. This not only entails lots of bikes, but also lots of bikes in need of repair. The Bike Barn, an ASUCD unit that serves as an on-campus bike repair shop, fixes over 10,000 bikes on campus each year. The unit would not have as big of an impact without the help of its female mechanics and managers.

Today, women make up about half of the employees at the barn, but this was not always the case. The institution of Girl Barn — a movement by the Bike Barn aiming to change the culture surrounding women in the mechanic field — has helped women working in the Bike Barn feel more supported in the workplace and move up the ranks in positions of power.

Officially started in late 2018, “Girl Barn” was the nickname employees used for Friday morning opening shifts at the barn, at which time four of the five mechanics on duty were women. Though this happened organically, the manager at the time, Christa Hoffman, quickly noticed and took advantage of the opportunity it presented.

Hoffman said she saw how many of the female mechanics on the shift were quick to tend to the managerial tasks that come with the job, like answering the phones and moving bikes, but they were missing out on opportunities to focus on mechanical tasks. Along with Molly Moritzburke, Hoffman decided to dedicate that Friday morning shift, dubbed “Girl Barn,” to more extensive learning for the women on duty while promoting female empowerment.

Around the same time, Hoffman and the other female mechanics at the Barn began discussing injustices that they were facing at work, such as not being taken seriously or not being treated like ‘real’ mechanics. She said these experiences happen quite often, and they affected both her and her female co-workers’ confidence in their work.

“It can be really disheartening as a female mechanic when somebody is subtly questioning [your abilities] or asking ‘Can I talk to a mechanic?’” Hoffman said. “Those small things make you question if you really have the knowledge you need.”

Through Girl Barn, female mechanics have been able to come together and share their experiences with customers and sometimes male coworkers, which has heightened the overall awareness of these issues and has led to a huge culture shift. Meg Davis, a third-year environmental engineering major and current Bike Barn mechanic, said the Girl Barn community has given her the courage to speak up when these issues arise.

“We are a lot more willing to speak up if we have a disrespectful interaction or something,” Davis said. “I’ve gotten a lot more comfortable saying and doing something about it.”

Although there is no set shift for Girl Barn this quarter, women who work in the shop say that the culture of Girl Barn is only getting more prevalent. This change in culture is obvious through the sheer number of women who are employed as mechanics and in managerial positions at the Bike Barn.

Clara Ginnell, a third-year biomedical engineering major and service manager at the Bike Barn, said that when she started, there was just one female manager. Today, three of the six managers are women. Additionally, at least half of the recent hires have been female. Ginnell and Davis were the first in their hiring class to become senior mechanics because of the extra learning experience that Girl Barn offered them through learning-focused shifts and workshops.

The culture shift at the Bike Barn hasn’t been strictly quantitative in terms of female staff. Many of the female workers say the message has helped shift the culture among not only staff, but among customers as well.

“When people come in, they continually see all or a lot of women up front — I’ve kind of stopped getting people asking, ‘Oh, can I talk to a mechanic’ comments,” Davis said. “It’s really anecdotally died down.”

Not only has Girl Barn improved the culture around female mechanics, but it has also had an impact on the lives of the girls involved, in and out of the Barn. Ginnell explained how being a part of Girl Barn has impacted her work experience and her overall experience at Davis.

“I have definitely built a lot of self confidence from working at the Bike Barn, I feel super supported in the workplace,” Ginnell said. “It’s just really cool to have a group of women who you have a shared experience with who you can always talk to about like school work that you’re struggling with, or Bike Barn stuff or personal stuff that you don’t usually talk about at a workplace when men are around.”

The women all expressed a love for the early Friday morning shift, when they often sit around the break table before opening — playing the Girl Barn playlist on Spotify, with over 20 hours of exclusively female artists — and talk about what’s going on in their lives, both at work and outside of it. Hoffman said working at the Bike Barn is her favorite thing that she has done during her time at Davis and expressed that the culture Girl Barn has created has been instrumental in her personal growth.

“Bike Barn has made me more confident as a person, a professional,” Hoffman said. “In everything, really.”