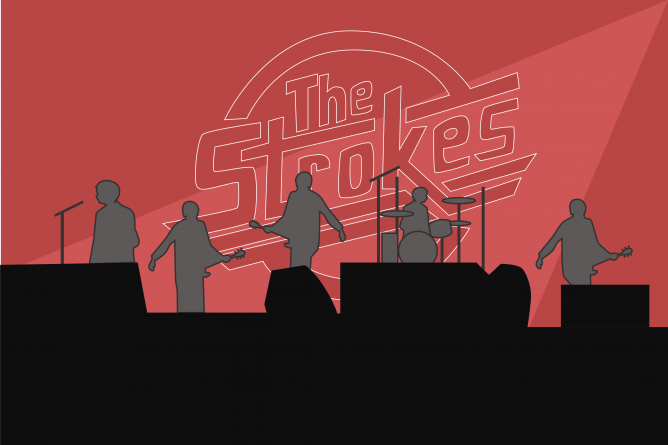 The long-awaited return of Casablancas and co.

The first time I touched down at JFK Airport, I remember the sounds that accompanied me more than anything. Carts whirled by, official announcements played on the speakers and planes roared for take off, all against the sonic backdrop of thousands of people coming and going.

Perhaps it is nature that comes to mind when one envisions exquisiteness, but in New York City, it’s quite the opposite. The urban expanse swallows you up almost immediately. Deep in the gullet of the city, you learn to embrace the concrete jungle. It does not spit you out — not until, of course, you are back at JFK. There is no band more adept at capturing these feelings than The Strokes, who recently came out with two new singles after a lengthy seven-year hiatus. Some things have changed, but much has stayed the same.

The Strokes were the official symbol of New York Cool in the early 2000s. While musically talented, it was mainly their anti-establishment charisma that appealed to many young people at the time, especially those who looked up to the musicians of the ‘70s and ‘80s — the same ones that The Strokes idolized in both sound and image. The subject matter they chose to focus on, however, was very much their own. Whereas bands like The Velvet Underground, who they were compared to endlessly, chose to illustrate an outlandish and eccentric New York, The Strokes decided to embody the anxieties and minutiae of post-9/11 young adult life.

Incredibly self-aware tracks like “Hard to Explain,” “New York City Cops” and “12:51” are all great examples to begin understanding this: Explaining a surreal night out, the blatant incompetence of the city’s finest and the moment right before you go home with somebody. These are all tales of the city, unedited and unchanged. The new singles bring the band back in full form, reminiscent of these times.

The first single, “At The Door,” came out roughly two weeks ago. Produced by the venerable Rick Rubin, it begins with a loud, walloping synth line that takes you right back to the 1980s, a decade from which The Strokes drew endless inspiration. Julian Casablancas, the frontman and singer of the band, lets his voice caress the listener — it’s equal parts rough and silky, a defining feature of his. Background voices quickly merge into a Gregorian harmony as Casablancas hits the chorus.

The lyrics give a glimpse into the context of the song. The pre-chorus lines “I can’t escape it / I’m never gonna make it to the end, I guess” seem like a callback to something The Strokes have always struggled with: hype. When major music publications began to notice them in the early 2000s, the band was hailed as the sole act bringing back good ol’ rock ‘n’ roll in a time when electronic and hip-hop dominated the airwaves. Seen by critics as the next Rolling Stones, The Doors or, most popularly, The Velvet Underground, Casablancas and the rest of his crew felt the heat of the media.

Naming their debut record “Is This It” was a middle finger to those same critics and publications that put them on the insane pedestal from the very beginning. “Is This It” was incredibly well received and rapidly fueled the hype train. Since then, with four albums and one EP released, nothing has received the same acclaim as their debut album.

The second single, “Bad Decisions,” drops the synths for a clean, catchy guitar riff: Think less Depeche Mode and more New Order. This is classic Strokes, even more so than the first track. The satisfying guitarwork, the captivating chorus and the lyrical content all paint a portrait of the self-sabotage that comes with city life. This is a subject they’ve explored deeply, most notably on previous tracks like “Taken For A Fool,” “Last Nite” and “Meet Me in The Bathroom.” As the title suggests, the song is mainly about making poor choices and is theorized by some to be about Casablancas’ father, who was absent emotionally for much of his life. Yet, the song could also be about what The Strokes have always tried to capture: The absurdity of living in a city, being young and making bad decisions. The beauty of the band has always rested in their laissez-faire attitude, and the songs have always been as deep as the listener wants them to be.

The Strokes were the coolest thing since fuzz pedals almost two decades ago, but what about now?

“Like most people, I like their older stuff,” said Sarah Thornton, a third-year cinema and digital media and anthropology double major. “I love to run while listening to them.”

Thornton admitted to being a big fan of the band, but she was surprised to hear about the new singles — “I thought they kind of faded away into the void?” she said.

Not everyone shares this sentiment.

Zoë Clevinger, a third-year viticulture and enology major, was excited about the new singles.

“The Strokes have a unique ability to make their songs sound so familiar and nostalgic, even if I’m hearing these two new singles for the first time,” Clevinger said. “Each song retains classic Strokes elements, and I’m excited to hear the rest of the album.”

It appears that long-time fans, like Clevinger, have been eagerly awaiting new releases. And, according to her, it’s been worth the wait.

When speaking of good art, it is usually a question of relevancy: How much did they succeed in capturing a moment in time? A feeling? When examining The Strokes, they invariably bottled up the early 2000s and the urban malaise that came with it. Fast forward nearly two decades, and the garage-rockers prove that they’re here to stay through strong musical offerings that cement their relevance.