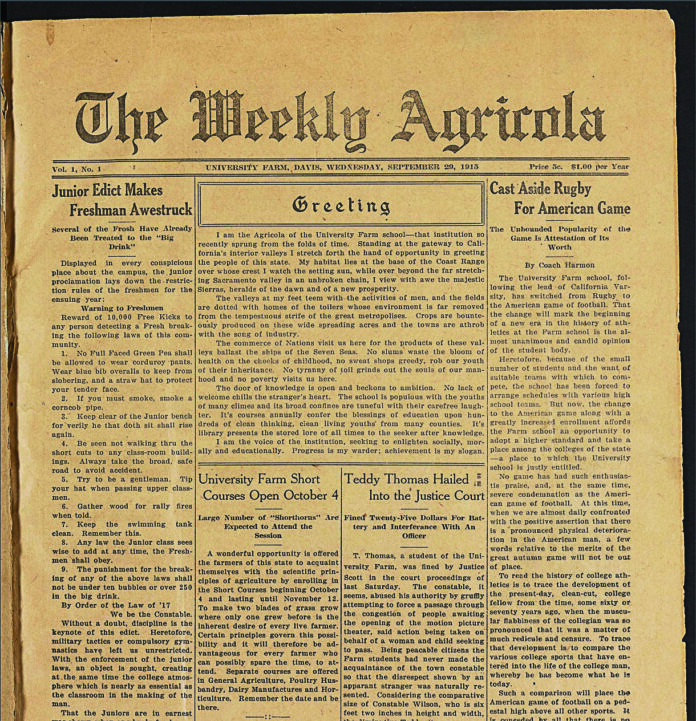 The California Aggie, formerly known as The Weekly Agricola, is the first undergraduate UC newspaper to digitize its entire historical collection. The California Digital Newspaper Collection (CDNC) — the online home of many historical editions of California-based periodicals — now showcases 5,410 issues of The Aggie. These issues date all the way back to the first issue of The Weekly Agricola on Sept. 29, 1915. The collection is broken down by year and month, has a keyword-search function and is available for download.

The idea of digitizing The Aggie was first brought up in October of 2016 by then Editor-in-Chief Scott Dresser, who worked at The Aggie from 2013–16 and served as the editor-in-chief for two years. Dresser met with Kevin Miller, the interim head of Special Collections and the university archivist for UC Davis at the Archives & Institutional Assets Program, to discuss digitizing the microfilm archives of The Aggie.

“I used to spend hours in the newsroom looking through our old bound archives, and I thought that these archives should be accessible to everyone,” Dresser said via email. “I think The Aggie is the most comprehensive piece of historical literature that exists for the university and the city of Davis.”

The Aggie and the UC Davis Library began outreach to former editors and UC Davis alumni for the digitization project, fundraising to support the effort. They attended UC Davis basketball games and other alumni events to gain support and raise funds. The project was fully funded by May of 2018, with the main funds coming from an anonymous, private donor who was a UC Davis alumni and a former reporter for The Aggie.

Brian Geiger, who worked on The Aggie’s digitization, is the director of the Center for Bibliographical Studies and Research at UC Riverside. He has been digitizing newspapers for over 10 years, partnering with a number of local projects throughout the state.

“[The Aggie is] digitizing the entire run for 1915 to 2014 — 79,000 pages,” Geiger said. “We’ve received about three-fourths of the pages from DVD. We had some hardware failures at the end of last year, and DVD couldn’t log in or work on their machines, so we sent all of your images to Laos, and they’ve been working on them there.”

One of the main differences in the digitization of The Aggie through the CDNC, however, was that the UC Davis Library handled the first part of the process, which included scanning the archived print newspapers.

“It’s been great working with the library, and it’s been a great project,” Geiger said. “There’s been talk about trying to do a UC-wide project like this, but in my experience, high school and college papers are not well preserved. It’s important to preserve them before they deteriorate.”

The digitization of The Aggie will enable UC Davis alumni, former members of The Aggie and other community members from the city of Davis and beyond to access old editions and see how the print newspaper has evolved over time.

“It kind of blows the paper wide open in terms of access,” Miller said. “It’s something the library has been really excited about. It’ll help us with our own reference questions. When somebody comes to us with a question about regional history, The California Aggie is the first place people will go.”

Jessica Nusbaum, the director of communications and marketing for the UC Davis Library, echoed this sentiment, reiterating the importance of The Aggie in terms of documenting the history of the university and the city.

“I think this has been a really lovely partnership between the library and The Aggie over the last couple of years,” Nusbaum said. “We sort of jointly hold the roles of being the storytellers of the university. As the student newspaper, The Aggie tells the stories of the university as it happens. It opens up the ability to see […] the stories of the former Aggie journalists.”

The UC Davis Library is trying to push engagement to undergraduate students, according to Miller.

“Most students won’t make the effort on a term paper to the library and figure out how to work the microfilm or request the print copy from 1982,” Miller said. “It really opens up The Aggie to historical research that it hadn’t before, so I think it’s going to make a huge difference.”

Dresser explained how the digitization of The Aggie will also enable former journalists and staff members to see their long-ago published work online, as well as see how Davis has changed over the past century.

“Having the history of Davis chronicled by the students who lived the events themselves is really interesting and insightful, and bringing these Aggie archives online allows researchers, students (both current and former) and anyone else interested to gain this unique insight into life in Davis across the last century,” Dresser said. “I also wanted former Aggie staffers to be able to find stories they wrote or photos they took 30 or 40 years ago and have the opportunity to show their families and friends what they had spent countless hours working on in college. I think this archive will be a great way to engage with alumni of both the school and The Aggie itself.”

Managing Editor Hannah Holzer also assisted with the reporting of this story.