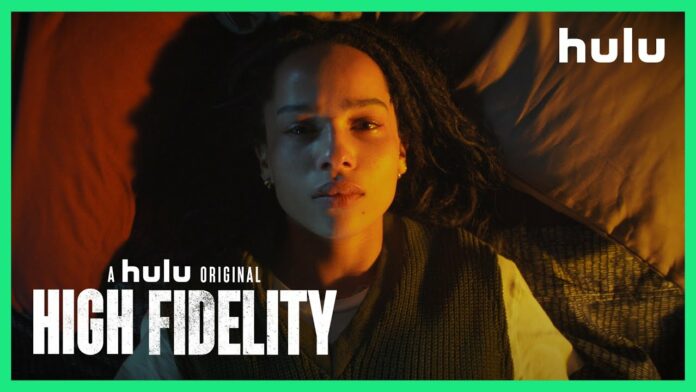 A review of series’ ability to touch its audience

The daughter of musician Lenny Kravitz and actor Lisa Bonet, Zöe Kravitz was born for her role in Hulu’s original series, “High Fidelity” — a remake of Nick Hornby’s 1995 novel. The ten-episode series, centered in a gentrified Brooklyn, is a play on the traditional heartbreak romantic comedy. The series first streamed on Feb. 14, as a little Valentine’s day revival for all the lonely hearts out there.

Rob, the protagonist played by Kravitz, hunts down her heartbreakers on what she calls her top five heartbreak list — trying to figure out why she seems to be a ticking time bomb for love. Sound familiar?

“High Fidelity” is a must-see for music junkies with an old soul. A musically-centered series, it emphasizes the late ‘80s, early ‘90s twang on modern pop-culture. The series takes millennials back to the time of obsolete delicacies: record players, mix tapes and an effort to quit smoking cigarettes.

After watching the series in a matter of two days (oops!), I gained a slight unhealthy obsession — which goes to show the effortless flow of the show itself. I got lost in Rob’s sob story of constant rejection and loneliness, yet she shows endurance as an independent woman.

As someone who has endured a broken heart on more than one occasion, I can vouch that the series understands pain and speaks to the soul. I even began comparing myself to Rob’s character, mannerisms and experiences as I listened to classic oldies like Jimi Hendrix.

Kravitz’s delivered as a relaxed, yet resilient woman who has a wound that keeps opening. Whether it be through heartbreak or in some other manner, everyone has pain they hold on to that seems to cling on like a shadow.

As for Rob, her shadow is her ex, Mac — No. 5 on her top five heartbreak list and her ex-fiancé. As to not spoil the series, Rob struggles with her former lover moving on with another woman, and another ring. Lilly, Mac’s new lover, tries to befriend Rob in an effort to lighten the already uncomfortable relationship of ex-lovers.

Everyone has a Lilly they cannot seem to shake — something (or someone) that brings piercing pain every time it crosses the mind. Rob endures that shadow every day, but learns how to live with that constant reminder of heartbreak alongside her two best friends and co-workers, Simon and Cherise.

Simon, Rob’s No. 3 on her top five heartbreak list, openly came out as gay while he and Rob were together. Simon’s sexuality is no secret, nor is Rob’s. She recalls her heartbreak No. 2 as Kat Monroe, a feisty social media influencer who left Rob for another woman.

As a quiet and a bit socially awkward character, Simon seems to only break out the comfortability of his shell when music is involved. As a musical genius, Simon is Rob’s right-hand-man when it comes to making her next playlist or needing a friend to lean on.

Simon gets his own spotlight, however, when he partakes in a stand-alone episode explaining his own top five heartbreak list. Here, the audience is able to understand Simon not only as Rob’s best friend, but as an individual.

Simon’s episode reveals that Rob is not the only person in the world who experiences pain, broadening the umbrella of experiences of heartbreak to a more diverse audience. As a gay character, Simon shares his own heartbreak — giving him autonomy as a supporting character.

As for Cherise, while she does not get the opportunity to explain her own top five heartbreak list through a stand-alone episode, it’s evident that her true love is her music. Constantly being rejected as an aspiring musical artist, Cherise’s goal is to be recognized as something more than a working black woman.

Everyone can relate to Cherise in terms of wanting to be seen as something more than what is outwardly presented. She embodies resilience, working up to her life’s goal despite being bogged down along the way. In the last episode, Cherise is heard as a musical artist for the first time in the series, as the sound of her new guitar and the soft of her voice echoes in the background.

Evident throughout the series, the producers of “High Fidelity” incorporate minorities as main foci in more ways than one. With Simon as an openly gay character and Rob as a queer, black, female owner of the record store (Championship Vinyl), the series embodies social activism.

Commending the producers for diversifying the series, I believe they did a decent job making these prevalent issues come naturally without playing the social justice card obnoxiously forward. Admittingly, it is hard to find that balance on such sensitive topics, the series gets a round of applause for its credibility and ability to address these matters.

All in all, the show does a marvellous job of reaching a wide audience. Many of the pain that the characters endure can come in many forms that can relate to almost everyone. I certainly found peace in knowing that I am not the only one in a rut. And if Rob can get through it with music, I (and everyone else) can find my music too.