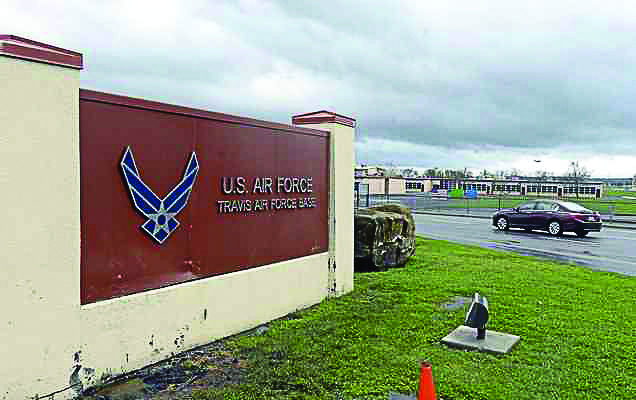 Solano County declared a local state of emergency on Feb. 27 in order to monitor and investigate cases of county residents who have contracted COVID-19, also known as coronavirus, as dozens of individuals were cleared and released from the county’s quarantine site at Travis Air Force Base (AFB) in Fairfield, California.

At the time of writing, three individuals that have tested positive for COVID-19 have been identified as Solano County residents, according to the Solano Public Health Department. The first of these three cases garnered national attention as the first-known community transmission in the U.S. — in other words, the first COVID-19 case with no recent travel or apparent contact with known coronavirus patients, according to Jayleen Richards, the Solano Public Health Services Administrator.

The patient in question was first treated in VacaValley Medical Center before being transferred to UC Davis Medical Center in Sacramento, where they remain at the time of writing, according to Richards.

The second confirmed case among Solano residents was a passenger on the Diamond Princess, a cruise ship that was placed under quarantine in Japan after traveling to Wuhan in China, where the virus originated, according to the CDC and the Solano Health Department. Roughly 400 of the Americans onboard were repatriated back to the U.S. and transferred either to Travis AFB or Joint Base San Antonio-Lackland in Texas to remain under a 14-day quarantine, the CDC announced on Feb. 14.

The majority of quarantined Diamond Princess passengers at both California sites have been released after medical clearance by health officials, NPR reported. A handful of passengers remain quarantined at the Travis AFB site, Richards said.

“Nearly all of them were released [March 3] from the 14-day quarantine,” Richards said. “The ones have tested positive and did get ill and those who were asymptomatic but have to get two negative lab results back [remain quarantined].”

Another Solano County resident from the cruise ship has tested positive for COVID-19 by Japanese officials. Confirmation by the CDC is pending, according to the Solano Public Health Department. Both of these Solano residents remain in mandatory home-isolation and are monitored by local officials, the health department said.

Despite their physical proximity, the initial community-transmission case in Solano hasn’t been connected to the quarantine at Travis AFB, said State Public Health Officer Dr. Sonia Angell in a press conference on Feb. 27 alongside Gov. Gavin Newsom.

“We have no evidence that there’s any connection with those patients in this individual at this time,” Angell said.

The third confirmed case of COVID-19 in Solano was announced on March 1 through a press release from the county health department. Two healthcare workers at VacaValley Medical Center — one a resident of Solano and the other from Alameda County — were identified as “presumptive positive” for the disease by the health department. These two cases have been connected to the initial, community-acquired case in Solano, according to Richards.

“That person was a NorthBay VacaValley employee exposed to the person who was the first community transfer,” Richards said.

According to the health department’s press release, both healthcare workers are currently in isolation in their respective homes. Meanwhile, local, state and federal officials are closely monitoring both of their contacts, as well as other healthcare workers who may have had contact with the community-transfer patient, the press release read.

“Public health and hospital staff rapidly identified all health care workers in contact with the case during the case’s hospitalization,” the release read. “All of those health care workers remain in isolation or in quarantine and will not return to patient care until they are cleared. Additional COVID-19 cases among them may occur.”

Solano County declared a local emergency on Feb. 27 as a “formalizing” move to bolster the response from local, state and federal agencies, as well as an attempt to obtain additional financial support for their efforts, Richards explained.

“You can imagine […] the amount of investigation that we need to do right now,” Richards said. “The amount of testing, investigation, and then giving people isolation and quarantine instructions — right now, the California Department of Public Health and the Center for Disease Control are both here helping us with that level of work. So that’s why we had to declare an emergency for our county.”

The state of emergency doesn’t have any immediate effect on most Solano residents’ day-to-day lives, Richards said, but the county will likely issue advisories in the near future for senior populations — a demographic at higher risk of severe illness and death from COVID-19, according to the CDC.

“We’re working on efforts to work with our older adult population,” Richards said. “We’ll probably send out messages later this week advising [older] people not to congregate in areas together.”