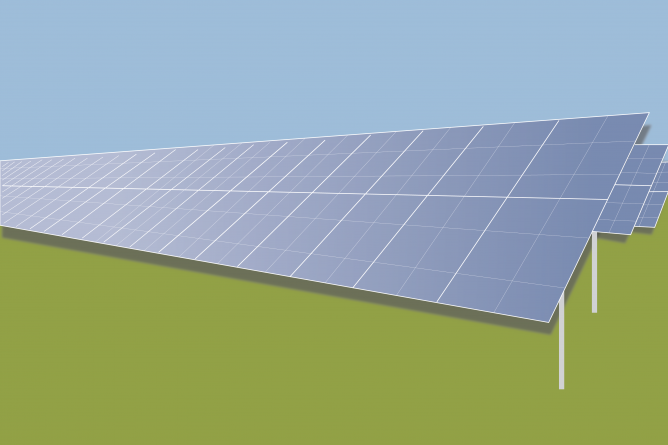 The agreement with Aquamarine Westside, LLC will help Valley Clean Energy reach its goal of 75% renewable energy by 2020

Valley Clean Energy, the local electricity provider for Davis, entered a 15-year contract with a solar park in Kings County to provide more renewable energy to Yolo County. Once commercial operation begins in late 2021, the solar project will supply 50 megawatts of renewable energy to Davis, Woodland and unincorporated areas of Yolo County.

This contract marks a significant change in the way the relatively new electricity provider has purchased energy. Valley Clean Energy, founded in 2018, had only entered into short-term energy contracts which can range from a few years to seasonal purchases. Gordon Samuel, the assistant general manager of Valley Clean Energy and director of Power Resources, explained the financial benefits of a long-term contract.

“This is going to help us in that we will be procuring competitively priced long-term clean energy,” Samuel said. “The nice thing about it is that it’s all from renewables and it’s stably priced, so we’re not going up and down as the market fluctuates.”

When completed, the Aquamarine solar project will be a part of Westlands Solar Park in Kings County, which is led by the real estate investment firm, CIM Group, LLC. In a press release published by CIM, the company explains that the contract between Valley Clean Energy and Aquamarine Westside, LLC will be the start of the construction of the solar park.

“The first phase of CIM’s development at Westlands Solar Park includes Aquamarine, a 250-megawatt solar photovoltaic project, which has obtained all entitlement and conditional use approvals following a full environmental impact review,” the press release read.

“[Westlands Solar Park is] one of the largest permitted solar parks in the world that could grow to more than 2,700 megawatts (2.7 gigawatts) of renewable energy potential at full buildout, which could provide clean energy to more than 1,200,000 homes,” the press release read.

“It checked a lot of the other environmental boxes as well,” Samuel said. “It does not have any impact on environmentally protected species. The land use is not prime agricultural land, so it had additional benefits that we put value on.”

Jim Parks, the director of customer care and marketing for Valley Clean Energy, explained that the site of Westlands Solar Park used to be farmland but no longer has optimal farming conditions.

“In this particular property, there was some salt intrusion that made the land a poor choice for agriculture and actually a good choice for solar panels,” Parks said. “You’ve got some land that is damaged in some way, and you can put solar panels on there and get some great benefits out of it.”

Once the project enters commercial operation, it will begin a shift toward solar power for Valley Clean Energy, which sourced 48% of its energy from wind renewables and 37% from large hydropower in 2018. Though a valuable renewable resource, solar energy has challenges of its own.

Parks described how large-scale battery storage can help in the daily challenge of solar energy: when the sun sets.

“There’s a big peak when solar begins to shut-off,” Parks said. “Suddenly, everyone’s turning on their air conditioning and increasing their electrical loads and then there’s no more solar generation. Those are the times when you want the storage to kick in to reduce that need.”

Besides the positive environmental impacts, this contract will lead to economic effects, as the Westlands Solar Park will, “contribute to economic development in Central Valley communities by diversifying the region beyond agriculture and create a substantial number of clean energy jobs,” according to the CIM press release. Parks says this economic growth is initiated through these contracts.

“It’s contracts like ours that facilitate construction of plants like this,” Parks said. “They get the contract, they go, ‘Okay, we need to produce this energy by this amount of time,’ and it gets the construction process going.”