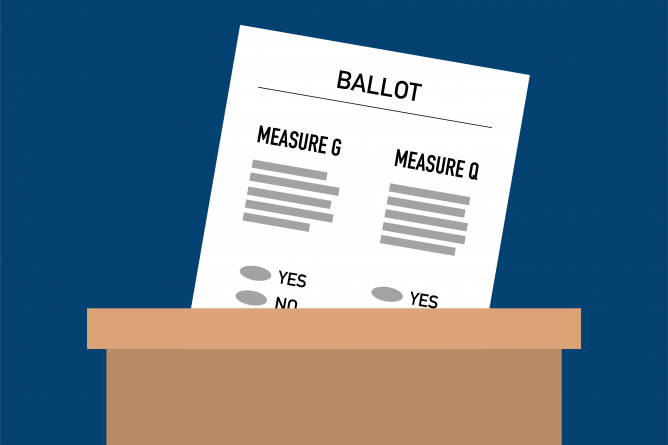 Some Davis school community members are still hopeful for Measure G to pass, as more ballots are expected to be counted from the California primary. The measure is currently approved by 65.06% of Davis voters, less than two points away from the two-thirds majority needed for the measure to pass.

According to the Yolo County Elections Office website, 12,717 votes have been cast for Measure G, and 8,274 of those votes approved the measure. At the time of this writing, thousands of votes remain to be counted which could affect the final results of Measure G. When the unofficial results for election night were released, the Yolo County Elections Office commented on the discrepancy between what is currently posted and what the actual results may potentially be.

The Yolo County Elections Office posted an update two days after the results were released, describing the numbers in detail. In total, 24,869 ballots still need to be counted, 18,336 of which are vote-by-mail ballots.

Many voters for Measure G remain hopeful that these ballots will put them over the two-thirds threshold. During the Davis Joint Unified School District Board of Education’s meeting on March 5, school board members discussed the campaign and their hopes for the results. Victor Lagunes, the president of the Davis Teachers Association, described the actions taken by community members to campaign for this measure.

“Some of our efforts were that we reached over 10,000 homes with fliers and information,” Lagunes said. “We wrote an enormous number of letters to the editor, postcards that were hand-signed and delivered — lawn signs popped up everywhere.”

He added that he is hopeful that the measure will pass.

“We were able to penetrate the noise of misinformation, and we are still in the running,” Lagunes said. “While there is uncertainty, I’m looking forward to seeing a comeback that, in a word, would be epic.”

Sandra Royval, the president of the Davis chapter of the California School Employees Association, shared a similar sentiment of gratitude and hopefulness.

“We’re still very hopeful — everyone’s keeping their heads held high,” Royval said. “It was this huge effort to try and make things right by our teachers.”

Trustee Joe DiNunzio commented on the cooperation of community members to campaign for Measure G.

“I’ve been involved in a lot of partial tax campaigns over the last 18 years that have been here in Davis,” DiNunzio said. “I can honestly say that this was the most compelling campaign that I’ve seen. It was a true integration of teachers, staff, parents and community members — all of whom shared a vision for what they wanted to see happen in our district.”

If passed, Measure G would levy a parcel tax of $198 a year for Davis residents to encourage competitive salaries for retaining teachers within Davis public schools. In total, this would raise $3 million a year in additional funding for the school district.

School leaders claim that the bill will reduce the discrepancies in salaries between Davis teachers and teachers from other districts, in an argument posted on the Yolo County Elections Office website in favor of the measure.

“Currently, Davis teachers and staff are paid less on average than those in other schools in our region,” the argument reads. “Measure G fixes this systemic problem and ensures high quality public education into the future.”

But those who oppose the measure claim that it will raise taxes for schools in Davis to an unreasonable level.

The passage of other measures on the ballot seems more certain. For instance, Measure Q, which suggests a continuation of the 1% sales tax until repealed by voters, passed with 80.27% of voters on the measure voting yes. Nevertheless, it will take a few more days for the final results of the California Presidential Primary election to be posted.