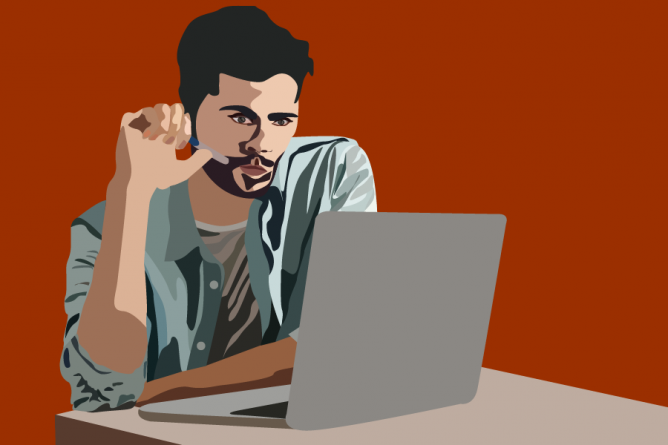 Moving out of the dorms, proctored or canceled finals, and more: How the evolving COVID-19 pandemic played a role in many students’ finals week anxieties

Quarter-system students face an additional source of stress amid the evolving coronavirus pandemic: Dealing with the fallout that was Winter Quarter finals. COVID-19 puts universities across the nation into uncharted territory, leaving many students and faculty alike with no cohesive plan for fulfilling coursework and taking exams.

This unique situation led to myriad finals week experiences. While some professors elected to cancel exams completely, others converted them to take-home exams and some navigated ProctorU for the first time. Many courses even had to change exam plans multiple times, given that the university announced that finals would be moved completely online only five days before finals officially began — leaving many professors and students scrambling.

Farah Shuaib, a first-year psychology major, recounts how the dorms were buzzing with worried chatter surrounding how certain classes were going to adjust their exams.

“Just sitting and waiting was so stressful for people, because obviously you want to know if you should start studying hard for [an exam] or not,” Shuaib said. “For chemistry, I was just sitting, I was not doing anything to prepare because I had no idea what the final was going to be. I think everyone was excited at first for online exams, […] but the next day, when they realized that now the teachers had to come up with something, it got a lot scarier.”

Shuaib did not receive updated information about the status of one of her exams until March 13, just three days before finals week began. Additionally, Shuaib, like many students, had to learn how to use ProctorU, which she said was stressful at first.

“It’s a little unnerving with the camera, because although you can’t see them, you get the idea that someone is watching you and hearing you, and it’s a little uncomfortable,” Shuaib said. “It was really nerve-wracking hearing someone talk on your computer and have control of your cursor even.”

Taking exams on ProctorU required students to learn how to use new software on their own time. These exams require an empty room, reliable internet connection and a strict time frame, which can be difficult to coordinate, especially when sharing living spaces with roommates or family.

Additionally, many freshmen, including Shuaib, were faced with deciding whether to move out of the dorms or not for the duration of Spring Quarter. Residence hall students received an email March 17, mid-finals week, that they had until March 25 to decide whether or not they were going to remain in the dorms for the rest of the academic year. If they elected to move home, they were required to have all of their personal belongings out of the room by March 25. Shuaib says that deciding whether or not to stay on campus added stress to her finals week.

“It was on my mind for like a week, wondering what’s best,” Shuaib said. “Being home or being somewhere where I can pay attention?”

Similarly, Kathryn Nguyen, a first-year animal science major, was planning to leave campus for just over a week when she found out that the following day she would need to have all of her belongings packed up to take home. When she learned that she would need to be ready to move out in 24 hours, she still had two exams to take, which added to the stress of the week in her opinion.

“While I was stressed out about [moving out] and worrying about my family as well, I had to take my CHE 2B final on Monday at 8 a.m.,” Nguyen said. “It was extremely stressful, and the system even submitted my exam [before it was complete] due to technical errors. I emailed the TA about it, but the only thing that they could let me do was opt out of the final or take an incomplete. I ended up opting out, […] but this was an extremely upsetting experience.”

Nguyen struggled to complete her exam and pack up her belongings in such a short span of time and recalled how the uncertainty over her grade made it more difficult to focus on packing and study for her exam the following day. She ultimately had to take her ANS 2 exam on her way home from school since she was unable to leave as early as planned, having not finished packing up her room. Nguyen said this made it very stressful for her to complete the exam.

“I had to drive down to SoCal, and I did not know if I would be able to make my ANS 2 final exam online,” Nguyen said. “I took it while we were driving using my mobile hotspot. The internet went out a couple times, and it was the most stressed I had ever been in my life.”

While some courses had stricter exam policies, other courses opted for take-home or cancelled exams in light of the unforeseen circumstances. Rachel Callegari, a first-year political science major, said she only had to take two of her four originally scheduled exams.

“My political theory final was changed so the professor gave everyone 100% on the test,” Callegari said. “My stats final wasn’t canceled, but he made it optional to take. He said that he would weigh our first two midterms more heavily if you didn’t take the final, and I was happy with my grade on those midterms so I opted not to take the final.”

Of her two remaining exams, both were adjusted, allowing unproctored Canvas assignments to fulfill the final exam requirement. Callegari said that because of her professors’ flexibility, she was actually able to perform well on her exams.

The stress of the evolving situation, both globally and on-campus, however, did affect many students’ performance on exams, like Shuaib. She and many students said they were more stressed than usual during finals week, saying the uncertainty of their exams and the rest of the school year affected their ability to prepare for exams.

“When I heard the news — this may be a little selfish — but I got really sad, because first of all, it’s a pandemic and that’s scary on it’s own, but I was also thinking about Spring Quarter,” Shuaib said. “Getting the news that Spring Quarter was going to be an empty campus was a little devastating, and that kind of ruined my syke for finals week.”