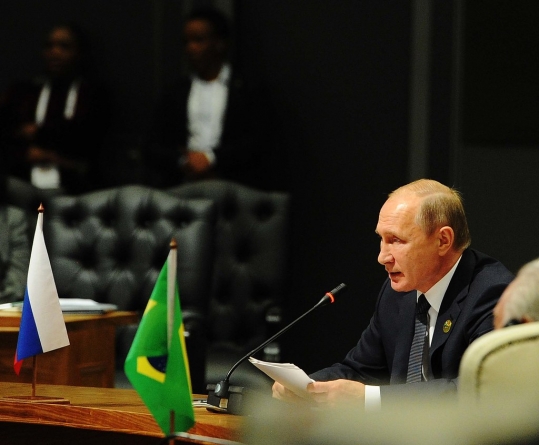 Despite its homophobic laws, Russia embraces gay culture in the entertainment world

While growing up watching Izmailovsky Park — Russia’s version of SNL — with my family, there was always a skit featuring two straight men, clad in the “babushka” attire of kerchiefs and dresses. They weren’t necessarily drag queens, but the duo comedy act relied on mimicking the mannerisms and outfits of Russian grandmas to hit their punchlines.

Even when I go back home over break, the babushkas still perform on TV 15 years later, in the same gender-bending ensemble.

While homophobia is unfortunately rampant in many countries, Russia’s government is particularly frank about its anti-gay stances. They hold a strict “gay propaganda law,” dubbed as a “child protection law,” which fines or jails individuals for presenting homosexuality as a norm in society.

The Russian showing of the 2019 “Rocketman,” Elton John’s biopic, cut all gay sex scenes to comply with these laws. A Russian imam even discouraged fans from attending John’s concert back in 2013, calling it a “hotbed of sodomy.”

More severely, several LGBTQ members are detained and subjected to physical violence, due to “gay purges” in the region of Chechnya. Even with tolerant cities such as Moscow and St. Petersburg, homophobia still dominates the streets and political spaces.

Despite this, pop culture in Russia is noticeably flamboyant, or in other words, “gay.”

Philip Kirkorov, one of Russia’s biggest pop stars, regularly sports makeup and a diva personality on stage. Though he is not openly gay, his brief marriage to Russian Madonna, Alla Pugacheva, was evidently more of a business than romantic relationship.

“It served the additional function of providing cover for him — the appearance of normalcy,” said Dana Heller, a professor at Old Dominion University, in an Atlantic article. “The illusion means that Russians don’t have to worry about reconciling their appreciation for these performers with the culture’s homophobia because there is no contradiction for them, so long as LGBT performers keep their orientation to themselves.”

Kirkorov isn’t the only gay, although not openly gay, Russian pop star. Boris Moiseev, an openly gay star, is celebrated on Russian stages, despite his campy performances. However, comments with homophobic slurs flood his YouTube videos.

In the early 2000s, Russian music duo Tatu achieved international success. The group consisted of Lena Katina and Julia Volkova — two straight women made out to be lesbian lovers by their manager. The music video for their song “All The Things She Said” shows them kissing in the rain dressed in schoolgirl uniforms at the age of 14.

Though their public persona was more geared towards the male fetishization of lesbians, it brought the LGBTQ image to the forefront of Russian pop culture. Their music drafted a narrative of teenage lesbians expressing their love for one another in a forbidding, homophobic society.

Although Katina and Volkova are vocal about their support for LGBTQ rights, Volkova draws a line with gay men, insisting that “a man should remain a man,” whereas “lesbians look aesthetically nicer.”

Volkova’s hypocrisy aligns with Russia’s contradictory views towards performers and other professionals. In 2013, political journalist Anton Krasovsky was fired immediately after coming out on TV.

“I am as human as President Putin and Prime Minister Medvedev,” he said during the live broadcast.

“The success of all those campy singers probably says that Russian society is not as homophobic as Putin believes it is,” said journalist Artemy Troitsky.

But as homophobic sentiments grow with stricter laws, flamboyant performers may begin to lose their place on Russian stages. A popular Ukrainian drag queen, Verka Serduchka, reportedly lost a singing contract with a Russian variety show because the producers feared that he may be promoting “non-traditional relationships.”

Although 83% of Russians find homosexuality “reprehensible,” a small population still supports LGBTQ rights. Even with President Vladmir Putin’s extended administration, there may come a day when gay people in Russia will no longer have to hide behind stage personas.