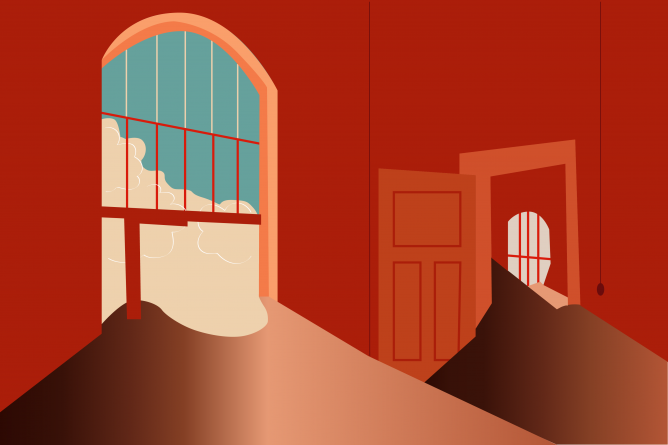 After a tormenting five-year hiatus, Tame Impala — the Australian one-man write it, play it, mix it machine, Kevin Parker — released his fourth studio album on Feb. 14. “The Slow Rush” follows in the imposing shadow of the 2015 critically acclaimed and widely praised “Currents,” album, whose unmistakable groovy basslines are still featured on radio stations everywhere. Given the artistic and commercial success of  “Currents,” “The Slow Rush” is arguably the most hyped release of the year. Since the inception of Parker’s project in 2007, it has steadily pumped out some of the best alt-rock of the past decade. Accustomed to consistency, I first listened with expectations of only the best and finished listening with a tinge of disappointment.

Fittingly titled, “The Slow Rush” confronts the passage of time. Parker described the album to Boston’s NPR station — “Life is like a piece of string with a definitive start and end,” he said. “And we never really know where we are on that piece of string.”

When I listened to the songs, Parker’s remark makes sense, although not in the way he intended. On first listen, I found myself bouncing around from track to track, drifting through no man’s land. In the sixth track, “Tomorrow’s Dust,” Parker explores time through the past’s stranglehold on the future, highlighted by the lyrics, “And though I try, I do the same as though I must // And in the air of today is tomorrow’s dust.”

Parker’s inner monologue dominates the hour-long album, as he meditates on his creative capabilities and potential artistic legacy. In the song “On Track,” Parker comes across as tentatively confident, repeating a mantra to convince himself that he is where he’s supposed to be, and despite the many, “tragedies falling in [his] lap [and] major setbacks” he is still “strictly speaking on track.”

Tame Impala’s last three projects gracefully toed the line between nostalgic psych-rock and cutting-edge production technicality. Shifting into the realm of lo-fi dance music, “The Slow Rush” is of an entirely different vein. When compared to the lucid audiovisual wonderlands of “Innerspeaker” and “Lonerism,” songs like “Glimmer” and “Instant Destiny” come across as airy and stale and could be removed without harming the structure and flow of the album. The lead track “One More Year” — an amalgamation of an auto-tuned droning “ohms,” heavy reverb and a basic looped bassline — is another cut that seems just a touch out of place. Parker’s normally dreamlike tone is bogged down and oddly macabre, pushing me into a state akin to my own attempts at meditation — inescapable boredom.

This isn’t to say the album is completely flawed. The heart of the album’s redemption lies in “Posthumous Forgiveness” — a dazzling epic recounting Parker’s tumultuous relationship with his late father. Filled with a colorful variation in pace and instrumentals, the track leaves you floored for its six-minute duration and marks a sharp turn from the arid sounds that precede it. The composition blends twangy guitar, spacey synths and a pounding bassline. Wearing his heart on his sleeve he sings, “Just a boy and a father // What I’d give for another // Wanna play you all my songs // Hear your voice sing along.”

His intonations are packed with the emotional strain of losing a parent. At the four and a half minute mark, his voice shifts up an octave and the song cascades into a heavenly ethereal falsetto, putting it among my all-time favorites from the band.

Followed by the promise of “Breathe Deeper,” it fades to disappointment, and the album cools down as fast as it heated up. For whatever reason, as much as I tried, I just couldn’t get around to enjoying the heady dance tunes that make up the majority of the work. Regardless, giving credit where credit is due, there is a splash of quality on the album that almost every fan can enjoy. Cuts that stood out in my eyes, in addition to “Posthumous Forgiveness,” were the polished upbeat second version of “Borderline” and the head-bobbing drum-packed “Might Be Time.”

Parker said he hoped this album would prove that the idea of genres is a thing of the past, and it’s true this album isn’t in a box. However, it doesn’t quite fit in anywhere — dull on the dancefloor and limited content-wise for full-length listening. After all the suspense, the album did not live up to expectations, but maybe that’s okay — indicative of growing pains in an otherwise promising career.