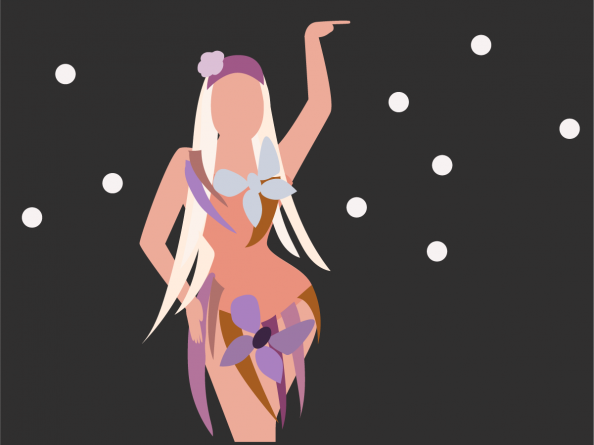 A look into the TikTok generation’s fastest rising star

Nothing has rocked the music industry like the introduction of TikTok, and no artist has benefited from the app more than Doja Cat. “Candy,” “Cyber Sex” and “Say So” are just some of the 24-year-old singer and rapper’s multiple songs that have gone viral on the videosharing platform. Now, she is the queen of one of the biggest apps on the market, but who was she before we knew her as the sexually liberated genre-bending artist she is today?

Born Amalaratna Zandile Dilamini, she was raised in the suburbs of Los Angeles. Not much is known about her family, but it’s suspected that her father is a South African actor while her mother is a Jewish art teacher. Elated to learn of her Jewish heritage, I scoured the internet trying to find confirmation from Doja herself, and ultimately failed. In the name of journalistic integrity, I spammed all of her Instagram live videos with “are u jewish” until I got blocked from commenting for three days. Weeks went by without a response. I began to lose hope — until her 11 p.m. live stream on March 11. After the second comment I sent, she stared at the camera and provided us Jewish Doja Cat fans with the confirmation we craved: “Am I Jewish? Yes.”

She dropped out of high school to upload her self-produced Garageband songs on Soundcloud. This is where she released her 2013 song “So High.” Later, it became her debut single when she signed to RCA Records. With the release of her debut EP “Purrr!,” she released two of her more popular songs, “Go to Town” and “Tia Tamera,” the latter a collaboration with fellow up-and-coming artist Rico Nasty.

Her first album “Amala” gained mild success, but it wasn’t until five months after its release that it gained widespread acclaim with the release of the music video for “Mooo.” The homemade video shows scenes of Doja in a cow-printed two piece, lazily dancing in front of a green screen that alternates between GIFs of bouncing anime breasts and pixelated flipping burgers. The fun, laid back video paired with the creative lyrics: “B-tch, I’m a cow, b-tch, I’m a cow (Moo, moo, moo) /Got the methane, I’m a farter (Woo) With my farmer (Woo), MacDonald (Woo).” It took the world by storm. In August of 2018, “Mooo” made its way into our playlists and patterns of speech. Propelled by the “Mooo” fame, Doja Cat released a deluxe version of “Amala” with three bonus tracks. One of those bonus tracks, “Juicy,” marked her first entry on the Billboard charts, debuting at no. 41.

Doja quickly became familiar with the darker side of fame. Old tweets resurfaced and she was documented saying multiple homphobic slurs. When confronted, she uploaded one of the worst celebrity apologies to date. The tweet featured her announcing she “has said F****t roughly like 15,000 times” in her life while simultaneously displaying her accepting attitude stating: “Do I hate gay people? I don’t think I hate gay people. Gay is okay.”

There was a moment of outrage: Articles were published and tweets declared her canceled. But the anger came mostly from straight people. Members of the LGBTQIA community did not take as much offense. Many made it into a joke and continued to support her undeniably good music. The controversy blew over, but the joke remains.

After “Amala,” she released “Hot Pink.” Similar to her previous album, it had a slow start. It changed when TikTok user Haley Sharpe uploaded a dance cover. The dance took off, and it wasn’t long before its signature punch and body roll would be recognizable to any TikTok user. People heard the song in the background and started streaming and sharing it. It spawned multiple mashups, many with different verses from rapper Nicki Minaj — the most popular being an incredible pop mix of the background of “Say So” with the lyrics of Ariana Grande’s “goodnight n go.” “Say So” continues to climb the charts, peaking at no. 16 on the Billboard Hot 100, at the time this article was written.

Though Doja Cat is receiving unprecedented levels, she’s not immune to the controversy that seems to follow her on every step of her career. She has most recently received backlash for working with Dr. Luke, the infamous producer, on “Hot Pink.”

Whether you chose to focus on her faults, or ignore them to enjoy her skillful body of work, Doja Cat is currently the most powerful artist on the rise.