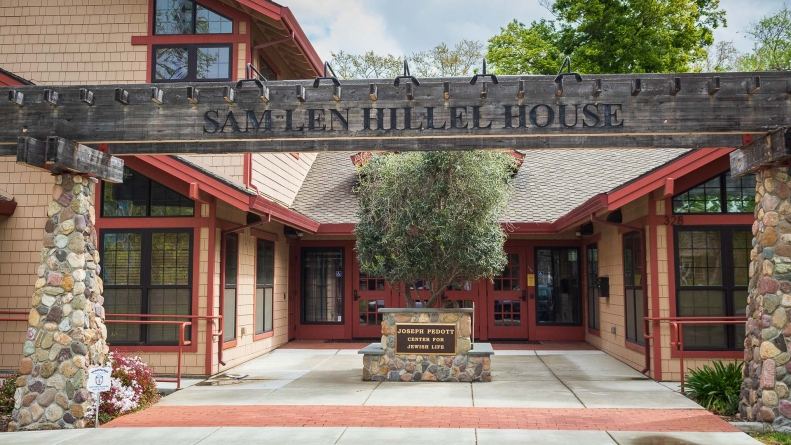 For many students, the Hillel of Davis and Sacramento serves as a home away from home. Students frequent Hillel, located directly across the street from campus on A Street, to attend Shabbat dinners on Friday nights, free Tuesday lunches or just to study in between classes.

Korman was drawn to the internship because of its integration with the Jewish community.

“Hillel always seemed like an important place, because it’s a place where Jewish students can gather and feel at home.” Korman said. “It felt like a good opportunity to work at a place like that, where I’m serving the Jewish community.”

The interns juggle many tasks. One big part of their job is helping to plan and execute the weekly Shabbat dinners that Hillel hosts. Each Shabbat has a different theme with its own menu and ambiance, such as Chanukah or Disney Shabbat. In addition to the planning, the interns help set up and clean up every Shabbat.

The interns have a role in shaping the events and their themes. For example, Pasturel helped create New York Deli Shabbat, inspired by his grandfather who grew up in the Bronx. Former Soviet Union Shabbat was inspired by Vainberg, Bahkter and Korman’s family origins from the former Soviet Union, serving to shine a light on the discrimination toward the Jewish people that took place there.

The interns are also involved in planning less routine events, such as events for Jewish holidays or events that host influential speakers. Hillel hosts joint events by working with organizations such as the student group Aggies for Israel while also hosting many of their own events, like LGBTQ movie nights.

Another part of the internship is student outreach. Interns are encouraged to take students out for coffee dates to check in on them and receive feedback on what they want at Hillel. The goal of this engagement is to show the Jewish community on campus that Hillel is there for them.

“As an intern, you get a more direct say into the direction that you want to take Hillel, whether it’s with the programming, the social media — anything,” Browner said. “They get the opportunity to be campus leaders, they get the opportunity to make changes that they want to see at Hillel. Ultimately, Hillel is there to serve them, so that’s what we want to do, is to enhance their own college experience as much as possible.”

With Spring Quarter operating remotely due to health concerns over the ongoing coronavirus pandemic, Hillel is closed until April 7, 2020. The interns said Hillel is working on plans with Hillel International to continue on in an online platform in order to maintain connections with and continue to provide services for the students.

Pasturel said working at Hillel was a valuable experience because it acted as an opportunity to serve the Jewish community, build relationships and positively impact others.