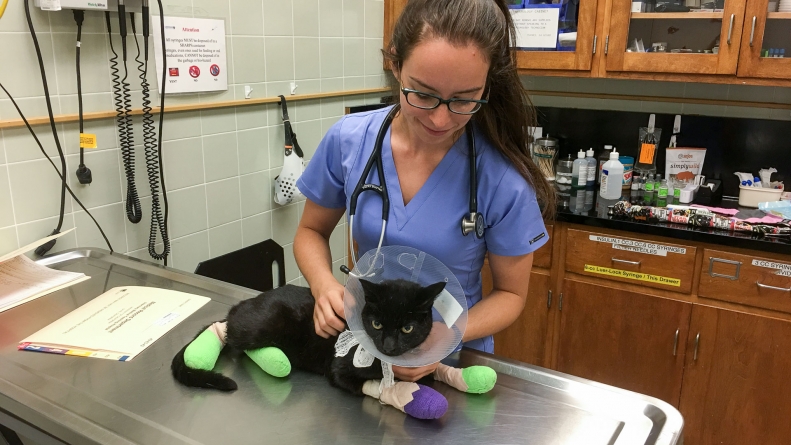 After studying the effects of burns and smoke inhalation on domestic house cats in recent California wildfires, researchers from the UC Davis Veterinary Medical Teaching Hospital (VMTH) found the cats also had a higher incidence of cardiovascular issues. This study, which was published on Feb. 14 in Scientific Reports, marks VMTH’s first endeavor into research on feline wildfire victims in California.

The 51 cats included in the study were already at VMTH for treatment from both the 2017 Tubbs fire in Santa Rosa and the 2018 Camp Fire in Paradise. After performing echocardiograms, or heart ultrasounds, researchers found the fires had significant cardiovascular effects on these cats, including a much higher incidence of blood clot formation and heart muscle thickening.

In this study, researchers examined the cardiovascular health and activity of these cats when they first came to the hospital as a baseline and then again one to two weeks after they had been receiving care for comparison, said Catherine Gunther-Harrington, an assistant professor of clinical cardiology at the UC Davis School of Veterinary Medicine.

More than half of the cats studied had heart muscle thickening and almost 30% had blood clots or were at high risk of developing blood clots. When cats develop blood clots, they are also at a high risk of sudden death, Gunther-Harrington said.

“[These results] tell us a lot about what we can expect in future fire environments and changes the way that we practice in terms of caring for cats that are victims of fires,” said Joshua Stern, a professor of cardiology at the School of Veterinary Medicine.

Six of the cats died or were euthanized due to cardiac complications during the course of their care at VMTH. Eighty-two percent of the cats survived and were discharged to their owners.

“A few of the cats with very severe injuries unfortunately did not make it,” said Ashley Sharpe, a cardiology resident at VMTH. “These cats either died or were euthanized due to significant decline.”

A number of the cats studied had significant cardiac findings. One cat of particular importance had a very large blood clot on his aorta, a vessel that leads to the rest of the body. A blood clot in this region is dangerous and signifies that the clot is very close to being dislodged, Gunther-Harrington said.

“The good news for that cat is despite having that blood clot in a very dangerous place, after treatment with us, that got resolved,” Gunther-Harrington said. “He was able to be discharged from the hospital.”

If possible, in the event of a wildfire, cats should be evacuated along with humans. If cats end up suffering from smoke inhalation or burn injuries, it is important they get adequate veterinary care, just like how their human counterparts would seek medical attention, Stern said.

Cats were used as the subject of this study because they were already at VMTH receiving care. More cats are present in hospitals after wildfires in comparison to other animals because they are good at hiding or getting out of the way in an emergency, Gunther-Harrington said.

“When many owners are evacuating, they’re able to round up their dogs and get them in the car but oftentimes, especially outdoor cats are much harder to find in emergencies,” Gunther-Harrington said. “Those are the ones that often will have wounds or burn injuries.”

After being exposed to smoke from a wildfire, felines need drug treatment to prevent blood clot formation. Researchers found that the cats who started medication early on in treatment had the best health results, Stern said.

Ronald Li, an assistant professor of small animal emergency and critical care at the School of Veterinary Medicine, used the findings of Gunther-Harrington and her team in the initial study to continue research on the cardiovascular effects of wildfires. The results of this work were not included in the original study in Scientific Reports, but will be published in the near future.

Li studies the relationship between platelets, tiny blood cells that help the body stop bleeding, and blood clots in his lab.

“We believe these cells are more activated, or turned on, and they can lead to unnecessary blood clots,” Li said.

After comparing blood samples from the 51 cats suffering from burns and smoke inhalation to 30 normal cats, Li and his researchers found that the platelets from the cats exposed to wildfire had blood clots in their hearts and more reactive platelets compared to normal cats.

“Their platelets behave differently from normal cats and then we think that’s part of the reason why they form clots,” Li said.

When platelets are hyperreactive and “unnecessarily doing their job,” the effects can be detrimental, Li said. The clots forming inside the heart can break up into little pieces and travel to other parts of the body, like the brain, lower limbs or smaller arteries. Similar movements of clots are seen in cats with heart disease.

“I think this is the first time that we find that when they are exposed to smoke inhalation and wildfires they actually can do that too,” Li said.

To treat platelet overactivation, Li and his team are researching the expression of receptors on platelets that could be responsible for forming clots. Because aspirin works well for many cats to reduce platelet activity, the team used it as treatment for the cats in the hospital.

“Aspirin is a platelet inhibitor and we find that for whatever reason, aspirin stops those pathways and stops the platelets from overactivity,” Li said.

Gunther-Harrington said she hopes that by studying the effects of burns and smoke inhalation on feline health, other studies could research the best target therapies and treatment for those animals. Then, those treatments can be applied to other animals and humans.

“I think [the study’s results] tell us how many animals are affected by burn injury and by smoke inhalation injury [and] it sets the groundwork for us to understand exactly why this happened,” Gunther-Harrington said.

As with the results of the first study, Li believes that these findings about platelet activity could be applicable to people. To understand the connection, researchers use human models with mice and rats suffering from smoke inhalation and environmental pollution.

“But it also tells us a little bit about cats and how they may really model or mimic what happens to human patients that are either burn or smoke inhalation victims,” Stern said. “We’re hoping that as we continue to see cases and treat these cats that we learn more about the most effective treatments and maybe that can be applied to their human caretakers as well.”

Because each year wildfires are becoming more frequent in California, Gunther-Harrington said understanding health and treatment methods for fire-induced injuries is increasingly important.

“We know that there’s likely going to be many more fires and so likely we’ll have many more cats that will be affected,” Gunther-Harrington said. “So if we can learn something from these cats, we can often apply it to the care and treatment of the people who take care of them.”