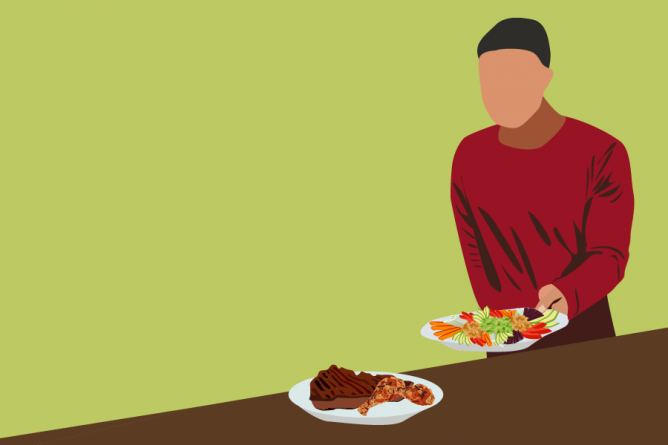 Reducing the risk for heart disease? Slowing the impacts of global warming? Reducing the number of animals killed for consumption? There are many reasons that motivate people to become vegetarian, but research illustrates that health and environmental reasons, as well as animal rights, are the most common influencers in Western cultures, said Psychology Professor Christopher Hopwood via email.

UC Davis researchers set out to discover the most compelling reason why non-vegetarians decide to change their diets and how these influences connect to personal characteristics.

Researchers in the Department of Psychology surveyed 8,000 people of various ages and ethnicities to determine their motivations for becoming vegetarian. These surveys were conducted in two languages, with two samples of UC Davis students, one online sample in the U.S. and a large representative sample in the Netherlands, Hopwood said. From conceptualization to publication, this study lasted about three years and was funded by the Animal Charity Evaluators.

“Part one of the study was to design a scale that measured these different reasons to become a vegetarian,” said Ted Schwaba, a doctorate student in psychology, via email.

Based on the surveys, researchers found that the main reason people stopped eating meat was health-related. Environmental aspects and animal rights were less common reasons for people becoming vegetarians; however, the people most committed to the vegetarian diet were most motivated by the environment or by animal rights.

“This presents a paradox for advocacy,” Hopwood said. “It is possible that health might be targeted to get a ‘foot in the door,’ but ultimately the best way to convince people to adopt a plant-based diet is to get them to see that it is the right thing to do to promote social justice and to curb climate change.”

The central focus of this study was to examine whether these three different reasons to become a vegetarian — health, environmental and animal rights — had unique associations with people’s personal characteristics, such as their personality, values or demographics.

“There was no validated measure of these three motives in particular that could be used to assess non-vegetarians,” Hopwood said. “We sought to develop such a measure, and to use it to generate profiles of people who tend to be motivated by these three different factors.”

Many different personal characteristics were associated with motives for vegetarianism, Hopwood said. The study found that, in general, people who are motivated to be on a plant-based diet are more communal and are driven by peace and sensitivity to others. People most motivated by health tend to be more traditional, conservative and masculine. People most influenced by animal rights and the environment are more open to experience and interested in the arts.

“People who valued responsibility, being happy, and national security, for example, would probably be best persuaded to eat vegetarian diets if we mentioned how they were more healthy,” Schwaba said. “Only people who had volunteered for environmental organizations really felt like an environmental motive would drive them to eat more vegetarian, and people who cared for animals themselves really felt like animal welfare would be a reason to eat vegetarian.”

By understanding these unique associations, advocacy groups can better tailor their messages to people and target their campaigns to help convince others about the benefits of the vegetarian diet, Schwaba said.

To study the motivations, researchers validated a measure with scales, called the Vegetarian Motives Inventory, to study health, animal rights and environmental motives for a plant-based diet. Schwaba helped design and carry out the statistical analyses to study these motivations.

By using R, a data analysis program, Schwaba and other researchers used statistical analysis methods to remove measurement error and to make sure the findings were real in the data. The researchers also had the different motives for becoming vegetarian “compete” against each other to find the strongest predictor, Schwaba said.

“For example, we found that UCD students who are more agreeable and friendly were especially motivated by health reasons to eat plant based diets, but we needed to examine if that was also true for our more diverse online sample and our sample of Dutch people,” Schwaba said.

Daniel Rosenfeld, a psychology doctorate student at UCLA, said studying the psychology of vegetarianism is fascinating on a theoretical level.

“Vegetarianism is related to all kinds of things like gender, morality, culture, race, stigma, social relationships, and much more,” Rosenfeld said via email. “There’s an endless stream of questions that psychologists can ask in this field, which can provide very important insights into human cognition and behavior.”

Studying vegetarianism, especially in regards to understanding the motivations behind it, also allows researchers to optimize the food processing system to create and make healthful and sustainable food products more effectively. Additionally, this study brings up important issues regarding injustices in the food production industry, Hopwood said.

“Animal agriculture represents a profound social injustice – and the only one whose victims have no voice,” Hopwood said. “I hope our study gives researchers in this area a useful tool for assessing vegetarian motives, helps advocacy groups become more effective at communicating the importance of plant-based diets, and that ultimately people stop consuming animals and animal by-products.”

Since the food industry is one of the most significant human contributors to climate change, Schwaba said research, like this study, is important to promote scientific awareness. For this reason, he said it is important to improve our methods of persuasion about why people should become vegetarians.

“I’m very worried about global warming, and research has found that one of the easiest things that can be done to slow climate change is to stop relying on animals for so much of our caloric needs,” Schwaba said. “It uses a ton of water and causes a ton of pollution.”

Although Schwaba himself is not a vegetarian, he does not eat pork or beef for environmental reasons. He said he thinks more people, including himself, should switch to plant-based diets, or at least cut out meat more often.

“It’s not that hard to do, especially in Davis!” Schwaba said.