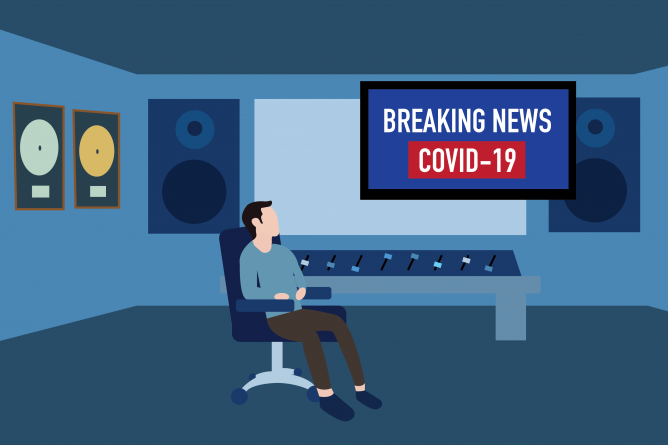 Singer-songwriter Alicia Keys debuted her new song ‚ÄúGood Job‚Äù during a CNN virtual town hall on April 24. Originally written for the personal heroes in her own life, Keys rebranded the song as an ode to the first responders and others who stepped up during the fight against COVID-19.

“A lot of times people don’t feel like they’re doing a good job,‚Äù Keys said in an interview with CNN. ‚ÄúThey feel underwater and like there’s never going to be a brighter day. Fast forward to now, with where we are now, and it’s almost like the song was written for this and I didn’t know it.”

Connecting to music during an uncertain and tumultuous time in history is not uncommon. Historians have referred to nursery rhymes of different time periods to better understand what was occurring culturally and politically.

Artists look to what is going on around them as inspiration for their music, creating a piece of art that resonates deeply with people and becomes a reflection of the world at large. Whether it be an inspiring ballad expressing gratitude for the common hero, as in Keys‚Äô song, or detailing political criticism such as U2‚Äôs ‚ÄúSunday Bloody Sunday,” songs about what the world is going through at a specific time speak to us.

The following is a list of contemporary songs that perfectly reflected, criticized or changed the world.

Although the song was initially inspired by people seeking refuge during a rainstorm, it is often remembered as a reflection of the social and political unrest of the time. Released in 1969 as the intro track to their album ‚ÄúLet It Bleed,‚Äù the song came to be known for its association with the Vietnam War and the tension in the world.The song‚Äôs legacy shows how people find meaning in music that is relevant to them, even if that is not the original intention of the music.

‚ÄúWell, it‚Äôs a very rough, very violent era,‚Äù Mick Jagger said about the album in an interview with Rolling Stone. ‚ÄúAnd Vietnam was not a war as we knew it in the conventional sense‚Ä¶ it was a real nasty war, and people didn‚Äôt like it. People objected, and people didn‚Äôt want to fight it. [Gimme Shelter is] a kind of end-of-the-world song, really. It‚Äôs apocalypse; the whole record‚Äôs like that.‚Äù

This title track of Green Day‚Äôs seventh studio album is one of the most popular songs from the politically vocal band. The song is heavily critical of news coverage during the Iraq War ‚Äî  condemning media outlets for imbuing paranoia and thus creating the ‚ÄúAmerican Idiot,‚Äù with America as ‚Äúone nation controlled by the media” that cannot think for itself.

Despite its divisive message, ‚ÄúAmerican Idiot‚Äù was praised by critics for its powerful critique of the media and coveted by the band‚Äôs young, equally frustrated and rebellious fans. The song was the band‚Äôs first on the Billboard 100 charts and it received a Grammy Award nomination.

In 1975, the United Nations announced the first ‚ÄúInternational Women‚Äôs Year,‚Äù with ‚ÄúI Am Woman‚Äù as the anthem of the year. Opening with the line, ‚ÄúI am woman, hear me roar / in numbers too big to ignore,‚Äù the song is reflective of the massive strides taken in the fight for women‚Äôs rights throughout the 1970s.

As second-wave feminism emerged, there were more people fighting for women‚Äôs rights, emphasizing workplace equality and reproductive rights. The song‚Äôs message aligns with what was going on at the time and was a powerful anthem for women everywhere.

‚ÄúI want to thank God because She makes everything possible,‚Äù said Reddy in her acceptance speech at the Grammy Awards for Best Female Performance. Reddy was ahead of her time in many ways, but her actions proved to be just as inspirational as controversial.

This 1964 song was inspired, in part, by the time Cooke was turned away from a Whites-only motel. Despite the mildly eerie tone, the song became a ballad for the African American community during the Civil Rights movement. The line ‚ÄúThere’ve been times that I thought I couldn’t last for long / But now I think I’m able to carry on‚Äù reflects the uncertain hopefulness that equality would one day come.

The song was recognized by the Library of Congress for its importance. It is ranked as number 12 on the Rolling Stones Top 500 Greatest Songs of all time. The message of endurance and effecting true change in the world is as relevant today as it was in the ‚Äô60s.

“It’s been a long time coming,” said President Barack Obama in his speech after winning the 2016 presidential election. “But tonight, because of what we did on this date in this election at this defining moment, change has come to America.”

Public Enemy wrote this song at the request of film director Spike Lee, who needed a song for his film ‚ÄúDo the Right Thing‚Äù about racial tension in New York. And the song reflects this theme. Released in 1989, the song resonated with the injustices racial minorities face every day.

‚ÄúThe song broke at a crucial period in America’s struggle with race,‚Äù wrote Laura K. Warrell for Salon. ‚Äú‚ÄòFight‚Äô demanded action‚Ä¶ Every kid in America, white, black or brown, could connect to the song’s uncompromising cultural critique, its invigoratingly danceable sound and its rallying call.‚Äù

The song is often referred to as one of the most important rap songs ever, winning accolades including a spot on the ‚ÄúSongs of the Century‚Äù list compiled by the Recording Industry Association of America and the National Endowment for the Arts.

After the terrorist attacks on September 11, 2001, many songs about the unrest the country was feeling were released ‚Äî songs that even changed country music itself. Alan Jackson emerged as one of the most popular artists of the time, in part due to this song. He received his first Grammy Award for Song of the Year in 2002.

Originally published as a poem by Jewish-American writer Abel Meeropol in 1937, this song is a haunting ballad about the lynchings of African Americans. Holiday‚Äôs voice is powerful and mystical as she sings about the ‚ÄúBlack body swinging in the Southern breeze / Strange fruit hanging from the poplar trees.‚Äù

Jazz writer Leonard Feather described it as “the first significant protest in words and music, the first unmuted cry against racism‚Äù in an article for the New York Times.

The song was also added to the National Recording Registry in 2003. It serves as a powerful reminder of the atrocities that occured in our country’s past. ‚ÄúStrange Fruit” serves as an evocative memory of an appalling time. Holiday‚Äôs voice and the eerie musical composition takes the listener to that time and forces them to live in that moment, which is why this song is so important.

This list only includes music that is relevant to the U.S., but musicians in every country and of every culture reflect on the state of current political and social affairs when creating their art.