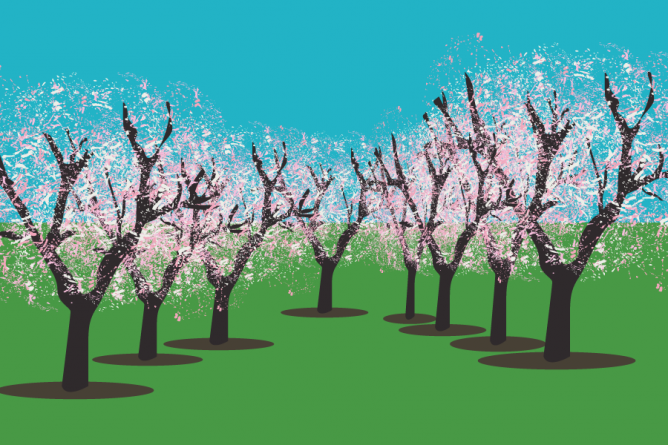 Whole orchard recycling of almond trees is a sustainable practice that can significantly increase the productivity and health of subsequent replanted orchards and soil according to a study conducted by UC researchers.

This practice entails on-site grinding of whole, removed trees and the incorporation of the wood chips back into the almond fields before the next replanting. Brent Holtz, a UC cooperative extension county director and farm advisor in San Joaquin County, has been studying whole orchard recycling for over 10 years.

Holtz began the first orchard recycling trial site in 2009 at the Kearney Research and Extension Center in Fresno County after seeing the potential benefits of this practice on his own family’s almond farm. The trial had two main treatments, whole orchard recycling on one plot and a separate plot that incorporated ashes from burned trees into the soil.

“We could see that putting the wood chips back on on our farm was improving our soil quality and as that went on several things happened,” Holtz said. “The Clean Air Act caused growers to be restricted on burning their trees and co-generation plants were being built which took farm waste and forestry waste to burn to generate electricity.”

The stricter air quality regulations were forcing farmers to find alternatives to the common practice of on-site burning of their trees. Farmers still had the option to give their waste to biomass power plants, but in 2015 this all changed. In a shift to renewable energies, utility companies stopped renewing contracts with biomass power plants, causing the shutdown of many plants.

Over the last five years, Holtz has continued the field site in Fresno with additional help from Amélie Gaudin, an associate professor of agroecology in the department of plant sciences. With data reaching back almost 10 years, they have collected substantial long term data showing the many benefits of whole orchard recycling.

In terms of soil health, the researchers found a 58% increase in soil carbon as well as a 32% increase in water holding capacity compared to conventional burning practices. Overall productivity of the trees increased by 20% as well.

“The soil will be able to absorb the water rather than having it running off site because of the better soil condition,” Gaudin said. “The soil is less compacted and more porous which helps recharge the groundwater as well.”

While the cost of whole orchard recycling is $1,000 per acre and more expensive than purchasing permits for the burn method, the benefits of increased yield and soil health provide incentive for growers.

“Whole orchard recycling is expensive but when research came out that it was better for their soils and had increased yields, growers became very interested,” Holtz said.

Additionally, last year the California Department of Food and Agriculture began the Healthy Soils program, which provides growers with funding to support their own implementation of whole orchard recycling. The benefits of this practice span even further than just soil health, since its use has the potential to decrease a grower’s contribution to climate change. By preventing the burning of trees, large amounts of carbon are not being added directly into the atmosphere.

“When you take all this wood and burn it, all of the carbon trapped is released back into the atmosphere,” said Kelsey Brewer, a postdoctoral student in the soils and biogeochemistry graduate group. “When we bury the wood into the soil, some carbon will decompose and then some carbon will long-term stay sequestered in the soil.”

Soil is one of the largest carbon sinks on earth and the opportunity for farmers to add this immense amount of carbon to the soil does not come often. Growers typically remove their orchards every 25 to 30 years, so Holtz sees this as a special chance to increase the carbon in soils.

“The huge thing is that our soils in California and especially in San Joaquin County tend to be very low in organic matter,” Holtz said. “Most times, growers plant their trees and add synthetic fertilizers. They typically don’t add a lot of organic matter back to their soil, so this is a once-in-a-20-years opportunity.”

Over the next decade, 30,000 to 40,000 acres of almond orchards will be removed each year, according to the Almond Board of California. The researchers hope that widespread adoption of whole orchard recycling will occur and allow for increases in soil health and carbon sequestration across the state.