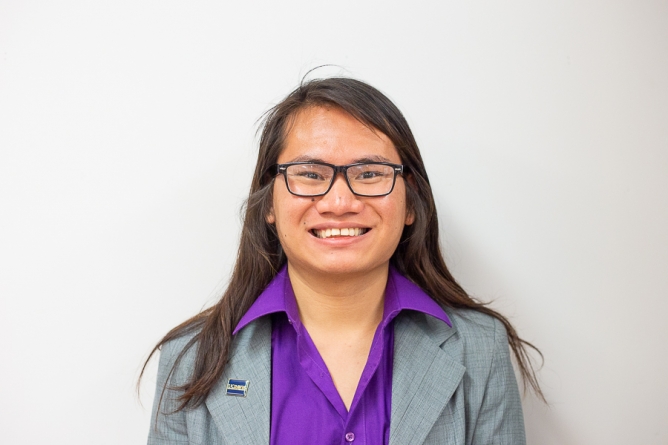 “People believe in you.”

Ko Ser Lu Htoo’s father told her this when she was elected to serve as an ASUCD senator. Most would consider this a remarkable victory in itself, but for a trans woman of color and Karen refugee, this was yet another testament to Htoo’s tenacity and courage.

There are 7.5 million Karen people in the world. The Karen are an ethnolinguistic group from southeastern Myanmar (formerly Burma) and they make up approximately 7% of the Burmese population. Although they used to have their own independent state, the Karen people are now the target of persecution and ethnic cleansing by the Burmese military. Only 15% of the Karen people are Christians, making Htoo and her family a minority within a minority.

Htoo, the fifth child of a Karen Christian missionary, was forced to flee her northern village when they heard the bell ringing, installed by the village to signal when the Burmese military was near. With just the essentials, her family left their burning village and walked for 10 days over the mountains to a refugee camp on the Myanmar-Thailand border.

In the United Nations refugee camp, Htoo (who also uses they/them pronouns) focused on her education. Her family no longer farmed for their food but instead relied on rations. After five years, her father applied for asylum in Canada, but they didn’t qualify; after seven years in the refugee camp, their asylum application to the U.S., which 12-year-old Htoo pushed to get submitted, was approved.

“I was so scared!” she exclaimed. “But it was totally crazy and amazing. The whole time I thought the plane was going to fall out of the sky!”

Htoo thought to herself when she saw the small apartment she was expected to share with her seven siblings and parents.

“It wasn’t at all like we saw on TV or in magazines,” she said. “We thought America was all big, fancy houses.”

But she was fortunate to have a new home in the U.S., and her apartment building became a community. There was no hierarchy — everybody was from somewhere else. She started her first day of middle school speaking no English, and endured bullying from her classmates.

“You don’t know your homework!” they taunted in a sing-song manner.

For high school, Htoo transferred to Oakland International High School, where there were 300 students from 35 countries who spoke 37 languages. Here, no one was bullied.

Although no longer bullied, Htoo felt an all-consuming feeling of confusion. Htoo needed to “discover who she was” and joined her school’s Gay Straight Alliance (GSA), of which she would later become the president. In this space, she and her fellow students shared stories, watched movies and learned from each other. Still not out to her family as transgender, Htoo did what many other teenage girls were doing: put red lipstick on in the school bathroom before the first period bell rang.

At her senior prom, she wore a dark blue women’s suit but no tie — nothing too girly or too boyish. Her boots had a one-inch heel. Her older brother dropped her off, and once she was at school, she put on her red lipstick in the bathroom. When she made her appearance on the dance floor, some peers clapped, others flashed a smile — overall, she was met with acceptance.

“I feel happy,” she thought to herself. “I wasn’t ready to come out to my parents or my teachers. I just wanted to explore.”

After graduation — where her alluded to her identity in her speech — she came out to her very traditional family during a family meeting. She was met with some acceptance but mostly tolerance. Htoo understands that not everyone will like who she is, but the most important thing is that they respect who she is. It wasn’t until she won her seat on the ASUCD Senate table that her father would see in her what she saw in herself. But she still doesn’t wear her signature red lipstick and high heels at home or at church, where her father is the pastor.

“We need to care. We have to go and participate.”

Like many students, UC Berkeley was her first choice for college. Originally disappointed, she took the advice of her English teacher and enrolled at UC Davis, taking the challenge to go off on her own in a new, scary place — again. She found a sense of community at the LGBTQIA Resource Center, the Cross Cultural Center and her floor in student housing.

A political science major, she took to ASUCD and got involved as quickly as she could. At UC Davis, as in her home of Myanmar, there were people who weren’t being represented by the administration and government. At the Senate table, as part of the community advocacy-focused BASED Slate, Htoo fought against bigotry and homophobia. People in positions of power purposefully misgendered her and disrespected her community, but that didn’t matter — she was there to give a voice to the marginalized.

“It’s important to be transparent and inclusive and make sure their voices are heard at the table,” Htoo said. “It can be partisan, but you can’t leave anybody behind, any communities behind.”

As a senator, Htoo adopted countless units and served on countless committees, so many that she can’t even name all of them anymore, but she cared deeply about each and every one. She fought for more scholarships and endorsed both the Unitrans Fee Referendum and the ASUCD Basic Needs and Services Referendum.

“We need to know what’s going on in the university, where our money gets spent,” she said shortly after being appointed the BASED Chair.

Last year, Htoo received her American citizenship — she is officially a U.S. citizen, no longer a refugee. But she still values her culture and carries it with her every day. Every weekend, she teaches at Karen Sunday school where she wears her traditional clothing.

“I want them to know who they are,” she says about her students. Her lessons focus on her native language and their traditions.

In her native language, Ko Ser Lu Htoo means gold crown. As both a trans woman and recent American citizen, she has twice made the decision not to change her name because it carries her ancestors and her identity.

“It’s about my ethnicities, my blood, the Karen people,” Htoo said. “It has to do with my identities. By keeping the name, it doesn’t mean it’s going to take away my identities with the LGBTQIA+ community. I could change my name to Carol or Katie, but it doesn’t reflect who I am as an ethnic minority from Burma.”

Htoo and her mother, who also just received her American citizenship, recently returned from a mission trip to Myanmar after taking a quarter off to work with their family and fellow Karen people. Now back in school, Htoo commutes to and from Dublin in the East Bay every day so she can be near her family.

This passion for her people’s struggle does not fade away when she is in Oakland or Davis. One day, she hopes to move to Washington, D.C. to continue her advocacy work and give hope to the Karen people.

“I will not rest until my Karen people regain their state and freedom from the corrupt and evil Burmese government and its military.”