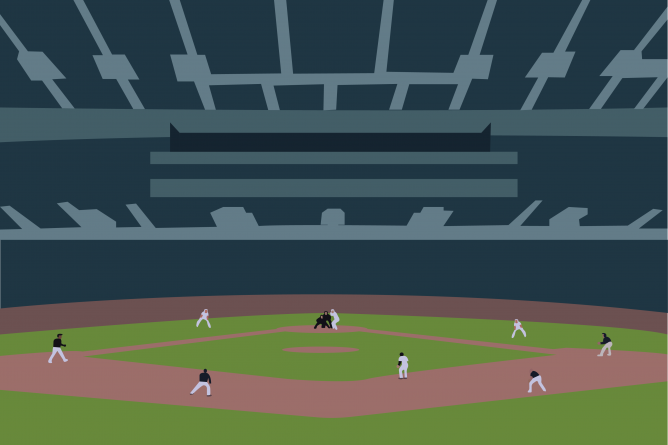 As sports leagues in the U.S. begin to reveal plans for their potential return, professional  leagues across the world are providing the first glimpse into what could be the new reality for live sports amid the coronavirus pandemic.

Beginning in early May, South Korea became one of the first countries to resume play, as the Korean Baseball Organization (KBO) implemented several preventive measures in an attempt to make the playing environment as safe as possible.

Players and coaches must go through fever screening prior to entering stadiums and are not allowed to high-five teammates with bare hands. Masks are required for umpires and base coaches, as well as for anyone who enters training facilities. The KBO has also decided that if any team member tests positive for the virus, the league will immediately shut down.

Germany’s Bundesliga became the first major soccer league to return to play as well, implementing their own protocols such as disinfecting match balls, fever screening and requiring substitutes to wear masks and sit six feet apart from each other on the bench. Players have also been discouraged from typical celebratory actions such as hugging and high-fiving.

Italy’s Serie A and England’s Premier League have also announced their expected return around mid-June. They will most likely be following similar preventive measures.

Among the many preventive measures implemented, the one that presents the biggest challenge to a return to normalcy is the new reality that all sports are going to have to be played without fans — or a severely limited number of fans — for the foreseeable future. South Korea and Germany have attempted to ease this obvious sense of emptiness by placing cutouts and images of their fans throughout stadiums.

The KBO said it hoped to have fans return to games as soon as early June, starting out with 20% capacity and increasing from there. But a recent spike in coronavirus cases in South Korea has put that plan in jeopardy for now as the situation remains uncertain.

In the U.S., leagues have slowly started to release their plans to move forward with their respective seasons. But considering the country has had more confirmed coronavirus cases than any other, it will likely take more time for sports to resume.

The MLB released a detailed, 67-page safety proposal regarding its potential return for the 2020 season, which includes a wide range of modifications it hopes to implement.

The proposal consists of procedures such as multiple daily temperature screenings, balls being thrown away after being touched by multiple players and consistent testing for players and staff, which would require upwards of 10,000 tests per week. Players are also discouraged from showering at stadiums and socializing with opponents during games and are not allowed to use any ride-sharing apps when traveling.

The MLB’s possible 2020 season relies on approval from the MLB Players Association before moving forward with an official start date. All 30 teams were consulted regarding the proposed safety protocols, but the two sides still remain in negotiations regarding the financial details.

It’s apparent how much effort and attention-to-detail will be required if the MLB does decide to move forward with the season. Although it seems to have a very thorough set of guidelines, it is difficult to predict exactly how all of this could be carried out, and whether it will succeed at all.

The NBA is also working on a plan to resume its season, as teams have opened training facilities under a strict set of protocols that players and staff must follow. These include a check-in area upon arrival to training centers, temperature screenings and training on an assigned court. Only four players are allowed to practice at a time, and groups must rotate at designated times to avoid coming into contact with one another.

The NHL released its plan to move straight into the playoffs with a 24-team playoff format, but has not yet revealed when the season will be returning — if at all. It is expected that the NHL will select two “hub cities” where games will be played to avoid traveling as much as possible while also relying on temperature screening and voluntary workouts with limited numbers of players.

Neither the NBA nor the NHL have released official health protocols or specific dates in which they plan to resume their respective seasons, although the NBA is targeting July 31 as a possible return date.

The National Women’s Soccer League (NWSL) decided it will be returning to play, scheduling a month-long tournament in Salt Lake City at the end of June. The U.S. Women’s National Team Players Association and U.S. Soccer Federation have both agreed they will allow each player to choose whether or not to compete in the tournament. If the tournament continues as scheduled, the NWSL will be the first U.S. league to resume play since the professional sports shutdown.

Although the future of sports remains uncertain, the effort put into resuming play indicates the strong desire that owners, players and fans have to bring sports back into their lives. While it may seem like an attractive concept, there are many difficulties leagues could end up facing if seasons return too soon.

As displayed in the MLB’s proposal, there are a large number of guidelines that players and staff must remember to follow, and questions remain about how leagues are going to monitor every single aspect of the game to make sure every rule is being adhered to.

There is also the possibility of a player testing positive for the virus, which could ultimately lead to their teammates or family members being infected as well. Leagues will have to account for this possibility and decide whether or not resuming their seasons is worth this risk.

Between the lack of close celebration that fans are so used to seeing from their teams and the unusual silence from the stands, fans and players are constantly reminded of exactly how far the world is from any sense of normalcy — not to mention that players adhering to strict guidelines day in and day out might begin to feel more disconnected from their sport as ever.

Nonetheless, there comes a time when the sports world will have to start again, and fans and players can only hope that leagues will account for all possible risks and resume play when it is safe to do so.