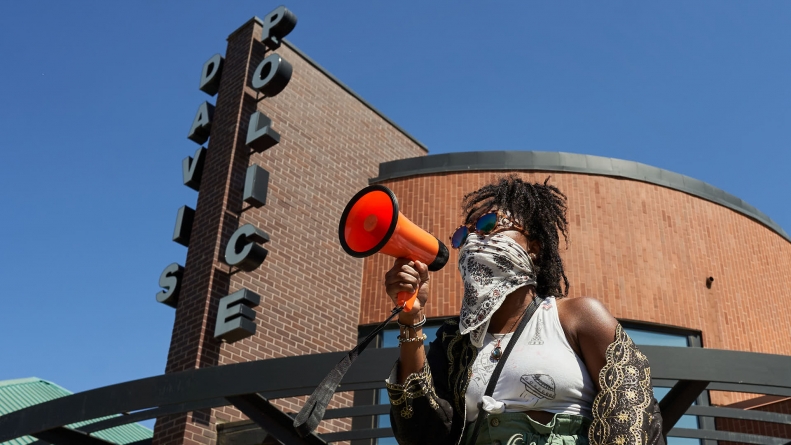 Members of the Davis community marched from the Community Park to the Davis Police Station on Saturday, June 6 in solidarity with Black Lives Matter. Leading up to the protest, however, the protest’s organization was called into question after leader Amber Greigo posted that the Davis Police Department had been notified of the event ahead of time. In addition, Greigo deleted the posts of two Black women, Chelyah Miller and Mariah Smith, on the People in Solidarity with Black Lives Matter Facebook page.

Miller, a UC Davis alumna, said she asked Greigo about her organizing experience and about the safety of the protest if police became involved but received few answers.

“There was the issue of Amber working with the police,” Miller said. “They would be given information about what was going to happen, and the route that protesters were supposed to walk was posted on Facebook, and there didn’t seem to be a way that Black and Brown people would be safe. And then I asked things about the protest, like what she knew about bail as well as her organizing experience. My questions — at least largely — remained unanswered.”

“One of the main things was Amber’s inability to have an action plan,” Smith said. “If things went wrong, she did not have an idea of if we would be given a misdemeanor or felony. She had no idea where, as protestors, we would be placed if we were detained.”

Both Miller and Smith’s posts were deleted by Greigo. Both attended the Saturday protest in Sacramento instead of this one planned for Davis.

On Friday night, Greigo posted an apology on the page and an announcement of the protest’s cancellation.

“I never meant to put anyone in danger but I acknowledge that I made several mistakes,” the post reads. “Also however I may have felt about posts I shouldn’t have removed them period. This a formal announcement that the event will be canceled.”

Despite the cancellation notice, the march still drew a crowd of protesters. Nicole Claiborne, a third-year Ph.D student for neurobiology at UC Davis, is one individual who attended the protest.

“I didn’t know the protest had been canceled until I had met up with a couple of people to go,” Claiborne said. “I was actually surprised by how many people ended up showing up. I’m not sure if it was because they — like me — weren’t aware it had been canceled, or if they just decided they were going to go regardless.”

At the protest, people handed out masks, water and snacks. Workers walked out of restaurants, clapping and cheering on the marchers. Protesters chanted “No justice, no peace — no racist police” and carried signs declaring “Racism is a pandemic too” and “Black blood on blue hands.”

Claiborne explained that protests are important because they draw large crowds that show the strength of the movement.

“Protests visualize support for people,” Claiborne said. “I think protests are important because they are disruptive, and they need to be. It shows numbers, and protesters are disruptive in the right kind of way to drag people out of their comfort — to let them know that you can’t just sit comfortably in a society that hates and hurts other human beings.”

Protesting is not the only way to support the international responses and actions taking place following the police killing of George Floyd.

“There are definitely a lot of ways to support the movement, and protesting is only one of them,” Miller said. “You can sign petitions, donate to bail funds, help people make snack packs for protesters or buy resources like water, snacks and masks. You don’t have to go to a protest to be involved.”

Protesters walked from the Community Park to the Davis Police Station, where a number of speakers shared their stories and beliefs about how everyone can support Black Lives Matter.

Although the protest was peaceful, it escalated when a man aggressively walked into the crowd shouting “All lives matter.” Some members of the crowd yelled for him to leave, and he was escorted away by the police.

Claiborne, who spoke at the protest, wanted to share the importance of being actively anti-racist in everyday life and confronting uncomfortable racist ideology.

“We need to get comfortable with being uncomfortable,” Claiborne said. “Now is the chance for people to finally become aware of acting anti-racist. There’s a lot of work to do, and if we can get more people who are actively anti-racist to work on themselves and become better people, then they can get into positions of leadership and they make change.”