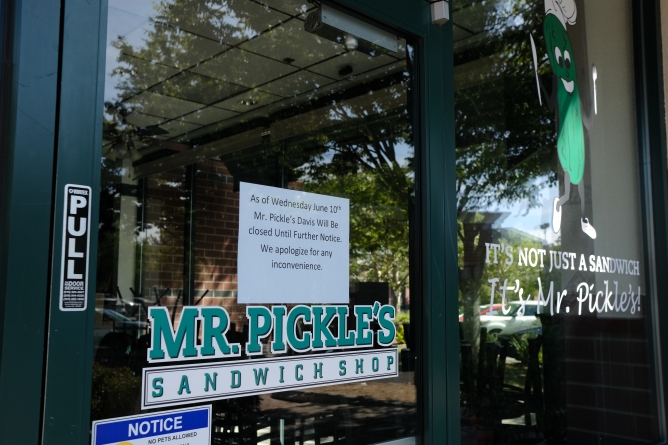 Mr. Pickle’s Sandwich Shop, a franchise network of locally owned shops, confirmed the closing of the location in a statement on Facebook.

“Corporate has been notified of the alarming and painful statements made by the owner of the Davis shop to his staff,” the statement reads. “We made the decision to terminate his franchise and [it] is now permanently closed for business. If that location ever re-opens, it will be under new ownership that upholds our corporate standards.”

In screenshots of the email posted to Facebook, franchisee Mickey Mann described the “bullying and attempted oppression” he and his wife, Bonnie Mann, faced over disagreements of employees wearing BLM pins in the store.

“Every single allegedly egregious act, insensitive terminology, or supposed aggression that I have committed, that has insulted your sensitivities, has happened because of your aggression against me,” Mann wrote. “When all of this started, I did not come to you and push my opinions and beliefs on you. You came to me with the intention of forcing your beliefs and opinions on me.”

Mann argued that the employees were bringing political issues into what should be an apolitical workspace and said he would have the same reaction if it was “any far-right organization.” He continued on to compare the BLM movement to the KKK.

“The BLM is the flip side of the KKK,” Mann said. “Their tactics are out of the Mafia play book. They are no better than some of the worst oppressive regimes in the world. Equal rights, fairness under the law, and any other buzz phrases they use are not their agenda. Oppression, turmoil, and chaos is their agenda. Bonnie, I, and Mr. Pickle’s Davis are victims of this and proof of this.”

Mann also alluded to giving names of employees to the police if Mr. Pickle’s storefront experienced any damage.

“I have no fear of any or all of you quitting,” Mann said. “We started the store with zero employees, so if necessary, we will rebuild from zero again. If Mr. Pickle’s Davis suffers window breakage, vandalism, or theft, I have names of the people that I will hold responsible.”

Mann added that his wife has contacted the Davis Police Department concerning the “libel, slander and threats” made toward the couple. According to police crime logs, the Davis Police Department received a call from a Cowell Boulevard business owner around 10 p.m. on Tuesday. The caller said they had been threatened by BLM activists and asked for a police presence as they installed a closing sign on their business.