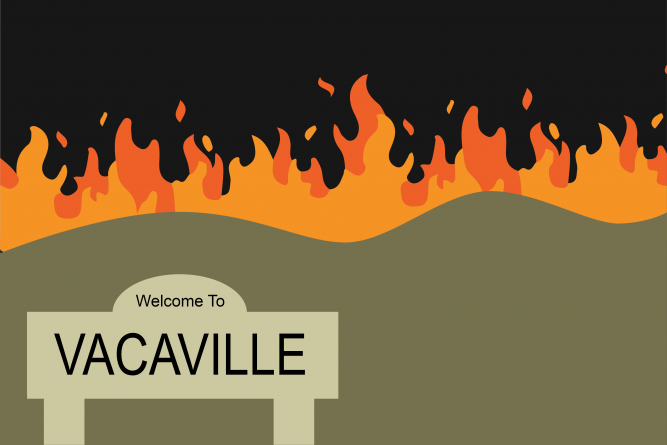 On Aug. 16, multiple early-morning lightning strikes sparked the LNU Lightning Complex fires in two locations in Northern California. The Eastern location, named the Hennessy fire, has threatened parts of Napa and Solano Counties, as well as the city of Vacaville.

Vacaville declared a state of emergency after some residents were forced to evacuate and roughly 4,500 homes were threatened.

The emergency declaration reads, “As a result of the size and speed of fire movement, during the late night and early morning hours of August 18 – 19, 2020 the LNU Fires moved perilously close to the City limits and residential areas of the City of Vacaville and became an immediate threat to the City […].”

All evacuation orders in the city of Vacaville were lifted by Aug. 24.

As of Aug. 26, the LNU Lightning Complex fires were 33% contained and had burned over 350,000 acres. In a press conference, Cal Fire Sonoma-Lake-Napa Unit Chief Shana Jones offered gratitude for everyone helping the state address the wildfires.

“All of the resources in the state of California are working incredibly hard,” Jones said. “We’ve gotten so much support from outside of the area, outside of the state […] I just want to say thank you to everyone—including those that are supporting our evacuees, our communities to provide them with help for getting back into their homes.”

The lightning storms also started the SCU Lightning Complex fires near San Jose, which has burned over 365,000 acres and is 25% contained.

Assistant Adjunct Professor of Atmospheric Science Matthew Igel explained the processes that led to the summer lightning storms that sparked both the LNU and SCU Lightning Complex fires.

Wildfires also pose a unique threat this year due to the COVID-19 pandemic. Both smoke inhalation and crowded evacuation centers could contribute to the spread of the disease.

Because of the fires in Northern California, air quality in the Sacramento area has suffered. Spokesperson for the Sac Metro Air District Jamie Arno explained that the masks mandated because of COVID-19 don’t block smoke, so staying indoors is the best way to protect your health.

“Smoke is unhealthy to breathe,” Arno said. “If you smell smoke, you want to go indoors or to another location. The cloth and surgical masks that we’re using for COVID are not effective when it comes to protecting the body from particulate matter air pollution.”

The CDC explains that inhalation of smoke from wildfires damages the lungs, potentially increasing the severity of COVID-19 symptoms.

“Exposure to air pollutants in wildfire smoke can irritate the lungs, cause inflammation, alter immune function, and increase susceptibility to respiratory infections, likely including COVID-19,” its website reads.

UC Davis Associate Professor of Regional Climate Modeling Paul Ullrich explained that, in the event of a wildfire evacuation, maintaining social distancing might not be the highest priority.

“Inevitably, evacuated folks will find themselves indoors with many conditions which will have the potential to drive infections up,” Ullrich said. “People are going to wear masks, but once your home has been burned down, COVID precautions seem like they would take a backseat.”

“We need to get a status change on the fires—they need to be more under control and produce less smoke,” Arno said. “Or, we need to get a new weather pattern in the region to clean things out. Until one or both of those happen, we expect to continue to have this poor air quality.”

Ulrich stressed that there could likely be more fires during peak wildfire season, which ranges from May to October.

“I fully expect us to continue suffering from continued wildfires throughout the season,” Ullrich said. “Even in those areas that haven’t been burned already, we’re seeing incredibly dry conditions. They’re prime for the occurrence of wildfires—any spark could set some of these areas ablaze.”