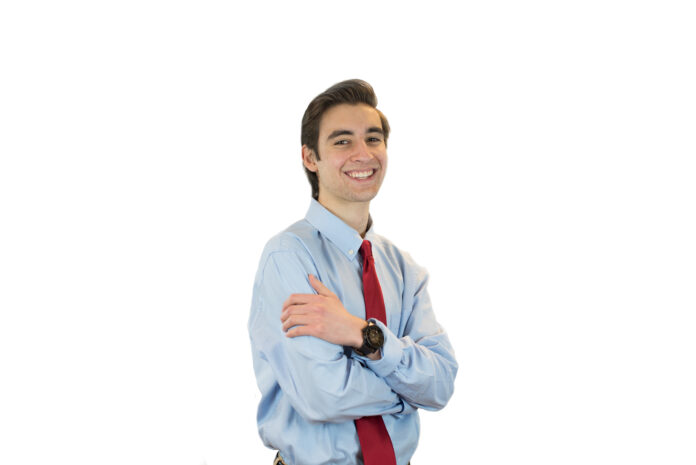 The following transcript has been edited for length and clarity.

Alex Cohen: My name is Alex, my pronouns are he/him/his. I’m a first-year student. I’m majoring in neuro bio, the NPB major.

TCA: And are you associated with a slate?

AC: When I first came to school, I was sort of involved in student government in my high school. So I reached out to both sides — I reached out to BASED, I reached out to Thrive. I had a meeting with both of them, and I felt that Thrive encompassed more of my values that I preach [and] was more encompassing of student diversity as a whole. Ultimately, I decided to go with Thrive, because of the way that they welcomed me into their circle.

TCA: What were some of the values that Thrive presented that attracted you to the slate?

AC: I’m Jewish, and something that was really dear to my heart was the way that they protected against anti-Semitism, which is one of my issues, one of my platforms. That was sort of a big thing that they showed to me — that they were going to fight anti-Semitism. And that was pretty big to me. But also just the idea of how inclusive they were. It’s not a matter of conservatives or Republicans or liberals or anything like that. It’s really for the betterment of the people and who they are, instead of  party and party platform.

TCA: What are your specific platforms and how do you plan to accomplish them?

AC: My first platform is mental health. Currently in ASUCD, I’m the Student Health and Wellness Committee chairperson. Because that position has basically been extinct for like three or four years, it’s pretty much been my job to bring it back up. I’ve been reaching out to a bunch of different mental health, as well as physical health, organizations such as substance abuse — Aggie Sunrise — and other organizations like that. [And] NAMI [National Alliance on Mental Illness]. My main goal with reaching out to them is to make sure that [their] resources are being received by the students, that they’re being put out to the students, so that the students actually know that these resources exist. My main goal with mental health, and mental health in general, is to sort of just advertise that these services do exist. And publish that these services exist, as well as apply for grants. I’ve already started looking at grants because I know a big, big problem with counselors is a lack of them. I’ve really been looking into grants as well as funding situations in order for these things to actually become achievable.

As for the anti-Semitism part, I’ve been to Hillel, I’ve been to other Jewish organizations and I’ve heard from students of non-Jewish origin [about] how they have dealt with hate and discrimination. I really want to make it one of my key points, one of my focuses, to deal with this sort of issue as a whole. And so by doing this, I hope to have on the UC Davis campus — as well as in Yolo County [and] Sacramento — town halls to address certain issues.I hope that through discussion, as well as [the] recognition of certain objects and certain things that we will be able to get sort of this mentality [that] hate as well as anti-Semitism aren’t really welcomed on our campus. Of course, I’m more tailored toward the Jewish side of that, that’s why I’m fighting more toward anti-Semitism, in general.

As for my third point, it’s more about campus unity. Obviously, there’s super polarized current campus politics today. It’s taken me two quarters to realize that, [just] already. And so that’s something that’s not welcoming. I hope to bridge that gap through more communication as well as nonpartisan measures.

TCA: What specific measures do you think need to be taken?

AC: So like with rhetoric in the Senate, if you go to the Senate meetings, it’s super one-sided. Just making the legislative pieces more open to both slates — all types of students — because it seems very targeted at this point. Communicating that everybody’s trying to work for the same purpose, the purpose of the betterment of the students, and having that as our end goal in mind.

TCA: Have you been to a lot of Senate meetings?

TCA: Can you provide a specific example of legislation that has been particularly one-sided in your point of view?

AC: Of course. So about two weeks ago, there was legislation about slates, about slate regulation, and it was introduced by the side of BASED. They were trying to regulate slates, which, sure, that could be a good thing in the end, but they said that they consulted with everyone and all sides. However, nobody from Thrive was contacted, nobody from Unite! was contacted [editor’s note: the Unite! slate no longer exists], nobody from Independent was contacted. It simply seemed like it was [a] resolution and article that was just perpetrated by one side. Even if it was BASED or Thrive or anything like that, it was simply perpetrated by one side, in my viewpoint. And with that, I felt like it was targeting one sort of group, instead of the consultation of everybody else.

TCA: I believe that after the last special election during Fall Quarter, there was a significant amount of commenting on Facebook that occurred on Justin Hurst’s Facebook page, and I believe you were a prominent voice in those comment wars. So I think my question here is twofold: One, why did you feel it was necessarily important to comment and criticize the state of affairs? And then two, do you believe that your voice contributed to some of the infighting in ASUCD?

AC: So with regards to the slate thing, I know you mentioned that there was something that failed last quarter, but then there was something reintroduced about two weeks ago, either two or three weeks ago, but as for that, that was that. As for the [comments], the reason why I sort of jumped into the arguing was because I saw a few different people getting attacked that I didn’t really feel deserve to be attacked such as George [Liao], as well as Justin Yap. He was one of the candidates for student advocate. It wasn’t a matter of partisan politics for me. It was more of, ‘You’re going to be attacking somebody that I take value into, so I’m going to be defending this person to the best of my ability.’ I don’t feel like the things that I said had an influence politics-wise, because it wasn’t [as if] I was attacking one side versus the other, which is something that I have no need to do. It was more so defending one of my friends, defending somebody who I take great value into and just sort of shining [a] positive light in them when everything is sort of being attacked.

TCA: What is your stance on the Basic Needs and Services Referendum?

AC: I’m completely in favor of that. I actually just came from a meeting with Kevin [Rotenkolber, the ASUCD controller]. Last night, I was perusing the internet and saw some contradicting information. And he was telling me about how everything’s broken down. So I’m completely for it, because without it, I don’t believe that a certain amount of units, as well as student jobs, can be achievable. Like he says, since 1979, it literally hasn’t increased since that $8 baseline. Everything else has been increasing — the Unitrans, the EOP, everything has been increasing. The CPI adjusted for inflation, it’s all been increasing except the baseline fee. And so I think it’s [been] 40-50 years. I think it’s time to increase it to a certain amount.

TCA: Two follow up questions for that: What was the conflicting information that you saw online? And second, what specific actions have you personally taken to ensure its passage?

AC: I’m also the assistant to the controller. So I dealt closely with Kevin [Rotenkolber] in all matters like this, and so he’s been my mentor to me with regards to this issue. So last night, I was Googling what the basic fees and all that kind of stuff was, and then I found the resolution in 2016 for the Cal Aggie, for you guys, for the fee increase [of] $3.73. I was looking more into the archives, and I saw something from like 1999 saying that the fee went from like $23.50 to $35 in total ASUCD fees. I just questioned Kevin, like, ‘Why? How come it seems to be increasing?’ And he explained to me that everything else is increasing around the fee, except the fee. The only thing that’s stagnant is that whole overall $35.

TCA: In terms of your platforms focused on mental health and anti-Semitism, I think as a freshman, you would inherently have limited knowledge about the histories of both on campus. What would you do to compile an institutional history of both so as to better combat those issues on campus?

AC: For mental health, that’s chiefly the purpose of why I’m trying to reach out to as many clubs on campus that have mental health or health in general as their main purpose, like Aggie Sunrise [and] NAMI. I’ve been trying to reach out to them. I’ve been going to their meetings. I’ve been attending the meetings, and I’m trying to see their purpose and how they can better provide for students. My ultimate goal, with the Student Health and Wellness Committee chairperson, which I’m hoping to achieve by the end of Spring Quarter, is [to] have a conference which has all of these different health organizations. Like, drug abuse over on this side, mental health on this side, so that students actually know that the resources are available to them, instead of having to search for them [or] go through the complicatedness of the website.