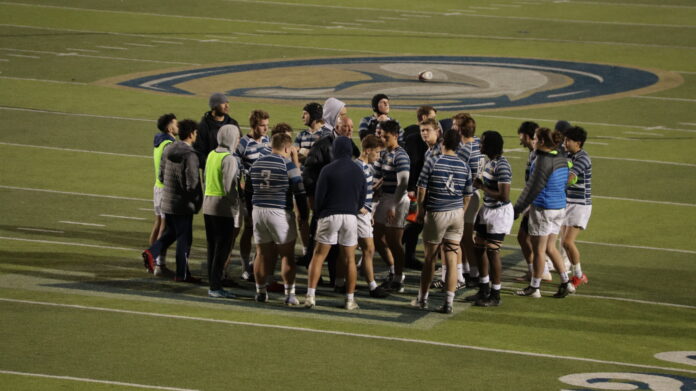 As the club continues to grow, team hopes more support grows as well

Often overlooked due to the multitude of Division I sports offered at UC Davis, sport clubs have been a crucial part of the college experience for many students. With 39 clubs being offered in Fall Quarter 2020 alone, it is easy to see how they can go under the radar. Still, these clubs carry the same work ethic and competitiveness that you can find on any team and among their members, there is no lack of passion. For the UC Davis men’s rugby club, the journey to get where they are today has been one that has taken a lot of work and commitment by all players and staff involved.

Players on the UC Davis men’s rugby club range from those who have played their whole lives to those who just discovered the sport upon arriving on campus. Split into the A side and B side, the club fields both teams, one for those just starting and one for those more advanced or more familiar with the game.

“I like to describe it as, in high school you have the varsity team and the JV team,” said Thomas O’Brien, the UC Davis Men’s rugby captain and fourth-year civil engineering major. “We have the A side, which are the 15 best players and the subs and the B side are the other players not in those 15. Although you are not in the starting 15, you can still get a lot of games in.”

But, in contrast to junior varsity and varsity football, the support from the teammates, regardless of which side they are on, is always there.

“What’s great about after playing an A side game is that whether you are on B side or not, you get to sit there and watch your teammates play,” said Jordan Naumburg, the President of the men’s rugby club and third-year mechanical engineering major. “I think that’s awesome because the B side players see that the older guys do care about them. Having [them] watch you, supporting you and cheering you on really gives you that sense of community.”

The supportive atmosphere that surrounds the club is one of their major keys to success. Being unable to give out scholarships, the recruitment process can be a tough venture for all clubs.

“That’s our biggest challenge as a club level [team],” O’Brien said. “There’s a few teams that have scouts and can give out scholarships. Our recruitment process is basically just face-to-face interactions, friends and just telling others about the club.”

Meeting with people face to face, tabling or telling a friend are all ways that they recruit, and while that may be a disadvantage in terms of acquiring elite talent from across the country, there is some benefit with that close interaction.

“You get to meet people on a personal level,” Naumburg said about the recruitment process. “You get to enjoy your teammates. I think this is something that we have that others don’t, because we go out and meet people. Some of my best times in college have been with [this team]. To have those [teammates] you reach on a personal level makes the dynamic of the team much better.”

Although they are a club sport, they compete at the Division IA level which allows them to play elite teams like Saint Mary’s, Santa Barbara and Grand Canyon University among others. After winning back-to-back Division IAA national championships in 2015 and 2016, the club made a jump to the top division, playing in the DIA California Conference. Now in the highest possible division, they hope to compete at their highest level possible, even if they don’t have the resources the other schools may have.

“With one word to describe us: underdog,” Naumburg said. “I feel like we walk into a lot of these places that have all these fancy stadiums, funding and we just play with our hearts out. We play with everything.”

In a normal year, Fall Quarter serves as a preseason, as they begin practices, get new players up to speed and play games that will not be officially counted, but are helpful for getting in practice reps. The winter is when they begin their competitive league games, scheduled every one to two weeks. The spring marks the beginning of playoffs and if they qualify, they work their way up to the National Championship. If they do not qualify, they all get together and wind down the season, playing scrimmages among each other and finishing off the year.

This has been anything but a normal year, however, and the rugby club, like all others, have felt the effects of the ongoing COVID-19 pandemic. All activities for the fall have been cancelled and the club is not allowed to practice. Whether practices are to resume and games are to be played in the winter, all depends on safety guidelines. This is a big blow to the team, but although they cannot meet in person, they are trying to find ways to get new players involved. They currently hold film sessions twice a week over Zoom, showing the basics of rugby, as well as getting new players up to speed about the game. With everything being brought to a halt, the county’s recent move to the “red tier” has given them hope that maybe some in-person activities with strict guidelines can be held in the near future.

“We’re trying to push for conditioning workouts without equipment,” O’Brien said. “[Obviously] be socially distanced, follow all of the guidelines. But still, meet in person and we can all see each other. I think that’s how you get the most out of club sports.”

Taking this year out of the picture due to the circumstances, the club has grown tremendously over the years. As they continue to gain more experience at the highest level and develop, they hope that one day this program can reach new heights with support from the Davis community and build a base to improve the club for the seasons to come.

“The level of interest and knowledge about rugby is something to get up,” O’Brien said. “It’s a wonderful game. I just want to build that community around the sport and build the amount of guys we can get involved to experience it. To build our club, we need people. To build a good base about recruitment and knowledge of the game is one of our main goals.”

Support from the community can help the team in the future, Naumburg said.

“Just them knowing about UC Davis rugby [can help],” Naumburg said. “I feel like a lot of people don’t know about our schedule in general, so getting more people there at our games would be awesome as well as [seeing improvement] in five to 10 years when I come back to visit. [..] the equipment they get to use, the coaching staff, lifting with the DI trainers is the improvement we want to see overall.”