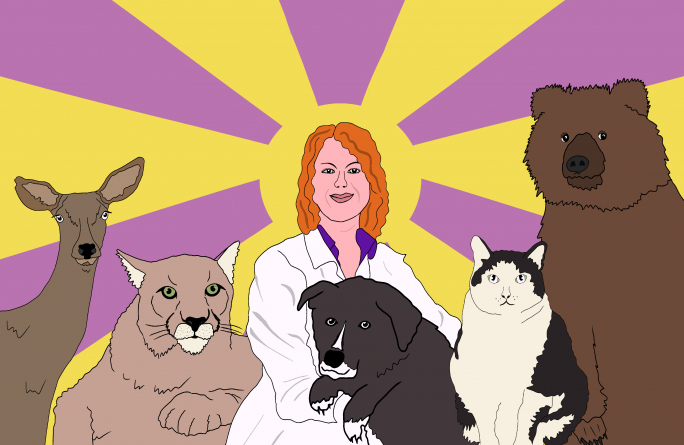 During the devastating and premature wildfire season this summer, one group of fire victims often went overlooked—wildlife mammals. One organization, The Wildlife Disaster Network, is using veterinary expertise and other resources to address the medical concerns of wildlife impacted by fires.

The Wildlife Disaster Network—a partnership between the UC Davis School of Veterinary Medicine and the California Department of Fish and Wildlife (CDFW)—has a design similar to another partnership between CDFW and the UC Davis School of Veterinary Medicine: the Oiled Wildlife Care Network. Both of these partnerships combine the resources of the state government as well as the expertise of veterinarians and academics to aid animals in need. The CDFW provides resources including a physical facility in Rancho Cordova to hold large animals during an extended treatment, a wide network of employees throughout the state of California to respond to emergency calls and the legal authority to collect, hold and provide treatment to the animals.

Prior to the founding of the Wildlife Disaster Network, the CDFW had largely been able to deal with most wildlife victims of fire on a per-case basis. There were few cases of burned animals being taken in, such as Tahoe’s L’il Smokey in 2008. It soon became clear, however, that these cases weren’t going to be quite as infrequent anymore. Kirsten Macintyre, the communications manager for CDFW, explained how the CDFW entered into the partnership with the UC Davis School of Veterinary Medicine.

“It became evident that these cases were no longer ‘one-off’ situations, and a formal, coordinated response would be necessary if we were going to be able to manage the continuing trend of having more than one injured bear or mountain lion in our care at once,” Macintyre said via email.

The UC Davis side of the partnership is led by Dr. Jamie Peyton, chief of the Integrative Medicine Service with the UC Davis Veterinary Medical Teaching Hospital. In 2017, Peyton worked on an innovative burn treatment for wildlife animals—a fish scale biological bandage. The fish scales are a sustainable byproduct: safe for animals to eat should they take it off, while also providing pain relief and protection for burn wounds.

With wildfires becoming more frequent in California, the Wildlife Disaster Network has been taking steps to refine response protocol. The network has worked with first responders to set up a Wildlife Disaster Hotline for reporting injured animals. Through this hotline, they’ve been able to gather information on the impact of disasters on species and their habitats and provide burn protocol to wildlife rehabilitation centers such as the Oakland Zoo on how to assist the network when an emergency arises.

“We’ve been working with biologists throughout the state to prepare them for the possibility of deployment to seek out and retrieve injured wildlife, if and when we receive a report of an injured animal,” Macintyre said via email.

There are still many challenges for the network to sort out and work through, such as making sure that the public is aware of the Wildlife Disaster Network and the work they do. Additionally, because the network also works in disaster areas, once the network gets word of an injured animal, it can be challenging to track and find these animals.

“Finally, one of the most challenging issues for wildlife in disasters is finding the best habitat to release them since large areas are often destroyed in wildfires,” Peyton said via email. “Together as a team with veterinarians, biologists, wildlife carers and the public, we can help ensure that our wildlife has a chance to survive these disasters.”

The work that the veterinarians, biologists and wildlife experts do in these disaster zones is grueling, but rewarding. During the North Complex Fire this summer, the Wildlife Disaster network received a call from their hotline from a passerby about an injured bear cub. A team of veterinarians and a CDFW biologist drove to the area where the cub was sighted. Following the bear tracks, they found the cub with severe burns to his face and unable to walk.

“Seeing his severe injuries, I was so proud that we were able to find him and help him as part of the WDN,” Peyton said via email. “He was an example of why this network is so important and the vital need to include our wildlife in disaster planning to ensure they do not suffer.”

The Wildlife Disaster Network is focused on expanding and growing so that they can serve as a resource for all wildlife in need, especially in disaster areas. The program is largely funded through donations from the public as it continues education and training programs across the state and works to develop treatment for the animals.

“The assistance of UC Davis staff – Dr. Jamie Peyton and her team, in particular – has been, and continues to be, key in making the Wildlife Disaster Network work,” Macintyre said via email. “Neither CDFW nor UC Davis has the staff or resources to provide treatment to these animals alone, but combined, this team of professionals is phenomenal.”