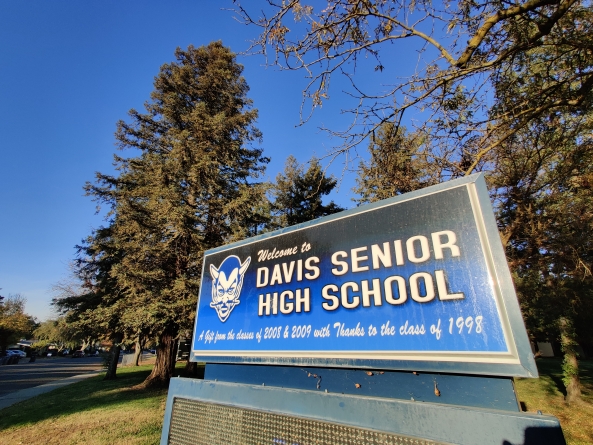 Photo Credits: Justin Han / Aggie. Davis Senior High School is one of many schools in Davis that switched to online learning in response to the COVID-19 pandemic.

According to educators, during this period of online learning teachers are “not able to serve every student,” like education should

Most school districts, including the Davis Joint Unified School District (DJUSD), have been online since the pandemic broke out in March, entering unknown territory for both students and teachers. This posed challenges and caused teachers at all levels to adopt new teaching styles, but has been especially challenging for teachers of elementary and secondary-aged children. Now, almost eight months later, the district plans to remain online through the end of January, though the format of education in the future is largely unknown. There is much debate in the community over the quality of online education and whether it is worth the risk to send students—and educators—back to campuses.

Jessica Beckinger, a kindergarten and first grade teacher at Birch Lane Elementary, expressed the difficulty that she and her colleagues had when they first began to move their Montessori classroom online in March.

“Montessori is a very hands-on philosophy, especially with the very young grade levels, so that has been a challenge,” Beckinger said. “Some of the ways we have been tackling that is to work as a kindergarten and first grade team. There are five of us at that grade level so we’ve each taken a few subjects and we’re creating video lessons in our subjects each week and sending them out to all the students.”

Montessori has a play-based learning style and it relies heavily on students’ movement throughout the classroom, interaction with peers and teachers as well as play with specific materials. Beckinger said that this style of education has been hard to transition to Zoom, but dividing the work and making paper Montessori materials to send to the kids’ homes has been helpful.

She said that though she and her colleagues are finally in a routine with online learning, the hours required are longer than when she was able to teach in person. Though her hours are usually from 8 a.m.-3:30 p.m., Beckinger said that she is usually at school until 5 or 6 p.m. each night.

“It’s more work because there’s less room for improvising,” Eberle said. “It feels like it needs to be a lot tighter, a lot more prepared, because I can’t just write something on the board and expect everybody to write it in their notes. I need a digital copy or a way for students to turn it in. It all needs a level of detail that is different than before.”

In addition to the extra work that online learning has created for educators, it has also made connecting with students difficult. Beckinger said that forming virtual relationships with young students has been particularly challenging.

“When we went to distance learning in the spring, we’d already had most of the school year to build relationships with our students,” Beckinger said. “When they saw our faces on the screen, they could connect them to an actual human being who they knew. This year, we started with a whole new group of kindergarteners, most of whom we have not met in person, so they have no connection to us in the real world. We’re not the ones they love or want to work for.”

One way that she has been trying to reach out to new students is by offering families socially-distanced meetings outside her classroom. The family will come and sit in lawn chairs six feet apart with their masks on and get to know Beckinger, which helps the students be more receptive to her on Zoom.

Another challenge online learning has exposed is the discrepancies between students’ home situations and the impact this could have on their ability to learn. Beckinger explained that she has some families who do not speak any English, and while usually five-year-olds would be able to pick up the language in person, they are having a difficult time over Zoom. Another of her students is on the autism spectrum and has sensory issues with screens, which means the student’s mom has had to watch all of the lessons and re-teach them to her child without the us of screens.

Eberle said that she is experiencing similar problems with her middle schoolers.

“There are 30-40 brand new students to Emerson,” Eberle said. “How do they make friends with students who have been in the same classes since kindergarten or pre-k? And, there are kids who I can’t stop from multitasking. They turn off their video and I can’t stand over them […] it’s hard to see where their problems are and solve them, that takes more time.”

Online learning has also impacted teachers’ home lives. Beckinger has two young children and a husband who works out of the house, so she explained that she has had to juggle teaching and caring for her children while at home.

“[In March], I had to teach from home and my daughter’s preschool had stopped, so I had the kids 24/7 with no childcare because no one would come because COVID had just started,” Beckinger said. “Managing a four-year-old, one-year-old and teaching online with no help, no breaks, is a lot of burden.”

Now, in November, the idea of returning to campus has become a heavily-debated issue nationwide. Despite the challenges of Zoom and the impact of online learning on education, educators have major concerns about the safety and logistics of returning to school.

Though Beckinger understands the struggle of having kids in online learning, she has reservations about teaching in person.

“I am very opposed to a hybrid model,” Beckinger said. “It’s essentially doing two jobs for the pay of one job. Teaching online right now is a full-time job plus, so if I had to teach in person, plus do all of these asynchronous lessons on top of that, that’s really doing two jobs.”

Eberle added that she does not understand how she would be able to manage the Zoom chat room, set up breakout rooms, set up in-person small groups, manage in-person classroom chatter and stay six feet away from students all at the same time.

In addition to these logistical concerns, both Eberle and Beckinger have personal safety concerns about returning to the brick-and-mortar classroom.

“[Returning is] so frightening,” Eberle said. “I have diabetes so I am a vulnerable population. I know that it’s good for the kids to go back and be social in-person, but I also know that parents send their kids to school with fevers and sniffles.”

Eberle expressed that there are classrooms in the district with windows that do not open and air filters that are not very efficient.

“They’re really not thinking of the safety of the educators at all,” Beckinger said. “Some of us live with older parents. I have a co-worker with a young daughter with an auto-immune disease. […] There are a lot of us who have safety concerns for ourselves or our families and our safety is not being taken into account.”

At the end of the day, Beckinger believes that the debate over returning to campus is clear: Until adequate standards are met, classes should remain online.

“It’s either safe to return or it isn’t, there’s really no in-between, and I’m not sure why we’re trying to make there be one,” Beckinger said. “I think there’s a lot of pressure from parents who are over this situation and want their childcare back, but we aren’t babysitters, we’re educators.”Written by: Katie DeBenedetti — features@theaggie.org