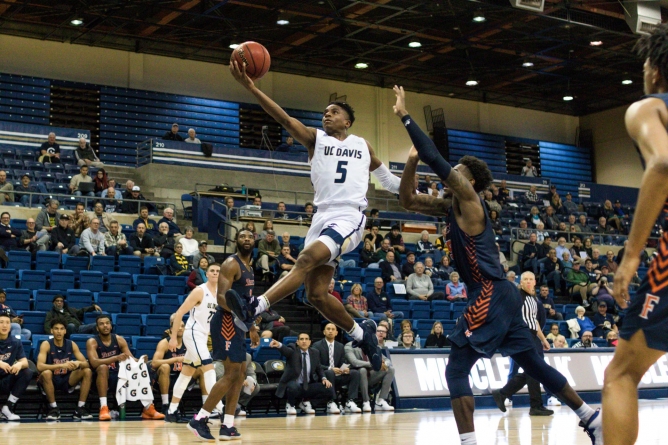 Photo Credits: Benjamin Cheng / Aggie. UC Davis guard Ezra manjon (5,middle) goes up for a layup during a home game against Cal State Fullerton at the Pavilion on January 22, 2020.

As last regular season came to a conclusion back in early March, the UC Davis men’s basketball team traveled to Anaheim, Calif. in preparation for the Big West Conference Tournament. With four seniors on the squad, the team hoped to give them a farewell by winning their first tournament since 2016, and clinching a spot in the NCAA March Madness tournament. Due to the COVID-19 virus, the conference announced that the tournament would be held without fans in attendance as a precautionary measure to prevent the spread. Still, teams traveled to Anaheim, not knowing what would happen or even if they would be able to play. Nevertheless, all indications from the conference and the NCAA suggested that it would go on as followed, until March 11.

On that fateful afternoon, the Utah Jazz’s all-star center Rudy Gobert tested positive for COVID-19, sending the NBA, and eventually the sports world, into a panic. The suspension of the NBA season led to the suspension and cancellation of many other sporting events. Gobert’s results ultimately led to the cancellation of the Big West Tournament, and the NCAA Tournament as a whole.

“That might be as emotional a locker room as I’ve ever been in,” said Jim Les, UC Davis men’s basketball head coach, in regards to the news of the tournament being canceled. “We had a group of young players that were playing a lot and freshmen that had never been to the tournament or played in the Honda Center. It was really emotional for our guys and I felt horrible for them, but ultimately it was the right decision.”

This sentiment was felt throughout the country, as many seniors saw their college careers dashed from one day to the next.

“When reality set in, it was an upsetting and disappointing feeling,” said now senior transfer Kennedy Koehler. “The more impactful feeling though was not being able to take the floor again with our four seniors. It was a real bummer to see their college careers end that way.”

Fast forward to the present day, the Aggies are preparing for their long-awaited return on Nov. 25. What was primarily a long off-season of individual training, the team began preparing for their season on Oct. 14—the first day they were allowed to practice. Having not been able to gather physically as a team for seven months, the return has brought the team together as they prepare for the new and unique season.

Coming into this season, the health and safety of everyone involved will be a top priority. The team is tested once a week and masks are mandatory at all times. The practice facility is sanitized constantly, and they try not to let anyone aside from their teammates in their proximity, out of caution. The season will begin with no spectators in attendance, but this mandate may be revisited at many points during the season.

The Aggies’ non-conference schedule had to be reworked completely, according to Coach Les. The team tried to limit games strictly to the state of California, meaning they had to cancel games in Louisiana, New Mexico and Oregon among others. Their schedule will now begin on Nov. 25 in Santa Clara, Calif. where they will play three games over four days. The games are against Nicholls State, Idaho State and the host, Santa Clara University. Their home opener will be on Dec. 5 against the University of Portland, a team they lost to by 10 points last year. The Aggies will then go on a three-game road trip against Cal Baptist, Pacific and their Causeway rivals, Sacramento State. In their final non-conference tune-up, they will face William Jessup at The Pavillion on Dec. 22.

In a normal Big West Conference season, teams would play each team once in a home-and-home series. Due to the nature of this season, and in order to reduce travel, the conference modified this regular season, making the teams face the same opponent on consecutive days.

“From a player and coach standpoint, it’s almost like a playoff series,” Coach Les said. “You’re playing back-to-back games against the same personnel, same opponent, same system. I think your ability to adjust and adapt from one night to the next is going to be crucial to having success under the new format.”

Aside from the first week of conference play, these other 18 conference games will be held from Friday to Saturday with a bye week in between.

The Aggies open the conference slate against newly-added Cal State Bakersfield in Bakersfield, Calif. On Dec. 27-28. They then go back home to host UC Riverside in their Big West opener on Jan. 1-2. From there, they play in Irvine against the defending Big West Champions on Jan. 8-9, in Davis against Cal State Fullerton on Jan. 15-16, at UC San Diego  on Jan. 22-23, at The Pavilion vs UC Santa Barbara on Jan. 29-30, in Northridge against CSUN on Feb. 5-6 and back home against Long Beach State on Feb. 12-13. They have their bye week following the games against Long Beach State, having played seven straight weeks of conference play. To finish off the season, they travel to San Luis Obispo to take on Cal Poly on Feb. 26-27, before closing out the season in Davis against Hawai’i on March 5-6.

The losses of major senior presences Joe Mooney, Stefan Gonzalez, Rogers Printup and Matt Neufield will be something this young team will try to fill. Still, their solid core of players like Ezra Manjon, Kennedy Koehler, Elijah Pepper, Caleb Fuller, Damion Squire and many others will have to take another step forward in their progression if UC Davis wants to compete in the Big West Conference.

“I’m really excited about this team,” Coach Les said. “While they were all at home, I thought they really worked to get better. Despite the pandemic, we challenged them to come back here better. What I love about this team is that they have a great energy and competitive spirit about themselves. Our practices have been high intensity and these guys can’t wait to get back out on the floor.”

Welcoming six new members to the team, they hope to find other players to come in and compete right away, similar to what they had last year.

“There’s a lot of new pieces added, so I think the learning curve came pretty quick,” Koehler said. “But, we’re getting better and better each day. If we can play hard and be disciplined on the defensive end, I think we’ll have a lot of fun on offense and success overall. I’m really excited about this group. We got a lot of guys that can do a lot of different things.”

After finishing fifth in the conference last year with a record of 8-8, UC Davis was picked by the media to finish third this upcoming season. With sophomore Manjon also picking up a Preseason All-Conference Team selection, the Aggies are predicted to do well this season and possibly find their way back into competing for another Big West title. A lot is predicated on the surrounding cast, but another stellar season by Manjon can be enough to catapult the team into contention.

The crushing way last season ended and the long, uncertain offseason the team endured proved worth it to this point, as they stand closer to a return to the hardwood. High spirits surround the team, as they believe what they have is enough to get them back into the Big Dance.

“The sky’s the limit,” Coach Les said. “We’ve got a lot of guys who logged a lot of important minutes for us last year. I like our returning guys and we added a lot of really good depth and size to our roster; that’s going to give us a chance to compete at a high level.”