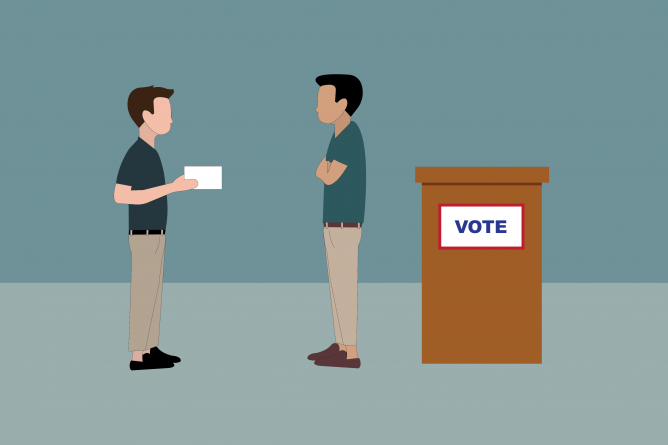 The Yolo County District Attorney’s Office is currently investigating a case of voter suppression, according to an article from KRCA.

“Federal law says that ‘no person … shall intimidate, threaten, coerce … any other person for the purpose of interfering with the right of [that] person to vote or to vote as he may choose’,” a document from the American Civil Liberties Union reads. “Many states have their own laws prohibiting voter intimidation.”

A note was left on a voter’s door discouraging them from voting, according to a statement issued by the Yolo County District Attorney on Facebook.

The voter, however, “[…] is an eligible voter and was shocked by this hostile voter suppression effort,” according to the Facebook post.

Isaac Hale, a UC Davis political science lecturer, explained via email that there is a long history of voter intimidation in the U.S.

“In school, we learn about Jim Crow lynching, and cross-burnings,” Hale said via email. “But voter suppression didn’t end after the Civil Rights Movement. In 1981, New Jersey Republicans and the RNC sent out tens of thousands of letters to primarily black and latino voters warning them that violating election laws is a crime and that the polls would be patrolled by the ‘National Ballot Security Task Force.’”

In the past few years, voter intimidation has moved to the government level, “with state legislatures around the country imposing rules making it very difficult to vote in the name of preventing voter fraud,” Hale said via email.

For example, after the Shelby County v. Holder Supreme Court case in 2013 invalidated some parts of the Voting Rights Act, one in five polling locations in Arizona and Georgia were shuttered, Hale explained.

“There is no good-government rationale for these activities, especially given the gargantuan lines to vote since we’ve seen in these states since that ruling,” Hale said via email. “Voter suppression comes in many forms, from personal threats to government policy.”

Hale explained that there are measures that can be taken to help combat voter intimidation, including challenging the idea of widespread voter fraud.

“Statistically, voter fraud does not exist,” Hale said via email. “However, many prominent Republican politicians, including the president, have insisted without evidence that rampant voter fraud exists. These kinds of false claims fuel individuals’ beliefs about voter fraud and the legitimacy of election outcomes.”

Another important solution is making “American politics less zero-sum,” according to Hale via email. The winner-take-all approach in the presidential and congressional elections leads to different parties perceiving their opponents as threats. Hale explained that reforms such as ranked-choice or proportional representation can help reduce this problem.

Evidence does not decisively support the idea that restrictions and voter intimidation have a large impact on voter turnout, according to Hale.

“There is only mixed evidence that sweeping restrictions like voter ID substantially decrease turnout,” Hale said via email. “I would be skeptical that isolated interpersonal incidents of voter intimidation that don’t get significant press have a large impact on the outcome of elections. However, there is a wide consensus that good government reforms like universal vote-by-mail and automatic voter registration increase voter participation.”
Written by: Shraddha Jhingan — city@theaggie.org