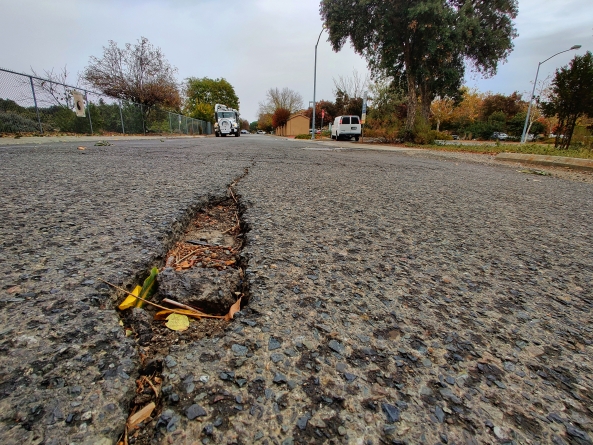 The Davis City Council has approved a plan to fix the city’s bike paths and roads. Davis roads are some of the worst in the region, with a pavement condition index of 57, lower than every city in the region and the statewide average of 65.A subcommittee formed in January by Davis Mayor Gloria Partida and Councilman Dan Carson created the plan.

The roads are in poor shape partly because of funding issues. Whereas applying a new coat of asphalt to a road is fairly simple and inexpensive, it is much more expensive to fix roads which have deteriorated to the point of requiring reconstruction, according to Carson.

In addition, Carson explained that Davis has a large quantity of roads and bike paths: 166 miles of roads and 52 miles of bike and shared-use paths have been identified for rehabilitation.

“Not all local jurisdictions have the extensive network of bike paths that we do,” Carson said.

Carson explained that the subcommittee focused a great deal of attention on reducing the costs of the project.

“The price tag we saw in January was a bit of a stunner, of $118 million over 10 years,” Carson said. “The original estimates had assumed that all bike path repair work in the city would be done using a material called portland cement. Trying to do all the work that way meant very little work got done, but the rest of the bike paths deteriorated, and as they deteriorated, the costs of their repair would go up immensely.”

Changing the plan to use portland cement on a more targeted basis brought the total bill for the project down to $84 million. The city had already budgeted $53 million to do the work, and the subcommittee cobbled together the $31 million funding gap from various other unused areas of the budget, including $12.1 million from the General Fund, which comes mainly from sales taxes, motel taxes, property taxes and business license fees.

A city of Davis staff report explains that although the road reconstruction project exceeded its budget, it won’t have adverse long-term effects on other city programs.

“No currently budgeted program or infrastructure project would lose funding because of the adoption of this plan,” the staff report reads. “The ramp-up of road and bike path rehabilitation work would still allow other important transportation infrastructure and repair projects to proceed, although this reprioritization of funding could slow the funding of new programs or projects.”

A key part of funding the new project comes from increasing economic development in Davis, although a large amount of the funds are already available. To some extent, the pace of the project depends on when the current recession ends. The budgeting constraints of the project add “real accountability and transparency” to the project, as the city budget and finance commission will be monitoring its progress, according to Carson.

“We’ve put together a plan that will put the city of Davis on the right track to significantly improve the condition of our roads and bike paths,” Carson said. “It won’t happen overnight, but this plan allows for steady progress to meet the goals of the city council.”

When informed about the poor condition of the roads in Davis, Jeffrey Nichols, a UC Davis third-year mathematics PhD student, expressed surprise.

“Davis roads, from a cyclist perspective, definitely seem above average, having lived in Texas and Colorado before California,” Nichols said.

Nichols stated that the cyclist culture in Davis is one thing that does not need to be fixed.

“It’s important to maintain the roads; that’s obviously necessary, but whatever it is that Davis did to create this bike-friendly culture, they definitely need to make sure that it keeps happening,” Nichols said. “It’s awesome.”
Written by: Rachel Shey — city@theaggie.org