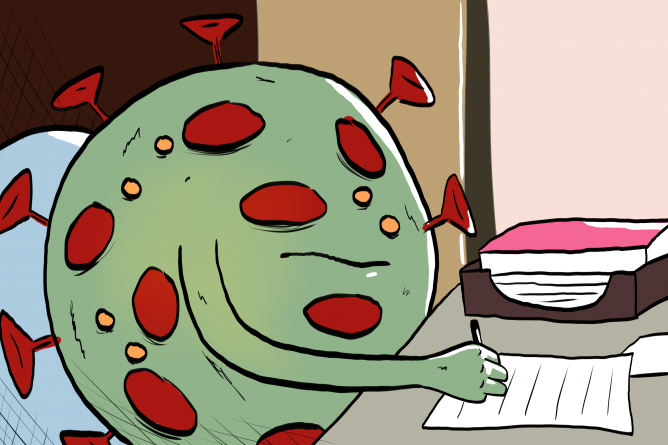 I missed you so, so much America

Hello, my little American mortals. It’s me, Miss C. Rona. The virus formerly known for causing COVID-19. You used to be terrified of me, remember?

It’s been a few weeks since we’ve chatted, I know. I’ve been busy, not that you care. I’ve had to make a few appearances here and there. All over the planet. It’s no big deal. I got a haircut, a new publicist and a lot of press coverage. Doing my thing, chasing my bag. I’m thinking of making a TikTok account. The life of an international superstar is just exhausting.

Anyway, I’m saying all of this to let you know that I’m actually kinda mad at you right now. Like… how could you just forget about me? Did you really think you could just go around opening the country all willy nilly without thinking of me?! I thought we had something here. Something real. You used to Google me and my location, and now? Now you’re obsessed with those face masks. Ugh. You do realize that they’re trying to keep us apart, right?

I won’t get into what we had, but I can fill you in on what I’ve done since we last spoke. For one, I took care of that stupid president of yours. He had the nerve to tell the American public that I’m just going to “go away.” So I infected his ass, just to prove him and all of his little friends wrong. It was a little gross, but I did what I had to do. I do not play games and he shouldn’t have tried to doubt me.

America, I told myself I wouldn’t come crawling back, but I decided that I have to be vulnerable about my feelings. You’re all I have. Seriously. The rest of the world has moved on to new things, like “progress” and “climate change.” They “took care of me.” They might be laughing at our relationship, but we don’t have to pay attention to them. You’ve been dropping little hints that you still want me all year: the lack of masks, the lack of social distancing, the college ragers. I know you still want me around. And I’m eternally grateful for that.

Here’s my plan for the rest of the year.

With the way things are going now, I’m thinking we can infect the Thanksgiving turkeys, stuffing and cranberry sauce. I’ve got cat-like reflexes, so I can dodge a turkey baster in the oven––no problem.

Then, I’ll move on to Christmas. Santa’s old. He’ll be easy to take care of.

And then, New Year’s! I was originally planning to shoot myself out of a firework but, given the time constraints and some crap I’m getting from Pfizer and Moderna, I can probably just hang out on your lips until you kiss your mom at midnight.

And I can’t do any of this without your help. Just stop wearing those pesky masks and instead, breathe all over each other. Practice some throat singing with a circle of friends. Do a little spit shake with one of your homies. It’s just me and you against the world now, America. Let’s spread some holiday cheer.