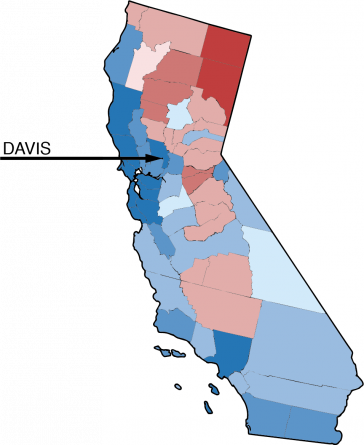 In the wake of a divisive election, many believe that “political bubbles,” or being surrounded by one’s own beliefs, are more frequently occuring, including in college towns. Evan Cragin, a fourth-year political science major and the executive director of the Davis College Democrats (DCD), said that he believes Davis is a political bubble.

“Davis is a very politically-left college city in the Central Valley,” Cragin said. “Especially when you consider outside of the Sacramento-direct region, it’s a very conservative part of California. Davis is a college town, it’s very educated and high-income, […] but it’s very much its own little bubble that does not represent a lot of the areas it surrounds.”

For some students in Davis, like Lauren Remish, a second-year psychology and cognitive science double major, this was shocking.

“The people I surround myself with and people I encounter on a daily basis are all very like-minded, and even in my classes, teachers will make fun of Trump,” Remish said. “It was crazy to see that that’s not the case everywhere you go.”

Because Davis tends to be left-leaning overall, some students shared that they were surprised by the experiences they’ve had in neighboring towns. Cragin said that working on a campaign in the Central Valley was eye-opening.

“I worked on a county supervisor race in Woodland, which is the city directly North of Davis, and at one point we were canvassing and we got into the West side of the city,” Cragin said. “It was very clearly very Republican and we got yelled at and doors slammed in our faces several times. It was very intimidating that even though Yolo County as a whole is very blue, there are still [cities] that are conservative.”

Other students had a similar experience working the polls on Nov. 3. Jackie Davis, a second-year international relations and communications double major, said that she was surprised by the demographic she encountered in Dixon.

“What shocked me the most is that [Dixon] is literally 20 minutes away,” Davis said. “You have Davis which is very liberal and you go 15 minutes down the road and you have the complete opposite.”

Emma Talbot, a second-year sustainable agriculture major and women’s studies minor, was also surprised by the experience working at a polling station.

“It was crazy that people would come into the polls and I would tell them to go to the secrecy place to fill out their ballots, but they couldn’t care less about if anyone saw what they were putting so they would just fill it out on our desk,” Talbot said. “I think that speaks a lot to that no matter where you live, you try to surround yourself with people of a similar belief […] Everyone kinda lives in their own political bubble, like we do in Davis.”

Talbot expressed that seeing the contrast between the two towns on election day made her consider the potential costs of being in a political bubble.

“I think it’s really dangerous to live in a political bubble because you develop a mob mentality a little bit,” Talbot said. “It’s dangerous because you so firmly believe that you are right and everything you believe in is true.”

Though political bubbles can have polarizing effects and lead to tense situations, Karan Brar, a fourth-year managerial economics major and the chair of the Davis College Republicans (DCR), said that members of the Davis community on both sides of the political aisle are able to effectively cooperate.

“I’d say that it’s not like Davis is as extreme as some people might expect out of a California university,” Brar said. “A lot of the left-wing people here are moderates and we’ve had good conversations, we’ve worked together. Davis College Republicans and Democrats have collaborated on local issues together.”

Brar stated that he believes that a diverse community facilitates better conversation and stronger beliefs on both sides.

“It’s very beneficial […] being exposed to people with different beliefs,” Brar said. “Either we change our beliefs to be more correct […] or you can find new ways to defend your own beliefs. If you see both sides of the issue, you might not change your belief, but at least you have a new counter argument against your own belief.”Written by: Katie DeBenedetti — features@theaggie.org