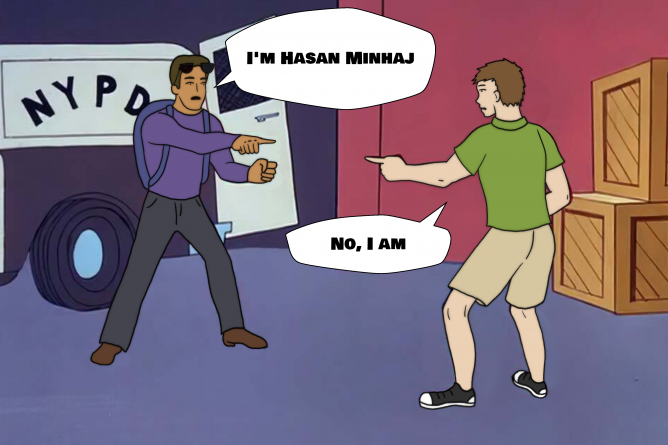 “You want to do stand-up comedy?” a classmate asked third-year student Monica Flowers, incredulously. “Who do you think you are, Hasan Minhaj?

Flowers froze. She never thought to compare herself to Minhaj, a UC Davis alumnus with a Netflix show and two Peabody awards. But the comparison did make sense. Out of the 35,000 students at Davis, one of them had to be the next Hasan Minhaj. By sheer virtue of attending the same school as Minhaj, Flowers believed that the path to comedic success did not need to be carved out––she just had to retrace his steps.

“You know what? I think I am,” Flowers responded, nodding vigorously.

Although this phenomenon has remained dormant for a while, the Hasan Minhaj Effect has experienced a resurgence following the wrongful Netflix cancellation of Patriot Act. Stand-up comedy has never been more alive in Davis, with sales of bomber jackets and UCSC jabs more alive than ever.

“Dude, if I wanted a Netflix show, I got it!” first-year student Andrei Irving said. “I’ll just tell these producers that me and Hasan have that Aggie connection, you know?”

Flowers walks mid-way into a stand-up comedy open call. A college student with perfectly coiffed hair, skinny jeans and a bomber jacket is in the middle of performing his set. In the background, the theme song of Patriot Act hums softly.

“And that’s what it’s like, being a brown dude in America, man!” the student finishes, gesticulating.

“Brian… I’m sorry, did you say brown dude in America?” the judge asks.

“Yeah, I don’t know if you know this, but a big part of Hasan’s routine is his Indian culture,” Brian said.

“But you’re not Hasan,” the judge points out.

“But I want to be,” Brian says, shrugging his shoulders.

“I think we all want to be Hasan, but not all of us can be,” the judge reemphasizes.

“I just have a hard time believing you were made fun of for having an ethnic name, Brian, as you suggest in your routine,” the judge said.

Next to Flowers, a guy nudges her and asks: “Check this guy out, who does he think he is, the next Hasan Minhaj?”

“Tell me about it,” Flowers agrees. “Why does everybody think they can be the next Hasan Minhaj?”