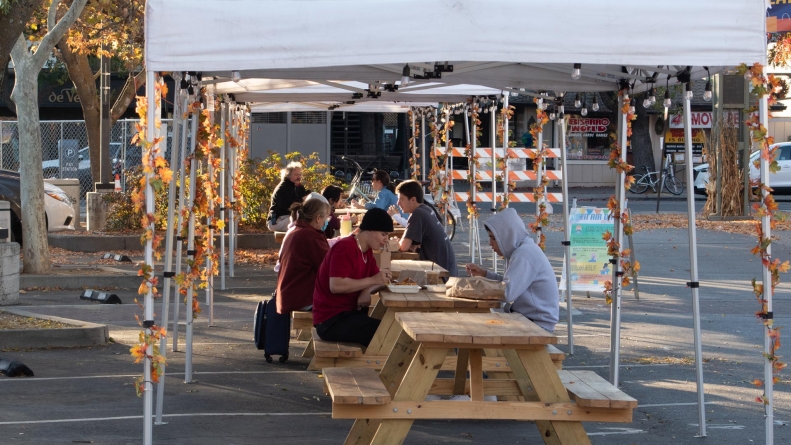 Yolo County announced in a press release published on Nov. 16 that it would be moving to the purple tier, following an increase in positive cases of COVID-19. As of Nov. 16, the adjusted case rate for Yolo County was 17.4, which is much higher than the threshold of 7.0 for the purple tier.

Due to the move to the purple tier, local businesses will now have to cease indoor activities or operate at limited capacity. For example, restaurants, gyms, movie theaters, zoos and museums can operate “outdoors only with modifications,” according to the press release.

The move to the purple tier has taken an additional toll on businesses, alongside the decrease in business caused by the pandemic, according to Executive Director of Davis Downtown Brett Maresca via email.

“[The move to the Purple Tier] has hit restaurants, bars, and workout/gym facilities the hardest,” Maresca said via email. “No seating is allowed inside for eating or drinking, and no indoor services can be provided for gyms or workout studios. It overall puts a damper on at least the perception of safety of all business conducted indoors as well, which in turn hurts commerce in other business sectors.”

Maresca also noted that while the return of students to Davis in the fall has been helpful, there haven’t been as many students as previous years, which has been difficult for businesses.

“A lot of our downtown businesses survive off of the student population, and struggle just to break even during the summers and winter/spring breaks when they are not present,” Maresca said via email. “This year has been extremely difficult without the students here.”

Owner of Mishka’s Café, Sinisa Novakovic, explained the repercussions of the move to the purple tier on business operations.

“Purple tier for us really means that we cannot have anybody inside, and customers [buy] drinks and pastries either to-go or sit outside,” Novakovic said.

Novakovic also noted that while business improved by around 20% when more students returned in the fall, it has still remained low, decreasing the number of employees working each shift.

“We really only have—for the most part—two, sometimes three people working per shift because there are far fewer people coming out,” Novakovic said.

Some furniture also had to be removed to allow for social distancing, alongside other precautionary measures such as having hand-sanitizer available and not serving from customers’ reusable ceramic mugs or to-go containers.

Public Information Officer for Yolo County Jenny Tan explained via email her concerns with the potential of people gathering during the upcoming holiday season, which could potentially lead to a spike in cases.

“I worry about our numbers increasing when they are already quite high,” Tan said via email. “We all need to sacrifice a little bit this year, by not gathering or traveling this holiday season.”

Maresca underscored the importance of continuing to support local businesses, especially in this time when business has taken a downturn.

“Please support your local businesses!” Maresca said via email. “Without student patronage, more businesses will be disappearing and there will be less to do and shop for in-person in our community! Instead of shopping online for this holiday season, please visit downtown and support the businesses that are here for you.”

Ways to support local businesses include participating in Shop Small Saturday with the Farmers Market, attending music and activities in E Street Plaza, a raffle and more, according to Maresca. More information can be found on Davis Downtown’s website.

Tan also noted that alongside buying from local businesses and ordering from restaurants, students can volunteer at nonprofit organizations and donate food.

Despite the detrimental effects of COVID-19 on business, Novakovic highlighted that residents of Davis have been “incredibly supportive.”

“It’s been a pleasure trying to stay open in spite of all the difficulties, but what made it much easier is the fact that our regular customers showed their support by showing up and by generously tipping our employees,” Novakovic said.