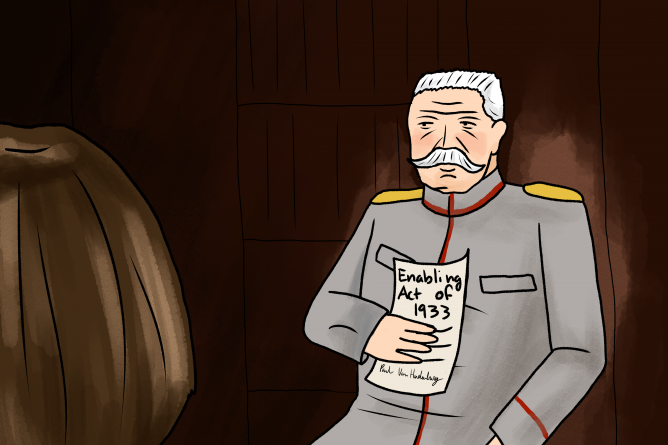 In the weeks after the 2020 election, an unnamed senior GOP official made the following statement regarding the Republican Party’s willingness to entertain President Donald Trump’s baseless, unsubstantiated, evidence-free claims of voter fraud and support his laughable, ludicrous lawsuits:

“What is the downside for humoring him for this little bit of time? No one seriously thinks the results will change. He went golfing this weekend. It’s not like he’s plotting how to prevent Joe Biden from taking power on Jan. 20. He’s tweeting about filing some lawsuits, those lawsuits will fail, then he’ll tweet some more about how the election was stolen, and then he’ll leave.”

We at The Aggie were quite alarmed to hear someone with influence in the GOP demonstrate such a blasé attitude toward Trump’s blatant attempts to subvert democracy and overturn a free and fair election, inept as those attempts have proved to be. So, what is the harm in “humoring” Trump? Perhaps there is none. That’s certainly possible. But there’s no way for us to know that yet, which is why we must be cautious and not take anything for granted.

So, to get a definitive answer to this self-interested and foresight-lacking GOP official’s question, we decided to interview someone with some firsthand experience of what can go wrong in the “humoring him” department: the ghost of Paul von Hindenburg.

It took some time, and some of our connections in the area had to pull a few strings, but we were eventually able to track down at his address in Hell, where reporter R.E. Porter asked him a few questions:

R.E. Porter: Hello, I’m here with former German President Paul von Hindenburg, who infamously appointed Adolf Hitler as Chancellor of Germany, issued the Reichstag Fire Decree abolishing civil liberties and signed the Enabling Act of 1933 giving the chancellor the power to rule by decree, enacting laws without the consent of the Reichstag, which consolidated Hitler’s power as a dictator.

Hindenburg: Yes, I was old and senile at the time so you can’t entirely blame me for that because you can’t yet prove whether I was acting in good faith.

R.E. Porter: Well you know, Paul, it’s actually still debated by historians whether or not you were (1) vulnerable and unwittingly under the outside influence of people like Franz von Papen, your son Oskar and the nineteen prominent leaders German in industry, agriculture and finance who signed the Industrielleneingabe (“industrial petition”) urging you to appoint Hitler as Chancellor of Germany, or (2) whether you in fact appointed him Chancellor of Germany as a cynical political maneuver, cunningly planned and premeditated because you might have sympathized with Hitler’s rhetoric on the problematic concept of Volksgemeinschaft, or “people’s community,” which became a tenet of Nazism.

Hindenburg: Yes exactly, and because of that debate about whether or not I was still mentally coherent enough to know what I was doing, there’s no way for you to actually know right now whether you’re able to trust anything I say. I could just as easily be blabbering about my senile final years of life with an unreliable and biased memory of the events as I could be telling an accurate account of those events.

R.E. Porter: Well don’t you remember receiving a letter from Erich Luddendorff, who had been allies with Hitler since the failed Beer Hall Putsch of 1923, warning you that Hitler was actually much more dangerous than anybody thought possible? Did witnessing someone who had been allies with Hitler until this breaking point sound the alarm to you personally really not make any sort of impression on you at all??? I’ll read what he wrote to you. He said, and I quote, “You have delivered up our holy German Fatherland to one of the greatest demagogues of all time. I solemnly prophesy that this accursed man will cast our Reich into the abyss and bring our nation to inconceivable misery. Future generations will damn you in your grave for what you have done.” Whether you like it or not, you were warned at the time that what you were doing was a grave mistake. That’s a fact. Why didn’t you act or also sound the alarm?

Hindenburg: I can neither confirm nor deny whether I remember ruminating on how to react to that letter, not to mention whether I even remember reading it, because you still don’t know for certain whether I was senile and whether you can trust my ghost if I was senile. And there’s no way for you to know whether people who die when they were old and senile remain old and senile when they become a ghost because you’ve never died and become a ghost before. But regardless of that, you just have to assume that I felt that everything was guaranteed to be under control in a worst case scenario because nobody took Hitler seriously and people like Fritz Thyssen and Franz von Papen thought we were in control of Hitler. It’s even been alleged that socialist politician Kurt Schumacher was dismissive enough towards Hitler to humiliatingly label the future mass-murdering genocidal maniac as nothing more than Dekorationsstück, a “decoration or piece of scenery,” in the new government.

R.E. Porter: Yes, and Kurt Schumacher would soon be forced to spend years in a concentration camp. And the late great writer Christopher Hitchens once referred to Fritz Thyssen as a “greedy and cynical tycoon,” to Franz von Papen as an “establishment wheeler-dealer,” to you as a “senile” and “dense military man” and to all of you collectively as “Hitler’s inventors and backers,” who, like “caricatures out of some Monopoly board game,” naively “imagined they were using him” as an “insurance policy against communism,” when in fact Hitler was using them to rise to power. So do those Monopoly caricatures—like von Papen, who mistakenly claimed “We’ve hired him!” after helping broker the deal that saw you name Hitler as chancellor—remind you at all of the politicians, business interests, lobbyists and media personalities we see continue to capitulate to Trump and to apologetically dismiss concerns about what Trump might do if he knew for certain that everybody would say “yes” to him? Does that reminder concern you? Wouldn’t you say it’s entirely possible that for all we know, the only core difference between Hitler and Trump is that Hitler did know that everybody would say “yes” to him? That they would “humor him,” as they thought of it?

R.E. Porter: Really? By giving him unchecked power, you implicitly gave Hitler the power to merge his power as the chancellor with your power as the president after you died, which is exactly what he did in making himself Führer. You didn’t realize that he could do that and would? And that’s far from the worst thing he did! Are you seriously saying that as a ghost in Hell, you weren’t able to see the horrible things Hitler did in the decade after you died? Due to the fact that you are here in Hell, I think you’d have to know what he did. Because I don’t think that a guy like you—you, Field Marshal von Hindenburg, who had previously been a respected war hero and a candidate against Hitler yet eventually signs the Enabling Act of 1933, regardless of your intentions—winds up in Hell without being informed of every last detail of the evil Hitler wrought on the world as a result of the powers you gave him through his entirely “constitutional” rise to power, Hitler’s constitutional coup. I wouldn’t even be surprised if you just barely squeaked your way Heaven initially, but then got personally dragged down to Hell by Jesus once you both saw what you enabled Hitler to do. So you’re sure you can’t see current events once you’re a ghost? You’re sure you don’t see any eerie parallels between what you experienced what Trump is doing today?

R.E. Porter: Are you sure? Because if you do see any troubling similarities between the events you lived through and the events of today—but simply don’t want to warn us because that would mean you’d risk the reputation hit that would come with admitting you knew more than you let on about the danger of Hitler—then that would prove just how dangerous and evil people like you and Hitler’s other would-be handlers are, showing why people like that shouldn’t ever have power and influence again. Doesn’t that concern you at all, given what we’re seeing now with lots of Republican politicians still failing to criticize Trump’s authoritarian impulses and attempts to subvert the election, justifying themselves by basically saying that the utility of continuing to use him as a populist tool—a Dekorationsstück, if you will—to achieve their policy goals still far outweighs the level of potentially irreparable damage he’s causing to America’s social fabric and democratic institutions?

Hindenburg: I’m unable to say whether there’s any “harm in humoring” this so-called “Trump” because at the time I might have been under the impression that German High Command had circumvented the danger of the Nazi Party by making all soliders swear an “oath of unconditional loyalty” directly to Hitler himself, who High Command thought they could control with that sort of ego-boosting appeasement.

R.E. Porter: Yes exactly. And people today interpret that act of “humoring” Hitler as a horrible, fatal and devastating mistake, proving either that y’all had to have been in on Hitler’s game or that y’all had to have been incredibly naive, selfish and/or senile to think that you were actually confirming Hitler as your “creature” with such a reckless and dangerous oath.

Hindenburg: Before you criticize me, you have to remember that even Winston Churchill thought highly enough about Hitler to include him in his Great Contemporaries.

R.E. Porter: Yes, and Churchill wrote much less favorably about Trotsky, who, unlike Churchill, understood that Hitler would be disastrous for more than just “the German fatherland” because, “today, not only in peasant homes but also in the city sky-scrapers, there lives alongside the twentieth century the tenth or thirteenth. A hundred million people use electricity and still believe in the magic power of signs and exorcisms… What inexhaustible reserves they possess of darkness, ignorance and savagery!” Does this really not remind you at all of religious and QAnon-believing right-wingers in the U.S. today, Paul? Just how closely does history have to rhyme for us to actually hear it if we keep convincing ourselves that we’re safe and free enough to be less careful and more distracted while we listen for those rhymes?

(This article is humor and/or satire, and it’s content is purely fictional. The story and or names of “sources” are fictionalized.)