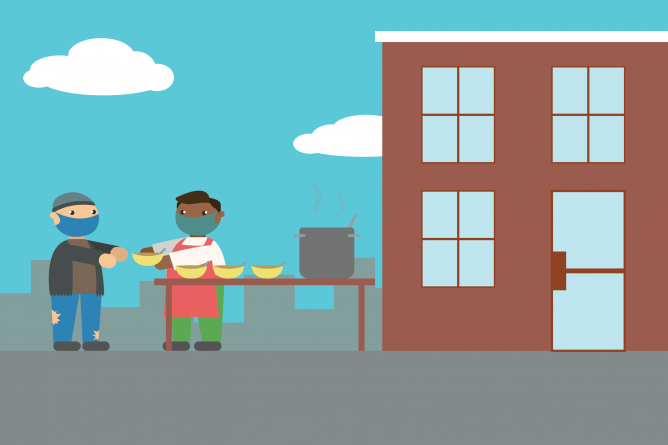 Nonprofits adapted to comply with safety regulations, but they need donations for upcoming holiday season

The COVID-19 pandemic left a significant impact on everyone’s lives, especially on particularly vulnerable groups such as the homeless population. Various organizations in the Davis and Sacramento area such as Sacramento Loaves & Fishes, Davis Community Meals and Housing and Next Move Homeless Services described the various ways the pandemic affected their services and the homeless population as a whole.

Advocacy director of Sacramento Loaves & Fishes Joe Smith explained the occurrence of COVID-19 in the homeless population in Sacramento.

“Here in Sacramento, at least, there’s been very few occurrences of COVID-19 through the population compared to other municipalities,” Smith said. “A lot of other communities had problems with COVID spreading in their shelters. Since Sacramento doesn’t do much to shelter homeless people, there’s been a very low occurrence.”

Davis Community Meals and Housing is a non-profit organization whose purpose “[…] is to provide low-income and homeless individuals and families with housing, food, and human services to help them rebuild their lives,” its official website reads.

Before the pandemic, Smith described the typical services provided by Loaves & Fishes included—but were not limited to—breakfast on weekdays, lunch seven days a week, a day respite center known as Friendship Park, various outreach centers, a mental health counseling center, a legal center and a clinic for basic medical care.

When the pandemic began, Smith further explained how Friendship Park had to close because there was no way to maintain proper social distancing due to the large volume of people that normally used the service. Other services that had to shut down included the outreach offices and the library and volunteer work, while other services were modified to comply with social distancing guidelines when possible.

Pride described the services offered by Davis Community Meals and Housing before the pandemic. These services included—but were not limited to—a full-scale dinner or lunch, a daily resource center open every weekday, a street outreach program, an employment program and transitional housing.

When the pandemic began, Pride explained the changes to Davis Community Meals and Housing.

“Unfortunately, because of COVID, some of the usual things we do are just not going to happen,” Pride said. “We’re still having to modify a lot of what we’re doing to comply with all the health and safety requirements we’re obligated to comply with.”

Smith recommended the best way to help the homeless population.

“The best way to directly make an impact on a personal level for people experiencing homelessness is to support agencies like Loaves and Fishes by donating any jackets, blankets, coats, any kind of warm weather or wet weather gear,” Smith said. “Support the local agencies that are doing the work with the homeless.”

Next Move Homeless Services in Sacramento is an agency that “[…] offers direct services, housing, employment, healthcare, and education to its clients, enabling them to become self-sufficient,” its official website reads.

When the pandemic began, Next Move Homeless Services initially faced difficulty in adapting, according to Abrusci.

“There [were] a bunch of challenges we had to work through,” Abrusci said. “We deal with a lot of people that have pretty severe mental health issues, and not being able to be connected to them in the way that we were previously was a bit of a challenge.”

Pride further described the importance of safety for both staff and homeless individuals.

“I think one of our big concerns is that probably the vast majority of folks we serve are considered highly vulnerable for a whole range of reasons by age or illness or other types of behavior,” Pride said. “We had to have a lot of safety protocols to make sure that my staff and everybody else were kept safe.”

Abrusci added a final message for those wanting to help the homeless population.

“Especially during the holiday season, it seems to be that people focus on wanting to do good or to help,” Abrusci said. “It’s just a reminder that those people experiencing difficulties are experiencing the same difficulties year-round. While we appreciate the extra help during the holiday season, just a reminder that we really can use that support throughout the year.”
Written By: Jelena Lapuz — city@theaggie.org