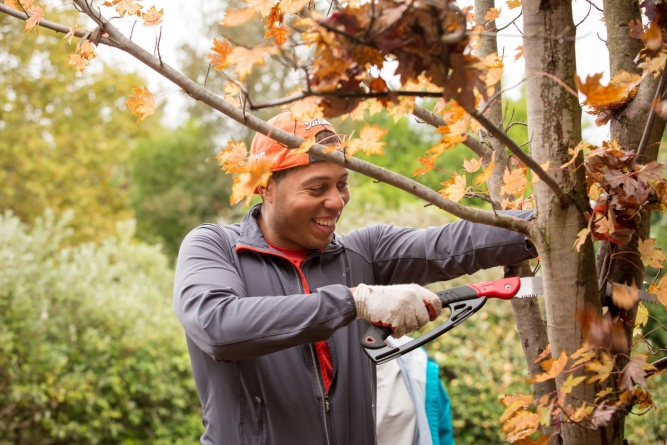 The executive director, board members of Tree Davis detail the environmental and mental health benefits of planting trees

Tree Davis’s mission, stated on their website, is “to enhance and expand our urban forest by teaching the people of our community to plant and care for trees.” Every weekend from October to April before the pandemic, Tree Davis hosted events where volunteers either planted or tended to trees. Groups would convene at the Veterans Memorial Center to receive orientation about the work for the day and join small groups with a Tree Davis team leader. Each group would then be assigned to one area of the city where they would complete tasks.

Now, no more than three households can gather at one time to volunteer for events, creating challenges for the organization’s goals according to Board Member Emily Griswold.

“In the past you could have 20 or 30 people come on a Saturday morning and work for three hours and plant a bunch of trees,” Griswold said. “With COVID, you can’t really do that. So the board has actually been pitching in more just in terms of volunteer time.”

According to Executive Director Erin Donley Marineau, the organization has continued to contribute to the community by allowing for continued interaction with nature.

“Having the opportunity to connect with the natural world was important before the pandemic,” Marineau said. “Research shows that trees reduce stress. Trees make us less anxious. Trees bring out good, positive feelings in us that put our mental state in a different place where we can be more reflective.”

Marineau sees volunteering for Tree Davis as a way for the public to benefit from nature and receive something in return for the tax dollars they spend.

“This is really a refuge for the soul,” Marineau said. “This is time for people to be able to enjoy some simple beauty in life that is not directly costing them money. It’s something that is a part of our community public good that we’ve all invested in with our tax dollars and for the good people of Davis who donate to Tree Davis. They’ve invested in us.”

Dr. Greg McPherson, the vice president of Tree Davis and a U.S. Forest Service emeritus researcher, stated that planting trees in urban areas attracts biodiversity by developing an ecosystem’s understory, or the vegetation under a canopy of trees.

“It is not just trees, but there’s a whole variety of understory plants,” McPherson said. “Native plants attract pollinators—birds, butterflies, bees, […] and so it’s adding biodiversity, it’s taking areas that are monocultures of turf grass or use a lot of water or [are] overgrown shrubs and turning them into incredibly rich, diverse habitats.”

According to Marineau, another benefit of adding to what the Tree Davis site calls the “urban forest” of Davis is that it helps mitigate effects of global warming.

“Climate change is no longer something that we can talk about hypothetically in the future,” Marineau said. “Climate change is visible and happening now. This year was one of the longest summers we’ve ever had because we ended up with high temperatures early in the season.”

Tree Davis is currently implementing a grant program with the City of Davis to plant 1,000 trees by March 2022. In order to complete this goal, the organization needs to find property owners who are willing to have trees planted on their property.

One challenge Tree Davis faces is that community members may not be aware of the lasting benefits of trees, Marineau said.

“Part of the challenge in communicating the benefits of what we do is that trees are such long-lived organisms and in many cases they can outlive us,” Marineau said. “We live in such a fast-paced culture where we expect to see results immediately. When we’re planting, we are really keeping the long term perspective in mind.”

A barrier to finding property for the planting of trees, according to Marineau, is that a large portion of Davis’s population is students who live in apartments and would need permission from property owners to have trees planted on the property.

“Renters can definitely be advocates for what they would like to see in their spaces,” Marineau said. “I think a lot of times renters see themselves as kind of powerless. They just kind of have to deal with whatever’s there or perhaps they don’t feel invested in beautifying the property because they’re just going to leave in a year or six months.”

Another advantage of planting trees, McPherson said, is that they help decrease costs by performing various environmental functions.

“Trees are priceless, but there is a dollar value to all the things that trees are doing in terms of cleaning the air and saving energy and storing carbon and just improving our health and well-being, and […] that may be $1,500 a year,” McPherson said.

“Trees mitigate the urban heat island effect,” Marineau said. “They make it cooler and more livable for us, and if we have trees shading our homes or businesses or our schools, we spend a lot less money trying to cool those spaces. So, we save money on energy bills and we have fewer greenhouse gas emissions because we’re drawing less electricity from the grid to run our air conditioners.”

Marineau believes that trees in an urban environment should be viewed as more than garden decor.

“A lot of people think of trees as sort of like fringe benefits,” Marineau said. “They’re sort of like nice icing on the cake once you’ve taken care of everything else. I’m trying to really convey the message that trees are really essential, particularly where we live here in the Central Valley.”

McPherson said he sees trees as medicine for the soul amidst a tumultuous time.

“Recently, there has been a lot of research on the human health benefits of having trees in our environment, where we live, work and play,” McPherson said. “How it reduces stress, [connects you] to nature, it’s calming. […] Trees put a smile on my face. I think in the time of the pandemic, we can all use a smile.”
Written by: Lyra Farrell — features@theaggie.org