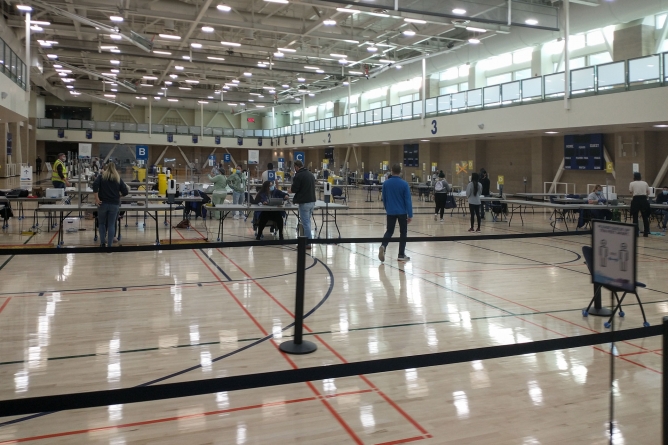 As COVID-19 cases at UC Davis rise significantly, the university now requires both students and faculty accessing the campus weekly to be tested every seven days before entering the campus.

Jennifer Butler, the director of student affairs marketing and communications, said via email that they have been informing students about updates throughout the quarter.

“Our plan was always to ramp up testing capacity and expand testing to our entire Aggie community, including all employees and students,” Butler said via email.

The new requirements went into effect on Nov. 18, the week before the Thanksgiving holiday.

There have been 45 positive asymptomatic COVID-19 tests on campus since Nov. 1, up from three in October, according to the UC Davis COVID-19 Dashboard.

The increased availability and access to testing for the full Aggie community has more than doubled the amount of tests being processed. On Nov. 17, 1,404 asymptomatic tests were administered and one positive result was reported. On Nov. 18, the date testing access increased, 2,711 tests were administered and eight positive results were reported, the highest number in a single day since September. This suggests that the rising number of COVID-19 cases at UC Davis may be connected to the rising number of tests, emphasizing the importance of testing the larger community to better see the actual prevalence of coronavirus in Davis.

Test results are expected to be available in 24-48 hours, but the new requirements do not make it necessary for the person accessing the campus to know the results of the test before entering campus, according to an email sent to students by Chancellor Gary May.

Previously, the administration had been relying on a self-reported daily symptom survey for anyone visiting campus instead of a weekly test.

The administration has moved the testing kiosk from the smaller pavilion location to the ARC to accommodate the increase in students and employees being tested.

There are currently 88 active cases that are being reviewed by Student Health or Occupational Health, according to the safety services self-report website; the vast majority of the cases being investigated are employees of the university.

Brian Trainor, a professor and the vice-chair of the psychology department, said he is still getting the hang of the new procedures.

Billy Lewis, a third-year communication major who lives on campus, said he was in and out of the testing facility in five to seven minutes.

“It was pretty fast,” Lewis said. “I’m really surprised at how available it is to us.”

Butler said via email that the testing process for the test has been simplified.

“During the initial pilot phase, the saliva screening process was backed up with a more traditional, certified testing process using nasal swabs,” Butler said via email. “After the saliva test was validated, we were able to expand capacity and additional groups of students and employees were invited to begin participating in the testing program.”

Though Trainor said students appear to be wearing masks consistently in the psychology department, he said the campus-wide usage of masks is a mixed bag.

“Maybe 70% of people are wearing masks outside,” Trainor said.

Lewis said he appreciated the increased availability of testing at the university as well as the convenience.

“I think it’s necessary because most of the counties in California are in the purple zone,” Lewis said.
Written by: Kathleen Quinn — campus@theaggie.org