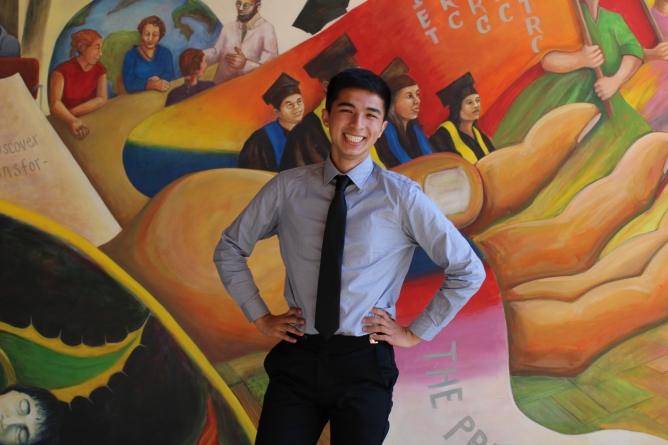 Photo Credits: Courtesy Photo. Khalil Malik is a third-year political science-public service major at UC Davis and has served as an ASUCD Senator since Fall 2019.

Khalil Malik, a third-year political science major, will finish his term as an ASUCD Senator next week. Malik reflected on his time in student government, highlighting his work for The Pantry and his involvement with the Sexual Assault Awareness and Advisory Committee (SAAAC).

“It’s honestly been the best part of my term—the units and committees,” Malik said. “[They] are one of the most essential parts of UC Davis, not just ASUCD. They’re mostly student-led, and you get to see a lot of talent. You get to see people passionate about what they’re doing, and I’m honored to have gotten the chance to have gotten to work alongside other student leaders.”

Malik noted that one of his proudest moments as a senator was when he accepted a check from Golden Credit Union on behalf of The Pantry at a UC Davis basketball game last summer. He also praised Pantry Director Ryan Choi for his work this year. Malik and Choi have worked on expanding The Pantry’s services, even with a decline in use due to the coronavirus pandemic.

“Right now one of the things that Ryan is currently working on is creating a career staff position to help out with the facilitation of the services provided by The Pantry,” Malik said. “While Ryan does an incredible job, it’s really a job for someone who can dedicate their full time to it. The Pantry has grown so exponentially throughout the last few years and it would be beneficial to bring in someone who can dedicate their sole focus to the Pantry.”

Being a senator during the pandemic has posed other challenges, too. Malik noted that smaller units within ASUCD suffer more, since outreach efforts are hampered by COVID-19.

“The Gender and Sexuality Commission does a lot of great work to help SAAAC when it’s inactive, but it would be great to have a full committee that could take on the issue as their sole focus,” Malik said.

According to Malik’s platforms when he was first running for office, he was planning to work on sexual assault legislation in partnership with CARE, an on-campus organization providing support to sexual assault and harassment survivors. Rachel Henry, the Outreach and Education Manager at CARE, said that the organization wasn’t working directly with Malik, although she did say he was part of a Zoom call with CARE director Sarah Meredith last May.

“Ultimately, my work with CARE [last] Winter Quarter was not as productive as I had hoped,” Malik noted in an email before the interview.

And in the interview, he discussed the challenges of student involvement in adjudicating issues of sexual assault and harassment on campus. Ultimately, individuals from CARE recommended that students should not be part of addressing these problems in the disciplinary context.

“I had a perception of the issue of sexual assault when I was running for Senate, but after many meetings, I realized it’s a lot harder because a lot of time the students involved in student government don’t have the training, background and knowledge to be judging their peers on the claims,” Malik explained. “That’s a job for CARE and different bodies. The challenge has been finding a system that works. The legislation that I proposed on the platform was just not the best way to go about it. That’s why I think having the Sexual Assault Awareness and Advisory Committee (SAAAC) is important.”

Still, Malik hopes that sexual assault and harassment prevention training will be implemented as part of the onboarding process for ASUCD senators and that more people will be made aware of reporting processes, which they can access with CARE on campus, among other organizations.

He said that the biggest challenge he faced as a senator was “internal knowledge and confidence,” or the ability to understand ASUCD as a whole organization.

“It was really intimidating and a lot of times I felt that I wasn’t the person who should be doing this—that I needed to look to other people with more experience,” Malik said. “To solve that, there should be more training in ASUCD to help people know what ASUCD is,”

“I think that [training] and communication are probably the biggest issues, and a lot of the time units and committees in ASUCD have the resources that other units need,” Malik said.

He described his most recent efforts to help establish an ASUCD newsletter.

Malik has also received praise from other members of the Senate. External Affairs Vice President Maria Martinez said that although she hadn’t worked with him directly, she was impressed by his efforts while serving as a senator.

“Personally, I think he’s one of the very few senators who actually consistently produces work of substance,” Martinez wrote via instant message. “He’s highly active within the campus community, participates in internal [ASUCD] logistics, and is an active senator during meetings. In terms of affordable housing, I think he did a great job at promoting Davis’s Measure B for this past election! Although it ended up failing, he was great at relaying information about the measure to the Senate table and encouraging folks to vote it through. Wish he wasn’t terming out, but I think he’s one of the good ones for sure.”