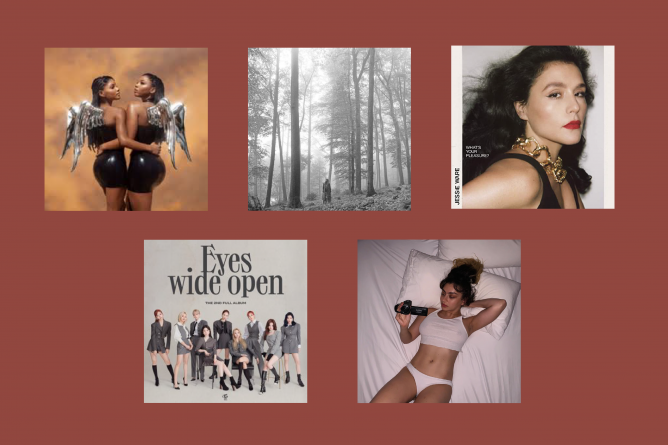 Music thrived in a year many would otherwise like to forget

In the onset of isolation in March, it became clear that either this period of time would either give us masterpieces or some of the worst music ever made. There were definitely some duds (I’m looking at you Justin Bieber) but ultimately, 2020 was a good year for music. These five albums proved themselves the best of tough competition.

Though TWICE has been topping charts around the world for half a decade, their second full album was only released this year. The nine-member K-pop girl group took their music to new heights with their genre-pushing sophomore album “Eyes Wide Open.”

With a group like TWICE, known for bubblegum poppy earworm tracks, audiences are desperate to see various sides of them. Though the cute concept they utilize fits them perfectly, the push for them to release darker music has been with them from their beginning. With synth-pop title track “I CAN’T STOP ME,” TWICE have found a way to hear the feedback, while never straying from the signature TWICE sound that has secured them as their generation’s top girl group.

The cohesiveness of the album is unlike any of their previous works—each song showcases a different genre. The ’80s American retro influence is quite easy to pick up on in several tracks, including “I CAN’T STOP ME” and “UP NO MORE.” They venture further into Japanese city pop than ever before on “SAY SOMETHING” with incredible results. They even throw in an unexpected sprinkle of dubstep on “GO HARD,” but if anyone can pull it off, it’s TWICE.

Each track just has this ability to fill you with energy. The sweetly produced, full of feeling “UP NO MORE” is definitely the stand out of the album. “DO WHAT WE LIKE” and “HELL IN HEAVEN” are also near the top, both showcasing TWICE’s varied vocal abilities and styles.

Lyrical simplicity is not a damper on the tracks. The English hooks stick in your brain from the first listen. “I CAN’T STOP ME’s” “risky risky, wiggy wiggy this is an emergency” is modern day Shakspeare. And I don’t think any lyric has ever hit me as hard as “QUEEN’s”  “you’re a queen”—like, thank you TWICE, I needed to hear that.

Though tragically overlooked, “Eyes Wide Open” was truly one of the best albums of the year. It displays better than ever that TWICE are an ever-evolving musical force.

Taylor Swift is no stranger to switching genres (the transition from “Speak Now” to “Red” to “1989” will be immortalized in the history books). But “folklore” is different from Swift’s previous ventures into uncharted music territory. It represents not only the transition from her previous polished pop albums into new indie influenced sound, but also a change in her intentions as an artist. “folklore” sounds like something she needed to release: less for everyone else, and more for her.

Every song feels like its own experience. Soft production leaves ample space to explore the lyrical content, and it’s the best Swift has ever been. Lead single “cardigan’s” lyric “I knew I’d curse you for the longest time/Chasing shadows in the grocery line/I knew you’d miss me once the thrill expired” captures the tragic and haunting beauty of her words. “folklore” is full of the kind of sentences that will keep you up at night.

The more you immerse yourself in the music, the deeper your connection to it becomes. At first somewhat forgettable, “august” has become my favorite song ever released by Swift. The sweeping background and guitar paired with some of her best lyrics (“Back when we were still changing’ for the better/Wanting was enough/For me, it was enough”) prove that she is a masterful storyteller and composer.

Though it was written by one of the biggest pop stars in the world, there is something about “folklore” that is so personal. Rationally, I know it went number one on practically every chart that exists, but I still have a moment of confusion when someone mentions a song from the album they like. Like how did you hear this indie album that only I know about?

The individual feeling of “folklore” shows that perhaps the greatest example of Swift’s artistry is her ability to make a highly specific lyric or experience feel like it can apply to anyone’s life. “folklore” is delicate and complicated. Swift has created an album that is impossible to forget.

The only album on this list that really captures the raw truth of pandemic isolation is Charli XCX’s “how i’m feeling now.” (See: “I miss them every night/I miss them by my side/ Catch my tears when I cry/My clique on me for life”). The former radio darling and current avant-garde pop connoisseur wrote and recorded the 11-track album in her home during the earlier months of the lockdown. It sounds like a compilation of her greatest hits rather than an album she made in less than six weeks.

Charil is the face of hyperpop, experimental music that relies on unconventional computer generated noises. Her songs normally feature heavily edited vocals over synthesizer so powerful it can sometimes sound a little scary. “how i’m feeling now” is her furthest venture from traditional pop yet, and it proves that the more out there the better for Charli.

She includes a gradient of emotionality throughout the album. There are her classic club bangers that were practically crafted to be blasted in some basement 50 people past its maximum capacity (“claws,” “detonate”) intertwined with tender tracks brimming with vulnerability. “party 4 u” and “forever,” two of the best songs on the album, prove she understands her genre so well that she can write tracks that cultivate a feeling of longing through words and style without having to strip them of their hyperpop production.

“how i’m feeling now” has some of the best songs of the year while simultaneously sounding like when you drop a spoon in the garbage disposal—proof that Charli XCX is a once-in-a-generation talent.

2. “What’s Your Pleasure?” by Jessie Ware

2020 has conjured up somewhat of a disco renaissance. The influence of the ‘70s sound reached everywhere with Doja Cat’s “Say So” and Dua Lipa’s “Future Nostalgia” topping the charts. It’s ironic timing considering there’s nowhere to actually dance, but that didn’t stop Jessie Ware from releasing the best disco album of the year.

The British artist’s fourth studio album “What’s Your Pleasure?” is an hour of masterfully produced dance tracks. Each song is its own experience, and builds the atmosphere of a neon nightclub. If you close your eyes while listening, you can almost see bright lights flashing behind your eyelids.

The song lengths average at around four minutes and 30 seconds, so each track feels like a composition. The more upbeat songs are brighter and faster and stand out in your first listen. “Ooh La La” feels like dance steps are hidden in the music, the moves just come naturally. “Soul Control” doesn’t take itself too seriously with lyrics like “Baby, it’s automatic/We touch and it feels like (woo!)” and uses Ware’s stellar vocals.

The other tracks are less noticeably upbeat, but still have a possessive quality that makes you need to move. The way “Spotlight’s” pulsating beat gets into your head is almost overwhelming. “The Kill” is similar. It’s romantic and dramatic and makes you feel like everything around you is moving in slow motion. The album closer “Remember Where You Are” sounds like the night is over, finishing the album with the powerful voices of a choir reminding you “The heart of the city is on fire/Sun on the rise, the highs are gonna fall.”

The album manages to balance sophistication and thrilling, consuming fun. It’s incredibly underrated but once you hear it, it will never leave your head.

Sister duo Chloe x Halle’s “Ungodly Hour” is the best album of the year. The duo’s vocals are their guide through these 13 songs, utilizing their voices as instruments. Older sister Chloe grounds the songs with her strong, controlled vocals while younger sister Halle’s voice floats atop the tracks. You can hear the meshing of their artistic abilities; the dynamic produces unique music while keeping the sound uniform.

The production manages to create somewhat of a signature sound for the duo. And it’s a sound that isn’t tied to convention. One of the album’s best tracks, “Tipsy,” a song that uses off-time beats and rapping to cement itself in your brain, was produced solely by Chloe. The thumping beats of the title track “Ungodly Hour,” produced by Disclosure, are sentimentally beautiful. “ROYL,” with its inquisitive lyrics “Won’t you live tonight? (For the rest of your life)/Could be paradise (never know ’til you try)/Running out of time (baby, get up and try)” is one of the most fun songs they have ever released. At its core, it’s beautiful music that lets you enjoy yourself.

What really secures “Ungodly Hour” as the best is Chloe x Halle’s commitment to visuals and performance. They have performed various tracks off the album on the majority of recent award shows. They always match their outfits, and curate a new elaborate set and performance fitting within the constraints of pandemic performing. It’s truly impressive how they have been able to turn their album into an audio/visual experience when no one else was able to make it work.

In a year of impressive albums “Ungodly Hour” came out on top. Chloe x Halle have proved they are some of the most talented artists on the scene.
Written by: Livvy Mullen — arts@theaggie.org