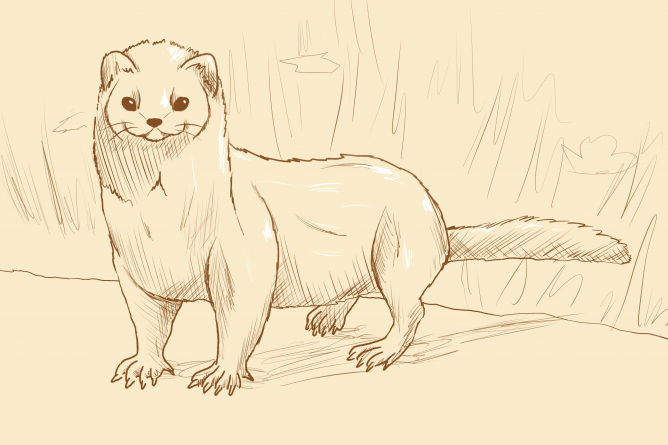 The Danish government ordered the culling of all farmed mink in early November after a mutation of COVID-19 had been discovered in mink populations. Authorities were concerned that the mutation could threaten the efficacy of a vaccine for humans since there have been some cases of COVID-19 transmission from mink to humans in Denmark.

Mark Cooper, an assistant professor in the department of human ecology and the department of animal science at UC Davis, researches the politics of infectious diseases and how humans interact with those diseases. Cooper notes that historically during disease outbreaks, large numbers of farmed animals were slaughtered over concerns that they can spread transmissible diseases to other species or that they will be hazardous for humans to consume if diseased.

An example is the mass cull of 380,000 pigs in South Korea in 2019 to contain African swine fever. There have been cases of culls of chicken farms in various places in the U.S. in response to bird flu. These massive culls leave many questioning livestock farming methods, according to Dr. Cooper.

“When a mass cull is ordered to contain a disease, it makes people question whether or not the way we use animals is as regular and as normal as it sometimes appears,” Cooper said.

Because of the crowded conditions on farms where livestock are raised, animals are prone to rapid transmission of pathogens, like the COVID-19 virus.

“When diseases move between different species, it can be very dangerous because that exchange is more likely to trigger mutations,” Cooper said.

In terms of disease spreading from humans to animals, there have been reports of a Pomeranian and a German Shepherd testing positive for the coronavirus in Hong Kong. There was also a case in Belgium where an individual who tested positive for COVID-19 transmitted the disease to their cat.

Animals contracting the virus is concerning because the viral genome sequence may experience mutations, insertion or deletions when contracted. House pets are most likely quarantining with their owners, which can help decelerate the rate of transmission, according to one article published in The Innovation.

The same article mentioned that a tiger tested positive for COVID-19 in the Bronx Zoo, and it was suspected that the caretaker was responsible for the transmission. Later in the same zoo, three African lions and three more tigers tested positive for the virus and showed similar symptoms to the first infected tiger, such as dry cough.

Samuel Díaz-Muñoz, an assistant professor of microbiology and molecular genetics at UC Davis, is familiar with animals contracting COVID-19 due to his research involving animal models to study respiratory diseases. The ferret, which is closely related to mink, is used often in influenza virus research.

“Mutations are what make the virus so adaptable,” Díaz-Muñoz said. “They occur so quickly that many of the mutations will end up killing the virus, but they produce so many of them that some of them do hit and make the virus more transmissible.”

According to a recent study, there are some changes in the strain of the COVID-19 virus that appear to be adaptations without cause for immediate concern.

“All the mutations that are in the mink population have occurred also at some other point in the human population,” Díaz-Muñoz said.

Díaz-Muñoz described the virus returning to the human host as a spillback,defined as when the virus returns to the old host from the novel host it infected.This is evident because it has been transmitted from bats to humans, humans to mink and mink back to humans.

A similar phenomenon happened with the H1N1 virus. Humans gave the virus to pigs, and the crowded conditions where the pigs lived caused the virus to replicate and create more variants. This led to a higher probability that a variant would be produced with the right genetic combinations to return to the human population, potentially being more deadly and having a higher transmission rate, according to Díaz-Muñoz.

In reference to how the transmission to animals will affect the vaccine, Díaz-Muñoz believes there is no need for concern. The new technology that is being used to develop the vaccine allows for modifications if the virus fluctuates. Also, the virus would need to be widespread in animals for it to impact the vaccine, and currently there are more human infections than any other animal infections, according to Díaz-Muñoz.

“It is something to keep an eye on, but not something to be worried about,” Díaz-Muñoz said.
Written by: Francheska Torres — science@theaggie.org