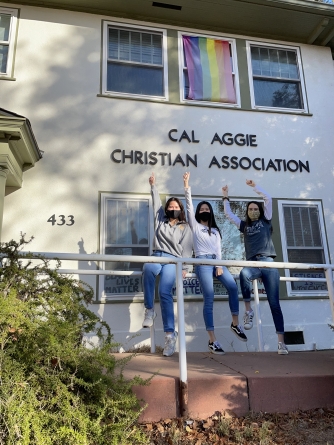 UC Davis students Ashley Lo, Allie O’Brien and Katie Shen will be opening Aggie House, a transitional living space for students who are homeless or experiencing housing insecurity, during the 2021-2022 school year. Aggie House will be funded by a Basic Needs Student Innovation Grant which seeks grant proposals for student-run basic needs initiatives.

Lo, a third-year economics and political science double major, said that the COVID-19 pandemic has exacerbated students’ struggles with housing and food insecurity.

“A lot of students have lost their jobs or their hours have been cut back for on-campus jobs,” Lo said. “A lot of landlords and property managers in Davis have not let people back out of their leases. Some people are trying to move back home to take care of family and siblings while their parents go to work. But a lot of them are still paying rent at the same time. That has affected their finances. The thing that makes a big difference is that inability to pay rent and that’s made students afraid of not having somewhere to stay.”

Lo said that the biggest obstacle Aggie House faced initially was skepticism about students’ ability to implement such a large-scale project.

“Small steps lead to bigger steps,” Lo said. “When we first started, we were emailing non-stop to anyone who would listen to us. To anyone who would give us a chance. A lot of people just shut us down and said, ‘We’re not interested, sorry.’ We gained more wind behind us as people saw that we were thinking through obstacles and had plans to overcome them.”

O’Brien, a political science and sociology double major, said that there is generally a lack of data surrounding housing security and homelessness within the UC.

“Anecdotally, we know a lot of these things are affecting students, but it’s likely that this is a lot more of a widespread issue,” O’Brien said. “This is a hole in the university administration—the UC system and UC Davis don’t have really good data on housing insecurity. We’re trying to put together an annual survey to track the data long-term.”

The most recent basic needs survey was conducted by the Graduate Student Association (GSA) in partnership with ASUCD during the 2017-2018 school year. According to that survey, approximately 18% of UC Davis students had experienced homelessness or housing insecurity during that year and 2% of the students surveyed had lived in their car or another space not intended for housing.

“If this is representative of the UC Davis population at large, this could mean that over 2,000 students are affected by homelessness in any given year,” Lo, O’Brien and Shen wrote in their grant proposal for Aggie House. “Considering the stigma associated with being a student experiencing housing insecurity or homelessness, many students remain fearful of discrimination they may face upon seeking relevant resources.”

Underrepresented minority students on campus are disproportionately affected by such issues, the proposal notes. Moreover, LGBTQ+ students are reportedly twice as likely to experience homelessness than their non-LGBTQ+ counterparts. Homelessness is particularly prevalent among independent students—meaning emancipated minors, self-supporting students, students recently homeless and students who were in foster care after the age of 13.

First-generation students also face significant obstacles to finding housing due to a “lack of guidance” in managing their financial aid and in navigating the university system at large, according to the grant proposal. Many face financial obligations to their families back home. International students lacking social security numbers or credit history also struggle to find off-campus housing. Others have found their financial aid packages insufficient and are working several jobs to support themselves, particularly when their aid packages run out at the end of the term, coinciding with final examinations.

The idea for Aggie House stemmed from the information outlined in the GSA survey, and also from Lo’s work on the Internal Affairs Commission within ASUCD. She is now a student advocate there and much of her work focuses on basic needs accessibility. Through her work, Lo learned about other student-run transitional living spaces at UCLA and the University of Southern California. She, O’Brien and Shen decided that such an organization was needed at UC Davis too.

Aggie House will operate under the auspices of Students 4 Students, a non-profit founded at UCLA and formerly known as the Bruin Shelter. Students 4 Students is the first organization in the nation to exclusively serve college students experiencing homelessness.

According to Shen, a third-year genetics and genomics major, Aggie House will be renting a space from the Cal Aggie Christian Association on Russell Boulevard. The house has six bedrooms, one of which will probably be turned into an office space. The other five will each have two people in them, meaning that the organization will serve 10 students during fall 2021, its inaugural quarter.

Residents will stay for the duration of the academic quarter and will have access to food, shelter and case management services there. They can also re-apply for housing if they have not found stable housing elsewhere.

Aggie House also intends on fostering community building among its residents, according to O’Brien.

“Part of building community is often [based on] where you live, and people are missing that when they have housing insecurity,” O’Brien said. “We have a four-pronged basic needs approach: housing, food, social case management and community—four pillars making sure all of your basic needs are there so that you can focus on academics.”

Although members of Aggie Compass, Basic Needs, GSA and students and professors in the UC Davis School of Education and the School of Medicine have expressed interest in Aggie House, the organization is still seeking volunteers familiar with case management services. These services could include helping students access healthcare, insurance and affordable housing during their stay at Aggie House.

“We’re students and we’re not the best people to offer case management services, but we want to be able to provide the space and the framework for that,” said Lo, noting that transitional housing organizations at UCLA and USC have received help from people studying social work and public policy.

Lo said they’re hoping for between 60 and 70 volunteers.

“Our pilot year (2021-2022) will definitely solidify logistics and ease some of the skepticism [about Aggie House],” Shen said. “The hardest part is going to be maintaining funds and applying for enough grants and community fundraising to keep providing this service for students.”
Written by: Rebecca Bihn-Wallace — campus@theaggie.org