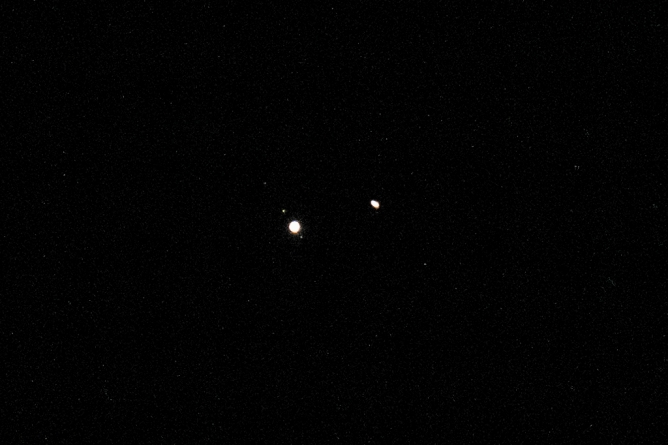 During the rare event, Jupiter and Saturn appeared in the sky as the closest they have been in 400 years

The “Great Conjunction” of Jupiter and Saturn occurred on Dec. 21, 2020 when viewers in California and across the globe eagerly watched for the appearance of the two planets. Approximately once every 20 years the positions of Jupiter and Saturn are aligned closely in the sky, but it has been about 400 years since the planets were this close to each other and about 800 years since this alignment happened at night, according to an article by National Aeronautics and Space Administration (NASA).

Pratik Gandhi and Patty Bolan, PhD students in astrophysics at UC Davis, missed the event due to foggy weather in the San Francisco Bay Area but were able to witness it through the many pictures taken by astronomical websites. Gandhi was intrigued by the images captured by radio telescopes since images of the solar system tend to use optical imaging.

“Generally, there are telescopes specific to each band in the electromagnetic spectrum,” Gandhi said. “This is the first time I’ve seen planets imaged in things outside the optical part of the spectrum.”

Bolan, who is working on her thesis project studying the first galaxies that formed, believes events like the “Great Conjunction” grab the public’s attention because modern technology makes them more approachable by having images of the event accessible online. It also offers another perspective of a bigger picture that exists outside life on Earth.

“It makes you forget about earthly things, […] like everything seems so minor on Earth if you think about all these crazy things that are happening in space,” Bolan said.

Phenomenons like the “Great Conjunction” are perfect opportunities for public outreach about astronomy since the topic appeals to so many people, according to Bolan. Gandhi noted that astronomy is not a very applied science like physics or engineering where topics are mostly applied to building new things and creating devices.

One form of outreach both Bolan and Gandhi participate in is Astronomy on Tap, a program hosted by Sudwerk Brewing Co. in which guest speakers give short talks every month about astronomy. The events are currently canceled because of the pandemic, but if there had been a meeting in December, the “Great Conjunction” would have been one important topic of discussion.

Though astronomical events like the “Great Conjunction” occur due to the alignment of planets, ancient cultures have historically interpreted these events astrologically to try and predict things that will happen on earth.

Pat Boeshaar, a professor in astrophysics from the department of physics and astronomy, is familiar with the history of astrology. According to Boeshaar, Chinese astrologers looked at the sky to predict what would happen to the emperor more than 2000 years ago, and the ancient Babylonians around 2000 B.C.E. had a form of calculus to predict planetary positions.

“If you go back in history, you are going to find understanding the sky led to revolutions in mathematics and our understanding of the world we live in,” Boeshaar said.

Marusa Bradac, a professor from the department of physics and astronomy, knows that by using physics to calculate orbits, astronomers know the orbits of planets extremely well. This is how the “Great Conjunction” was predicted for Dec. 21, 2020.

“Putting in the laws of physics, you can actually figure out where planets are going to be at any given time in the future,” said Bradac.

In terms of the “Great Conjunction,” a specific calculation was described by Boeshaar.

far away—Jupiter will be in the exact same spot in 12 years but Saturn will have moved a bit ahead of that spot in that time,” Boeshaar said. “It will take about 20 years for Jupiter to catch up and be conjoined with Saturn in approximately the same place on the sky.”

Boeshaar, along with her husband, were able to see the aftermath of the conjunction on Dec. 23, 2020 when the planets were one-fourth of a degree apart and capture an image using a handheld camera. Some viewers used a tripod to capture a timed exposure, but according to Boeshaar using a handheld camera was the best way to get an image that gives a sense of what an individual would see just looking up at the sky.

Instead of spending a lot of money on a telescope, Boeshaar advised viewers to use low power binoculars because the higher the power of the telescope, the more you magnify the atmospheric disturbance and affect the image. If an individual has a telescope, using a 50, 60 or even 100 power lens is the way to go.

There are also plenty of local astronomy clubs that have the equipment to capture these events and make them accessible to the public. Using their amateur-type telescopes can yield great results in contrast to larger professional telescopes that usually are not successful in imaging these types of events, according to Bradac.