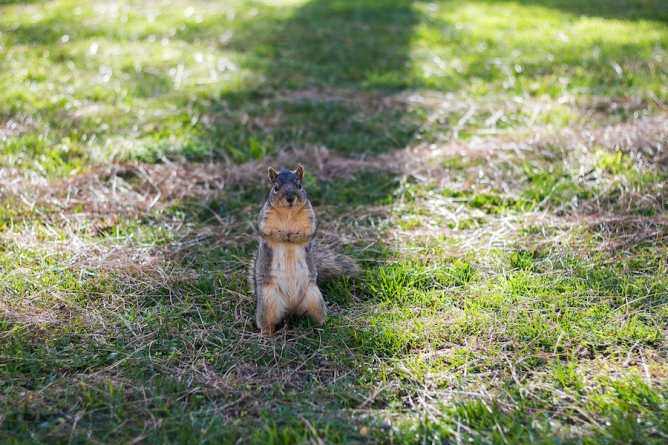 Weeks ago, I found a dead squirrel. You may be sitting at home reading this thinking, “This isn’t newsworthy,” or maybe even: “I think this guy killed a squirrel.”

This isn’t my first rodeo—and by this I mean that I have come across many dead squirrels in my time on the planet. Due to a past issue with the rodent law, I must reiterate that I had nothing to do with any of the squirrel deaths that I have discovered. The squirrel district attorney has nothing on me, and he never will.

I digress. This wasn’t the usual squirrel pancake slowly becoming one with the asphalt. This squirrel was intact, frail and lifeless, just lying there in the middle of the sidewalk. How did it get here? What was its story?

I attempted to talk to squirrels in the area for hours, but they dodged my requests. They ran into moving traffic and scurried up trees just to get away from me. They scuttled past the lifeless husk of their fellow squirrel like it wasn’t even there.

The obvious answer to all of this was that squirrels die of natural causes sometimes. Case closed. Or was it?

No, far from it. This was evidence of a rot in squirrel society. An indictment of a caste system masquerading as a meritocracy. This squirrel was set on this path from the day it entered this world.

I turned around to look back at the dead remains of the squirrel and it had vanished. Gone. Like it never existed. Like squirrel elites don’t want the general population to be reminded of its society’s failings.

As I was walking away, realizing that I had stumbled upon something bigger than just a dead squirrel, I saw something in the corner of my eye—the squirrel I presumed dead running up a tree. I guess squirrels sometimes just sleep in the middle of the sidewalk. Case closed, I am an idiot and not at all credible.