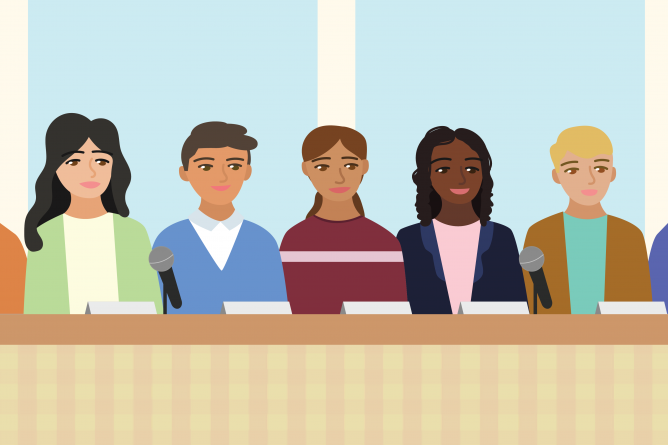 After all the ballots were cast and the results were announced for ASUCD’s Fall Quarter elections, the six newly elected senators expressed their excitement to represent the student population at UC Davis. As Winter Quarter begins, these senators discuss their first steps towards achieving their long-term goals.

Maahum Shahab is a second-year international relations major. Shahab’s primary goal is to implement legislation that helps protect student activists. She stated that student activists, especially students of color, on college campuses are often targeted for speaking out in support of the causes in which they believe.

“In a country where we value freedom of speech so much, we need to be placing those protections on not just a select few, but on everyone who uses it,” Shahab said.

Another focus of Shahab’s is housing advocacy, especially improving housing policies that impact students who have been affected by the COVID-19 pandemic. In addition to this, Shahab would like to combat sexual assault culture on campus, especially as domestic violence rates increase during the pandemic.

The first steps that Shahab would like to take in achieving her goals involve learning and building relationships with her fellow senators, ASUCD personnel and other students.

“I think the biggest thing we can do is really listen to each other [to] understand where we’re all coming from [and] be friends,” Shahab said. “It’s also important to understand that we’re fellow students who genuinely care about the community. So why don’t we try to understand each other and build those relationships, so that we can work better together?”

Similar to Shahab, Kabir Sahni, a third-year double major in international relations and communication, mentioned his goals of uplifting marginalized communities and bridging the gap between ASUCD and the communities it serves.

Kristin Mifsud is a second-year political science major. One of her main goals is to increase neurodiversity awareness on campus. To work toward achieving this, Mifsud has met with the Autism and Neurodiversity Community, the vice chancellor of Student Affairs and the head of the Student Disability Center (SDC) about implementing neurodiversity seminars, during which individuals can learn about neurodiversity. Mifsud is also working with fellow newly elected Senator Ryan Manriquez, a third-year political science major, and the External Affairs Commission (EAC) to find a new chair for ASUCD’s Disability Rights and Advocacy Committee (DRAC) as the position is currently vacant and the committee has been decommissioned.

“As an individual with ADHD, I have seen on campus the lack of knowledge about neurodiversity and the understanding about what it is and how it affects individuals,” Mifsud said. “So I want to bring more awareness to that and also help people who are neurodiverse get more resources and know that the resources are there to help them.”

Manriquez hopes to provide equal opportunities and support for students with disabilities through this collaboration with Mifsud to reestablish DRAC. He hopes to find a qualified candidate for the chair who can effectively represent the disability community at Davis.

“[DRAC] is a committee that hasn’t been active for a few years, and it’s vital,” Manriquez said. “It’s the bullhorn for the disability community here. So that’s something that needs to be brought back as soon as possible, to make sure that those voices are heard that are marginalized off very often.”

Manriquez also hopes to spend Winter Quarter working with ASUCD’s many units and committees and specifically lend support to the Transfer and Reentry Committee at ASUCD.

“As a transfer student, and as the only transfer student on the Senate table, I feel a great responsibility to bring that perspective,” Manriquez said. “That’s something I want to do often because transfer students make up a big population here at UC Davis.”

Michael Navarro, a first-year political science-public service major, aims to increase diversity at the Senate table and throughout all levels of ASUCD for the long term. He especially wants to advocate for the needs of Dreamers, raise awareness for safe same-sex practices within the LGBTQ community and implement more awareness and safety precautions surrounding COVID-19 on campus.

Navarro would like to focus on the disbursement of DACA vouchers, which were supposed to be passed out to Dreamers last quarter in response to COVID-19. These vouchers were intended to financially help students who did not receive stimulus checks from the government.

“One goal I have is to show the Dreamers and other minorities that ASUCD is here for them, and they shouldn’t go back on their word,” Navarro said. “Students on campus do need that financial support because it’s not being given to them through the government. And if they can’t rely on student government either, then there’s a really big mess up there. So I want to just show them that this was promised, this is something that we should be working on and this is something that you do deserve.”

Lauren Smith, a second-year double major in political science and communication, wants to advocate for mental health support through the pandemic and promote cultural awareness on campus. She is planning to work with the EAC to provide mental health resources off campus in addition to Student Health and Counseling Services.

“I think that in order for students to have access to proper mental health resources and to get the help they need, it would be beneficial for them to be connected to off-campus counselors, therapists, psychiatrists,” Smith said. “Just working with the students to let them know that there are other options.”

Smith would also like to work with the EAC and the Business and Finance Commission to highlight small businesses in Davis, which have been impacted by the pandemic.

“It’s really hard to be in a college town because the economy is very dependent on the college students,” Smith said. “With the pandemic, a lot of Davis businesses have had to close on and off, and some of them have had to close permanently. So we should make sure that we’re supporting our economy. And then maybe someday, when the businesses are back on their feet, we would be able to partner with them for fundraisers, so that both the business and the students could benefit.”

All six senators expressed the same sentiment that the best way for Davis students and community members to help them make meaningful changes on campus is by openly communicating their questions and concerns. While each senator has their own goals that they would like to achieve, each stated their desire to serve the needs of the entire student body and to tackle issues that are important to them. Students can express opinions and raise issues at ASUCD Senate meetings, reach out to the senators through email, attend office hours, stay connected via ASUCD’s social media and share their concerns in the Anonymous Senate “Comment Box.”
Written by: Liana Mae Atizado — features@theaggie.org